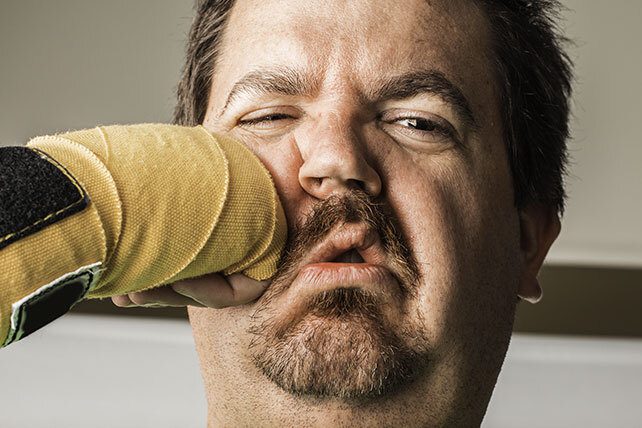 Whether it’s the pastor’s hat or therapist’s hat I was wearing at the time, so many of the people I’ve worked with over the years are people who have been bludgeoned and knocked down by life. The mission at that moment? To help them get up and try again. It’s the only way forward to eventual victory.

I’ve never been a boxer, but there was a moment in seventh grade when the P.E. teacher decided we’d spend a class doing some boxing. My opponent was the biggest guy in the class, and while I was still putting my gloves on he sucker-punched me, landing a few blows directly to my surprised face. That moment brought to me an awareness of two things: first, that I could take a punch pretty good, and second, I didn’t like being hit in the face.

Most of us don’t.

But in this life we’ll take some punches to the face, some blows to our life, we’ll experience some problems. Jesus described this truth like this:

“I have told you all this so that you may have peace in me. Here on earth you will have many trials and sorrows ” John 16:33 (the first half of the verse)

If you want to accomplish anything of value during your life, chances are you’ll be punched in the face by opposition, if not knocked down multiple times. The great challenge or adventure in making your way to a victory is to get up and try again. Pastor Charles Swindoll gives additional insight to this in his book, “Growing Wise in the Seasons of Life,” by noting this of Evel Knievel’s risky ways:

The ancient city of Jericho was defeated because Joshua and his troops defied the “normal procedure” of battle, never once fearing failure. The Gentiles heard of Christ Jesus because Paul and a few companions kept getting back up after being knocked down. Peter’s two letters are in the Book because he refused to live in the shadow of his bad track record.

Great accomplishments are often attempted but only occasionally reached. What is interesting (and encouraging) is that those who reach them are usually those who missed many times before. Failures, you see, are only temporary tests to prepare us for permanent triumphs.

Whoever you are today — listen to me! Sitting there licking your wounds will only result in a bitter aftertaste. Get up, get on with it, and try again! If you’re looking for an absolute guarantee against future failures, I know of only one — death.

How did these faithful men become victors? How did they find the strength to get up and try one more time? The quote above from Jesus about the troubles we will face in this world was only the first part of the statement. Here is His statement in full:

“I have told you all this so that you may have peace in me. Here on earth you will have many trials and sorrows. But take heart, because I have overcome the world,” John 16:33.

Jesus has succeeded in every way that we have failed, and with Christ in us, we discover a new capacity through Him to get up and try again.

Today, you may be feeling like the biggest bully on earth has landed a crushing sucker-punch square in your face.

Get up and try again.

This article urging us to try again originally appeared here, and is used by permission.