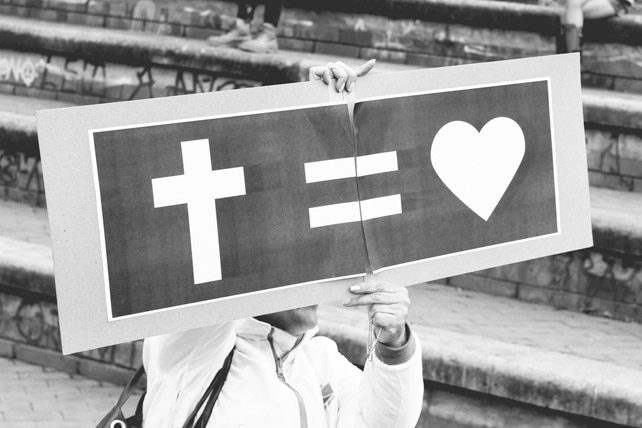 We live in a day of deeply contentious disagreement on any number of things, but most of it is political in nature or over things that, while not overtly political, have been politicized. When we disagree with each other, we have two choices: We can maintain the ultimate mark of a Christian, or we can abandon and betray it.

In the biography of Jesus written by John, we have the poignant final words and prayers of Jesus to His disciples before His death on the cross. It is considered by many to be among the most moving sections of the New Testament.

So what occupied Jesus during the moments before His death?

Not surprisingly, He wanted the world to know that His death was a sacrificial one—that He was laying down His life for theirs, paying the price for their sins, and offering His death as a gift so that they could receive forgiveness and enter into a full, intimate relationship with God the Father.

But how would that happen?

How would people know, beyond a doubt, that what Jesus was offering was from God? How would they know that Jesus Himself was God the Son in human form, come to planet earth to show the way? How would it be authenticated in a way that would be unmistakable and would force people to reckon with it?

Most would say, “the resurrection,” and that would not be wrong. But it’s not what Jesus suggested on the night before He died. He said that one thing, and one thing only, would confirm it all before a watching world:

… Loving unity among His followers.

And to drive this home, He first commanded it (John 15:9-12), and then prayed specifically for it (John 17:20-21). To Jesus, the observable love between those who called themselves His followers was everything. It would be this unity that would arrest the world’s attention and confirm that He was from the Father.

We often marvel at the growth of the early church—the explosion of faith in Christ in such numbers and speed that in only a blink of history, the Roman Empire officially turned from paganism to Christianity. We look for formulas and programs, services and processes. The simple truth is that they fleshed out the challenge and prayer of Jesus. As the second-century writer Tertullian noted, the awed pagan reaction to the Christian communal life was, “See how they love one another.”

When the Bible talks about such loving unity, it doesn’t mean uniformity, which is everyone looking and thinking alike. And the biblical idea of unity is certainly not to be confused with unanimity, which is complete agreement about every petty issue across the board. By unity, the Bible means first and foremost a oneness of heart—a relational unity.

This involves being kind to one another, gracious to one another, forgiving of one another – not assuming the worst, shooting the wounded or being quick to be suspicious. Biblical unity is about working through conflicts, avoiding slander and gossip, and being generous in spirit.