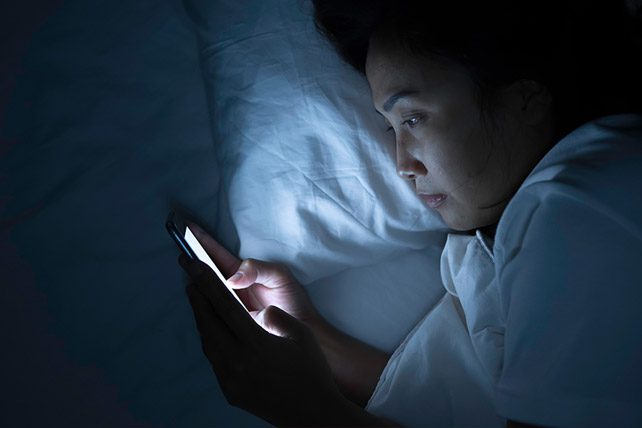 Generation Z is spending, on average, nine hours a day in front of one screen or another—meaning TV, video games, smartphones or tablets. What does that level of online consumption do to individuals and society in general? There are at least five areas where we know the effect is not a positive one.

First, it’s hurting our kids. According to a major study of nearly 10,000 teenagers by University College London and Imperial College London, social media damages children’s mental health by “ruining sleep, reducing their exercise levels and exposing them to cyberbullies in their homes.” In fact, “using sites multiple times a day increases the risk of psychological distress by around 40 percent, compared to logging on weekly or less.”

Making matters worse, children’s screen time doubled during the pandemic and, according to researchers from the University of California-San Francisco, hasn’t gone down since. Adding to the concern is that this does not include the time spent on computers for schoolwork as researchers focused exclusively on recreational activities such as social media, texting, internet surfing and watching or streaming movies

Billie Eilish, one of the biggest Gen Z musical stars and the youngest person in history to win all four of the top Grammy awards in the same year in 2020, has spoken freely about her addiction to pornography, starting from age 11, and how it not only gave her nightmares but affected her later dating life.

Third, it’s costing us community, or at least previously available dynamics of community. Consider dating. Singles today complain about the pitfalls and disappointments of online dating, as if it is the only kind of dating there is. In truth, it represents a radical cultural departure from what had been the norm. Online dating is radically individualistic, as opposed to the more communally based dating of the recent past. Instead of friends and family making suggestions and introductions, it is now an algorithm and two rightward swipes. As an article in the Atlantic puts it:

“Robots are not yet replacing our jobs. But they’re supplanting the role of matchmaker once held by friends and family…. [For] centuries, most couples met the same way: They relied on their families and friends to set them up. In sociology-speak, our relationships were ‘mediated.’ In human-speak, your wingman was your dad.”

Translation: Tinder, OKCupid and Bumble have taken the place of community. No longer are those most intimate with us serving and guiding and counseling; “now… we’re getting by with a little help from our robots.” Even those most involved lament “the spiritual bankruptcy of modern love.” Or as one person put it, the rise of online dating reflects “heightened isolation and a diminished sense of belonging within communities.”

Fourth, it’s making us angrier. Polling reveals two things we all seem to agree on: people are more likely to express anger on social media than in person (nearly nine in 10), and we are angrier today compared to a generation ago (84%).

According to an NPR-IBM Watson Health poll, the more we go online to check the news or use social media, the angrier we become. The reasons are not hard to diagnose. News outlets are often openly biased toward a particular view (thus inciting emotions), and there is a cottage industry of trolling on social media. In other words, we’ve created a context for anger to be incited and expressed, and it’s working.