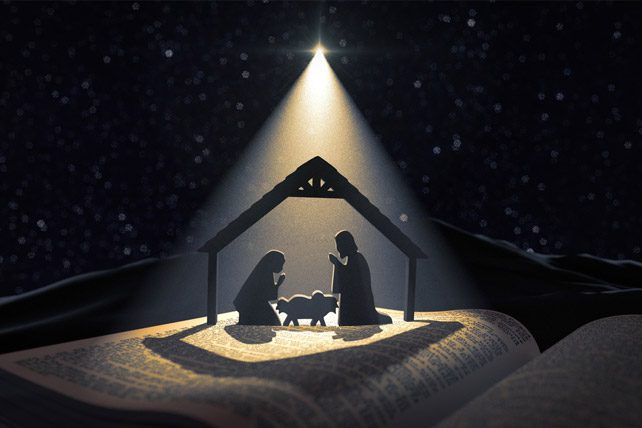 On the night Jesus was born something spectacular took place. The plains of Bethlehem became the theater for one of the most spectacular sound-and-light shows in human history. All heaven broke loose.

Luke tells us what happened:

And there were shepherds living out in the fields nearby, keeping watch over their flocks at night. An angel of the Lord appeared to them, and the glory of the Lord shone around them, and they were terrified. But the angel said to them, “Do not be afraid. I bring you good news of great joy that will be for all people. Today in the town of David a Savior has been born to you; he is Christ the Lord. This will be a sign to you: You will find a baby wrapped in cloths and lying in a manger.”

Suddenly a great company of the heavenly host appeared with the angel, praising God and saying, “Glory to God in the highest, and on earth peace to men on whom his favor rests.” (Luke 2:8-14)

The angelic visitor was surrounded by the glory of God. The glory was shining. This glory did not belong to the angel himself. It was God’s glory, signifying His divine mode of being. It was the divine splendor that shrouded the heavenly messenger, a visible divine radiance.

When the shepherds of Bethlehem quaked in fear, they were admonished by the angel: “Do not be afraid, for behold I bring you good tidings of great joy which will be to all people. For there is born to you this day in the city of David a Savior, who is Christ the Lord” (Luke 2:10-11, NKJV).

Every human being longs for a savior of some type. We look for someone or something that will solve our problems, ease our pain, or grant the most elusive goal of all, happiness. From the pursuit of success in business to the discovery of a perfect mate or friend, we make our search.

Even in the preoccupation with sports we show a hope for a savior. As a sports season ends with far more losers than winners, we hear the cry from cities across the land—“Wait till next year!” Then comes the draft or a new crop of rookies, and the fans pin their hopes and dreams on the new kid who will bring glory to the team. The rookie, the new client, the new machine, the news that will arrive in tomorrow’s mail—all are invested with more hope than any creature can possibly deliver.

The burst of light that flooded the fields of Bethlehem announced the advent of a Savior who was able to do the task.

We note that the newborn Savior is also called “Christ the Lord.” To the astonished shepherds these titles were pregnant with meaning. This Savior is the Christ, the long-awaited Messiah of Israel. Every Jew remembered the promise of God that someday the Messiah, the Lord’s anointed, would come to deliver Israel. This Messiah-Savior is also Lord. He not only will save His people but He will be their King, their Sovereign.

The angel declares that this Savior-Messiah-Lord is born “unto you.” The divine announcement is not an oracle of judgment but the declaration of a gift. The newborn King is born for us.