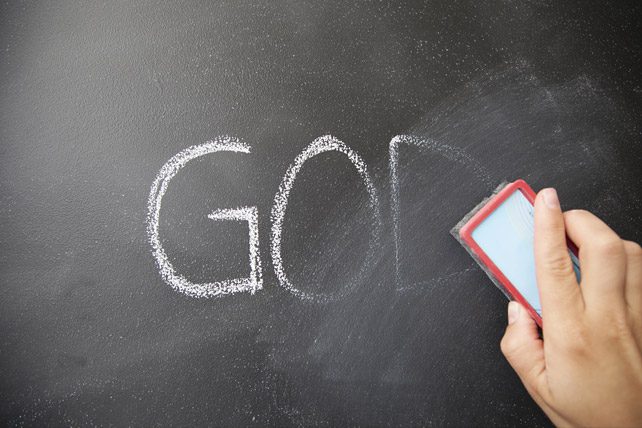 In 1880, Charles Bradlaugh was elected as a member of the Parliament of the United Kingdom for the Northampton district. His constituents knew he was an atheist who liked to publicly challenge Christians but didn’t think it would affect his work in parliament. They were proven wrong on his first day as their MP. He objected to taking an oath of allegiance before God, on the grounds that God did not exist. He asked to be allowed to make a good old-fashioned ‘cross my heart’ promise and leave God out of it. This request was denied on the grounds that if there were no God then there would be no morality, no right and wrong, no truth or lie, and the oath would be meaningless. So, Bradlaugh forfeited his seat in Parliament, but … I kid you not … he kept sneaking in to vote. On three occasions he voted without anyone noticing that he had snuck in. On other occasions, he was caught and escorted out of the building by police. He thus proved the ruling against him right: that a man that does not believe in God doesn’t believe in any authority.

One of Bradlaugh’s publicity stunts backfired badly when he challenged a pastor, Hugh Price Hughes, to a public debate on the validity of belief in God. Hughes immediately accepted the challenge but added one of his own.

Hughes said, “I propose that we each bring some concrete evidence of the validity of our beliefs in the form of men and women who have been redeemed from their lives of sin and shame by the influence of our teaching. I will bring 100 such men and women, and I challenge you to do the same. If you cannot bring 100, Mr. Bradlaugh, to match my 100, I will be satisfied if you will bring 50 men and women who will stand and testify that they have been lifted up from lives of shame by the influence of your teachings. If you cannot bring 50, then bring 20 people who will say, as my 100 will, that they have a great joy in a life of self-respect as a result of your atheistic teachings. If you cannot bring 20, I will be satisfied if you bring 10. Nay, Mr. Bradlaugh, I challenge you to bring one, just one man or woman who will make such a testimony regarding the uplifting of your atheistic teachings.”

Charles Bradlaugh, after a few days, withdrew his challenge for the debate.

I can’t help but wonder what God thinks of Mr. Bradlaugh’s efforts. Psalm 53 might provide the answer.

1. Designation of the Godless

Sometimes by changing the name of something, we change the perception. Short people are “vertically challenged,” unemployed people are “between jobs.” Those who disbelieve God’s existence are no longer called the godless, they are given a respectable sounding sobriquet of ‘a-theist’—without theism.

But the Bible cuts through all that political correctness and goes for the jugular of truth, calling those who reject God…fools.

The designation fool is not exactly what you might have in mind, because in our vernacular it has come to include the connotation that the person is simple-minded. A fool in English could be a person who behaves in a way that is—shall we say—‘educationally challenged.’

But the Hebrew word nabal refers specifically to a moral, willful ignorance, and has nothing to do with intelligence. Atheists can be—and often are—very intelligent, educated, erudite people. But they are fools because they willfully deny reasonable evidence for the existence of God.

They may have multiple degrees in botany from the best universities, but if they can’t look at a flower and know God exists, they are willfully ignorant, they are people who “… by their unrighteousness suppress the truth” (Romans 1:18).

And the irony is that atheists think that we believers are fools for believing in a God we cannot see.