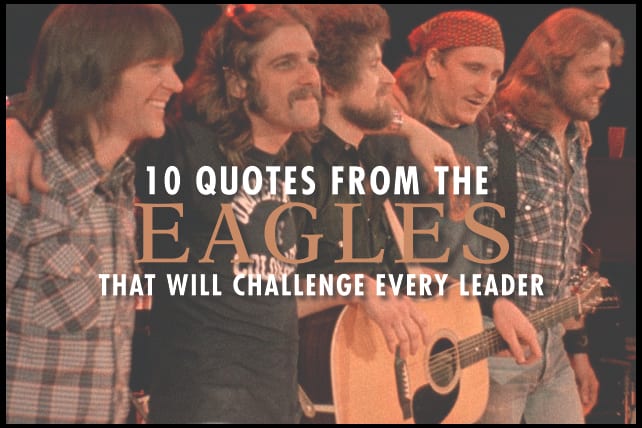 Music is the fuel for so much in life and even in leadership.

When I was a kid, Eagles’ music was all over the radio, and thanks to the birth of the classic rock format in music, their music never really disappeared.

While I always liked them, they weren’t one of my go-to bands until I rediscovered them a few summers ago while writing a book. I downloaded one of their albums, then more, and was amazed not only by their musicianship but by their lyrics.

Over the last few years, I’ve not only enjoyed their music in a fresh way, but their lyrics inspired me to think through some of the deeper issues of life and leadership.

Last summer I watched the History of the Eagles documentary—a fascinating study in leadership and human dynamics as the band pretty honestly talks about the tension of being a band and the ups and downs that came with it. It’s actually an intriguing study for anyone who leads a team. And the music is pretty amazing.

Glenn Frey’s recent death not only saddened me, but made me reflect back on his writing. Don Henley and Glenn Frey had a way of capturing life in their lyrics that is both accurate and a little too true.

If you’re like me, you’ll agree that leaders can learn from anywhere.

Their lyrics have actually helped me become a better leader; some of their insights really jump out at me.

I realize songs can be personal things, and no one really knows what the band meant anyway, right?

But each of these phrases have come to mean something to me as a leader and as a Christian (even though the band themselves would not call themselves Christian).

The lyrics below are Ecclesiastes-like observations on life that make me think…again and again.

With poignant honesty, the lyrics reflect the reality of life, ambition, relationships, success and disappointment.

Here are 10 Eagles lyrics that challenge me as a person and leader every time I hear them:

1. Don’t Let the Sound of Your Own Wheels Make You Crazy

That happens, doesn’t it?

It’s so easy for leaders to become self-absorbed.

Often, you end up having conversations with yourself that never end, that loop in your mind again and again. You think about what you’re leading day in and day out.

When that happens, you almost end up taking yourself too seriously.

Eventually, if you’re not careful, leadership can make you obsessed until you’re no longer fun to be around.

Leaders who take themselves too seriously ultimately get taken less seriously by others.

As Glenn Frey sang in “Take It Easy”: Don’t let the sound of your own wheels make you crazy.

2. You Only Want the Ones You Can’t Get

All driven, A-type people, listen up.

These lines from “Desperado” so encapsulate the struggle so many leaders feel, especially when some measure of success comes your way:

“Now it seems to me, some fine things
Have been laid upon your table
But you only want the ones that you can’t get.”

What is it that drives us to want less of what we have and more of what we don’t?

There’s a discontent that drives every successful leader that can ultimately prove destructive.

Don’t let the discontent that drives you destroy you.

3. We Never Even Know We Have the Key

Every leader faces lids. You do. I do.

Is there a solution?

Well, yes. As the Eagles put it:

“So often times it happens that we live our lives in chains
And we never even know we have the key.”

This makes me ask the question: Do I actually hold the key to an area in which I’m stuck and don’t realize it?

This can happen spiritually (God is willing to do more than you’ve realized), and it can happen in day-to-day leadership.

I outline three ways to break through leadership lids here.

You may be holding a key you don’t even realize. (The lyric is from “Already Gone.”)

4. You See It Your Way. I See It Mine. But We Both See It Slipping Away.

They happen happen all the time.

“Best of My Love” is a song about relationships, but I’ve seen this happen way too often in leadership.

Competing agendas create a stalemate, and neither side wants to engage to the point of breakthrough.

As a result, the mission suffers or even collapses.

“You see it your way
And I see it mine
But we both see it slippin’ away.”

You’ve taken your position on an issue.

Neither of us is motivated to get past where we stand.

It’s a recipe for collapse.

Here’s what every leader needs to remember: Never let your position jeopardize the mission.

5. If It All Fell to Pieces Tomorrow…

A quote from “Take It To the Limit”:

“If it all fell to pieces tomorrow
Would you still be mine?”

Leadership and success are intoxicating. This lyric drives at the heart of what matters most.

It’s too easy to sacrifice relationship and even faith amidst the relentless drive of leadership.

If your job disappeared tomorrow, what would be left of:

Your personal sense of worth?

Relationships matter more than anything (with God, with each other), but it’s so easy to forget that.

Ask yourself: If you weren’t in ministry tomorrow, what would be left of your faith, your family, yourself?

6. Half the Distance Takes You Twice as Long…After the Thrill Is Gone

Too many leaders lose passion.

The cynicism mounts. The hurts pile up.

As a result, too many leaders fade out or burn out before they’re done.

This lyric from “After the Thrill Is Gone” says it so well:

“Time passes and you must move on,
Half the distance takes you twice as long
So you keep on singing for the sake of the song
After the thrill is gone.”

It’s hard to admit out loud that the thrill is gone.

Pride pushes you to think you can handle anything.

Fear keeps you from telling anyone you can’t.

I went through a season of burnout where the thrill was gone, but came back. Here are 7 truths about burnout and leadership.

7. They’ll Never Forget You ’Til Somebody New Comes Along

If there’s one thing social media and 24/7 connection has done it’s this: It’s driven our insecurities sky high.

You actually have a shot a being better known than at any time in history, thanks to our friend the Internet.

And sometimes the minor celebrity that comes along with leadership today goes to a leader’s head.

“New Kid in Town” contains an amazing reminder of how temporary our place is:

“They will never forget you ’til somebody new comes along.”

That is so so true.

Influence is always given by God for a higher purpose (to serve Him and help others, not to serve you).

A final observation about leadership and significance: Often the people who aren’t seeking to be remembered are the ones we remember.

8. You Know I Don’t Understand Why You Don’t Treat Yourself Better

By now, you can see dealing with success and fame was a huge issue for the Eagles. Sometimes they handled it well, sometimes it was a huge struggle.

The ability to handle all the fortune and fame was a major contributing factor to the band’s breaking up.

In The Long Run—their last studio album before their breakup—Don Henley sang:

So…leader…why don’t you treat yourself better?

Often the motive that drives us in leadership needs sifting (even in the church).

Josh Gagnon, pastor of the rapidly growing Next Level Church, and I have an honest conversation about our own insecurities, the emptiness of success and how to take care of yourself as a leader in this episode of my Leadership Podcast. You can listen on iTunes or here.

Leaders who pay attention to the inner journey make it in the long run.

9. One Day He Crossed Some Line

Technically, “New York Minute” is a Don Henley song but the band has performed it together since reuniting in 1994.

Henley captures the story of a man who was gaining the world but lost his soul. As he put it:

“But men get lost sometimes
As years unfurl;
One day he crossed some line
And he was too much in this world
But I guess it doesn’t matter anymore.”

How do you avoid crossing a line?

Whether that’s a moral or ethical line, a relational line or a decisional line from which there’s no return?

You develop an inner circle of people who will tell you the truth.

I outlined how I put mine together in this post.

10. We Are All Just Prisoners Here, of Our Own Device

When you start out in leadership, you think all the obstacles you’ll face are external:

Your title or position

Your boss or team

Constraints imposed by your organization or denomination

But eventually you realize the biggest obstacles you face are not around you; they’re within you.

As the Eagles sang in “Hotel California,” we are all just prisoners here, of our own device.

For me, nothing challenges me more than my need to break through the personal barriers I find within myself: spiritual, emotional, relational and mental.

I believe this is an intensely spiritual pursuit.

Few analyzed their inner barriers as openly and transparently than Henri Nouwen did in The Genesee Diary—his inner journey from seven months in a Trappist monastery in upstate New York. One of my all time favorite books.

Worth a read if you care about your soul.

Got any Eagle’s lyrics that have helped you think through life and leadership differently?