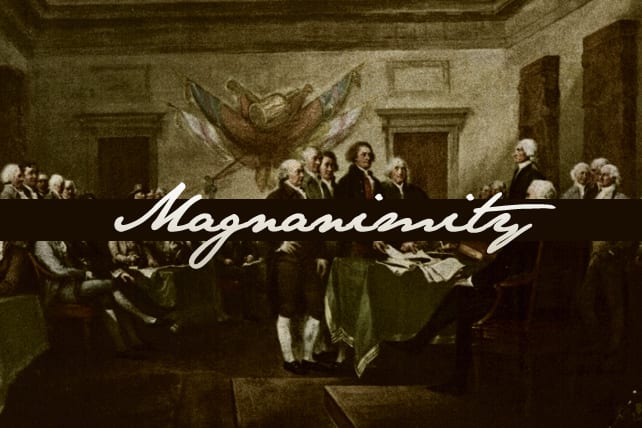 In case you hadn’t heard, Mike Pence went to see Hamilton last week, and it turns out that the people who star in Hamilton and buy tickets for Hamilton are not a natural constituency for Donald Trump. What this says about Broadway and Main Street, or Red States and Blue States, I’ll leave for others to dissect. And whether lecturing the Vice President-Elect was an act of courageous resistance or blinkered rudeness is not what this post is about.

Instead, I want to talk about an old fashioned word: magnanimity.

What is magnanimity? Merriam-Webster defines it as “loftiness of spirit enabling one to bear trouble calmly, to disdain meanness and pettiness, and to display a noble generosity.”

In other words, see Mike Pence’s response to Hamilton-gate (and not so much Donald Trump’s tweets). I understand there is a time to fight, a time to stand your ground, a time to give as good as you get. But this was not one of those times. We must not confuse personal pique with national security. In fact, for most of us, most of the time, we would do well to take Pence’s approach: minimize our own offendedness and praise what we can, even in those who oppose us.

In September 1775, and in again in September 1787, the founding father John Witherspoon preached a sermon to the senior class at Princeton titled “Christian Magnanimity.” He listed five principles of magnanimity:

1. To attempt great and difficult things.
2. To aspire after great and valuable possessions.
3. To encounter dangers with resolution.
4. To struggle against difficulties with perseverance.
5. To bear sufferings with fortitude and patience.

This last point shapes the way we use the word today. The magnanimous person does not bear petty grudges, does not wallow in self-pity, does not demand penance, does not advertise his suffering and does not stoop to settle every score. In an age where everyone is scrambling to be more aggrieved than everyone else, where we think nothing of retweeting praise and retweeting insults (to prove our aggrieved status), where apologies are routinely demanded and offendedness is next to godliness, surely we have much to learn about magnanimity.

It’s not only the right thing to do. It’s the smart thing to do. While we certainly want to stand up to real physical violence and insist on all the rights accorded us by God and by the laws of the land, when it comes to insults, rudeness and social media scrappiness, killing them with kindness is usually the way to go. Whatever you think of the commentary from the cast of Hamilton, the post-play lecturing is apt to look brave when the President-elect demands an apology, and rudely self-important when the Vice President-elect says the show was terrific. We would do well to be more like David pardoning Shimei than the sons of Zeruiah looking for the next enemy to execute. Magnanimity is often its own reward.

Pastors, parents, politicians, pundits, Internet pugilists—where can we show the sort of Christian magnanimity our world needs but rarely displays? For bearing burdens, eschewing meanness and setting an example of noble generosity is not simply the way to win friends and influence people. It is the way of the cross. And the way of the One who hung there saying, “Father forgive them, for they know not what they do.”