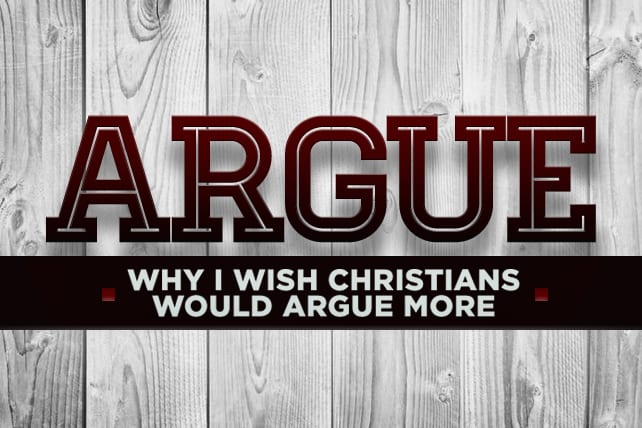 I wish Christians would argue more.

No, I’m not being sarcastic or saying this with an eye roll. I mean it.

Arguing in the Classic Sense

To be clear, I’m not using the word “argue” in the sense that the apostle Paul did, when he instructed the Philippian church to “do everything without grumbling and arguing” (Phil 2:15). I don’t say “argue” in the sense of being quarrelsome or irritable or “loving the fight” of aggressive words.

I use the word “argue” in its classic sense: the ability to make or counter an argument that depends on logic and reason. To meet one argument with another. To argue with someone, civilly and respectfully, toward the discovery of truth.

In his autobiography, G.K. Chesterton remarked that the bad thing about a quarrel is that it spoils a good argument! He hated when bad feelings overshadowed the making and countering of good arguments.

The ability to argue well is the hallmark of a civil society, and it should be the goal of thoughtful Christians. Chesterton provided a model of this in his frequent debates with George Bernard Shaw, a lifelong friend who saw the world almost completely differently than he did. The two of them argued, but they did not fight.

C.S. Lewis did the same. Michael Ward says Lewis “relished disagreement and debate.” He mentions one student, Derek Brewer, who remembered how Lewis would sometimes say, “I couldn’t disagree more!” But Lewis never “indicated he was offended or that Brewer was somehow unjustified in holding an opinion Lewis considered mistaken. Though they often differed, this led to a ‘fruitful dichotomy of attitudes,’ not to a chilling of their pedagogical relationship.”

“He could always distinguish the man from the man’s opinion, and he knew the difference between an argument and a quarrel. He would not allow himself to be betrayed into aggression.”

In This Is Our Time, I write that I’d love to see more arguing online, if by that we mean rational, reasonable intentions of persuading people to another point of view. Instead, we see quarreling online, where people are personally offended that someone else has a different opinion, so they dig in in order to defend the point of view they already accept.

Why does this happen? For three reasons.

1. The Rise of Emotivism

First, fewer people believe it is even possible to arrive at a conclusion in a moral debate. This has led to the rise of emotivism, which Alasdair MacIntyre defines as “the doctrine that all evaluative judgments and more specifically all moral judgments are nothing but expressions of preference, expressions of attitude or feeling, insofar as they are moral or evaluative in character.”

2. The Rise of Worst Assumptions

In the emotivist environment, people assume the worst of their opponents. They no longer attempt to appeal to unassailable criteria or compelling reasons to make the case for one policy over another, which leads to deep suspicion that something other than reason itself is motivating their activism.

Do you see what has happened here? We assume that a nefarious motivation or irrational prejudice must be guiding one’s opponent, since there is no longer any way to base a particular point of view on a commonly accepted moral axis.

3. The Rise of Technological Reaffirmation

Finally, in a hyper-connected age, we are constantly reaffirmed in our “rightness.” The accessibility of endless information on our phones makes us think we have the knowledge we need most and that we are right.

This is why, if you check the Facebook comments and the Twitter followings of people and the comments section of online blogs and articles, you’ll stumble across people who seem, shall we say, less than pleasant. It’s because they’ve been in a years-long process of heart-formation by which (1) they’re convinced that they have all the knowledge they need—if not in their head, it’s right there on their phone, and (2) that they are right and their cause is righteous.

Put these two developments together (the idea that we cannot arrive at moral truth, and the rise of technology that reaffirms our own righteousness), and you can see why many conversations devolve quickly from argumentation to quarreling.

Civility as a Christian Gift

One of the ways that Christians can be faithful in this time, to stand out and “shine like stars in a crooked and depraved generation,” is by relearning the civility required for good argumentation, and then offering civil, rational discourse to our society. Os Guinness roots this calling in the gospel:

“Followers of Jesus are called to be peacemakers, with truth and grace; Paul asks us to speak the truth with love. We’re called to love our enemies and do good to those who wrong us. This is our Christian motivation for championing the classical virtue of civility.”

So let’s hope for more arguing and less fighting!