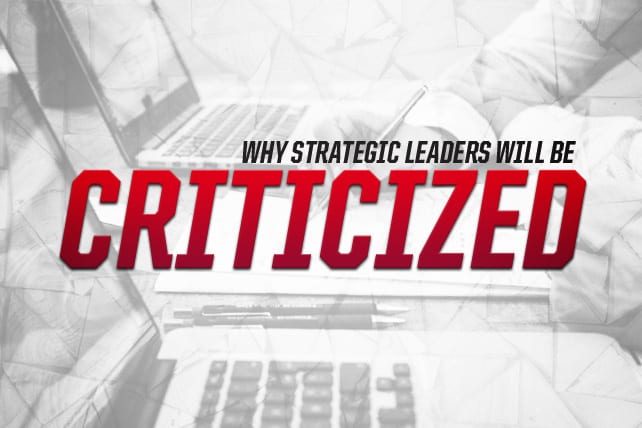 If you’re a church leader who thinks strategically, you’re probably going to get criticized. Maybe even more than you ever dreamed.

For some reason, being strategic is often viewed as being unspiritual in the church. Why?

I mean, if you want the church to flounder, be unstrategic. Never use your mind, only use your heart. Never think, only feel.

Saying the church should never be strategic is like saying God wasn’t strategic when he designed the universe or even when he designed you. Everything was just random or emotional; God never invoked what we best understand as rational thought.

The truth is God showed incredible precision and unfathomable accuracy and detail when creating the galaxies.

If God created us to think, why do people criticize leaders who use their minds when leading?

It’s a real question. Talk to many Christians, and you’d think logic and strategy are the enemies of the faith. (Just read the comments scattered throughout the blog…you’ll see the mindset there.)

You know who pays the price for this? Among others, the church. Because so often, churches are poorly led as a result.

To be fair, we’ve all probably met a few church leaders who were strategic but who showed little evidence of a profound and personal relationship with Jesus. That’s just wrong, and that’s not what this post is justifying.

You can be strategic and deeply devoted to Jesus. You can think and be faithful.

However, if you’re a strategic leader, get ready.

As soon as the conversation gets specific and detailed, some people start criticizing. Here’s what you need to be prepared to hear.

But too often, they do, and the church pays a horrible price.

So…because I’m planning and thinking, I must not be trusting God?

It doesn’t mean “let’s just do some ill-considered thing and hope it works out.”

Trust and strategy can be and should be inherently linked.

When they work together (like when Paul built the early church), incredible things can happen.

Will God do more than your strategy suggests he will? Absolutely.

When I look at everything God has done in my life and leadership, he’s out-delivered my strategy a thousand times over. I’ve seen God work in me, through me and in spite of me again and again.

But I often find that leaders who have a (faithful, well-thought-out) strategy tend to do greater things in the Kingdom than leaders who don’t.

2. Just Get Back to the Gospel

Often when the conversation becomes highly strategic, someone around the table will say something like, “Just get back to the Gospel.”

Should you get back to the Gospel?

Of course. In fact, root everything you do deeply in the Gospel and be faithful to it.

Strategy—when done well—is what gives flesh to the Gospel in your context.

I get that…but what are the critics really railing against?

I don’t think most can answer that.

And notice this: Often the critics who speak the loudest are accomplishing little for the Gospel in their lives.

They’re not leading anyone. They may leave critical comments on a blog or write angry emails to church leaders, but who’s following them? (Other than maybe five people who write letters/leave comments with them?)

Who are they leading to Christ?

What are they building?

What seeds are they sowing other than seeds of dissension?

These are so hard.

When I was a young leader, I tried to justify all my actions with scripture.

But you know what? Often that’s exactly what people try to do when they keep quoting scripture verses: justify their actions.

And when you try to explain your position using a series of scripture verses, guess what someone who disagrees with you will do? The same thing.

And you end up with a scripture war.

I’m not sure that’s why God gave us the scriptures.

Again, every strategy you propose or adopt should be entirely consistent with Scripture and genuinely biblical, but too often Christians will try to use scriptural principles to attack preferences with which they disagree.

Often, strategy comes down to preference.

One person likes this kind of music; another prefers a different style.

Someone likes a more traditional architecture; someone else prefers something far more modern.

One group likes a church with programs running five nights a week; another prefers a simpler model.

Sadly, too many strategic conversations go down in the flames of Scripture wars.

And when we do that, don’t we play right into the enemy’s hands? As shocking as it sounds, the scripture sometimes gets used as a weapon against God. (Satan tried this with Jesus.)

All we do as Christian leaders should be deeply biblical and scripturally sound.

It isn’t wise or helpful to use the Bible to beat each other up or shut down needed discussions.

4. The Church Is Not a Business, You Know

You’re not a CEO, you know. And the church is not a business.

I’ve heard this many times.

Critics who say this are quite right—and very wrong.

The sentiment underneath this criticism suggests the church has nothing to learn from the business world.

Again, without getting into the scripture wars outlined above, you don’t have to read the scriptures very deeply before you encounter organizational leadership in the life of Moses (who couldn’t handle millions of people by himself), or David’s skillful building of a nation, or Jesus’ organization of his followers into a group of 70, 12, three and one, or the early church’s reorganization after explosive initial growth.

Anyone who cares about people has to care about organizing people, reaching people and caring for people.

Sadly, the business world has become better at it in many cases than the church. Companies use advanced strategies to make something as shallow and fleeting as profit.

What if the church used that level of strategic thinking to reach people and make disciples?

Think about strategy when it comes to tackling one of the biggest obstacles facing churches today: breaking the 200 attendance mark. (I wrote about why 80 percent of churches never break that barrier here.)

Most churches fail to break the 200 attendance barrier, but it has nothing to do with their…

Desire. Most leaders I know want their church to reach more people.

A lack of prayer. Many small church leaders are incredibly faithful in prayer.

Love. Some of the people in smaller churches love people as authentically as anyone I know.

Facility. Growth can start in the most unlikely places.

You know why most churches don’t push past the 200 mark in attendance?

They organize, behave, lead and manage like a small organization.

In a corner store, Mom and Pop run everything. Want to talk to the CEO? She’s stocking shelves. Want to see the director of marketing? He’s at the cash register.

Mom and Pop do everything, and they organize their business to stay small. Which is fine if you’re Mom and Pop and don’t want to grow.

But you can’t run a supermarket that way. You organize differently. You govern differently. There is a produce manager and there are people who only stock shelves. There’s a floor manager, shift manager, general manager and so much more.

That’s just one tiny example of how better thinking (things we can learn from the wider world) can transform the church’s mission today.

5. Just Pray About It

We should absolutely pray about all of the decisions we make, organizationally and personally. I am full on for prayer.

But often in the context of a meeting, ‘just pray about it’ becomes the ultimate shut-down move.

“Just pray about it” translates to “let’s not make a decision.”

Or it means “let’s defer that…forever.”

Or, even worse, ‘just pray about it’ suggests that if you actually prayed about it, you would realize like all the spiritual people do that God would not approve.

Really? Just because something sounds spiritual doesn’t mean it’s from God. In fact, sometimes that’s the best way to shut down the mission of the church: make it sound spiritual, and then kill all forward momentum.

Should you pray about your decision? Absolutely.

But when you pray, remember that prayer and thought are not mutually incompatible.

In fact, they should go hand in hand. The best prayers bring your heart and your mind before God. They bring all of you and everything you’re dealing with before Christ.

So…by all means, pray about it. Pray about it deeply. Bring all of your plans before God.

Don’t let people who say ‘just pray about it’ kill the mission of the very church God created.

Do You Think Strategically? Join Us for Rethink Leadership 2017!

If you do like to think strategically (like I do) join me at Rethink Leadership in April. We’ll be working through key church leadership issues like strategy, momentum, culture, team and personal leadership.

Again, if you’re not a senior church leader, register instead for the Orange Conference in Atlanta. I’ll be at both events, and I’d love for you to join me.

You can still save on regular rates by registering now!

What Have You Heard?

I realize this post probably pushes the buttons of a lot of people in the church. I get that.

I’m just trying to move the needle on the church’s mission by pushing past some of the arguments that—as noble as they sound—aren’t actually helping anyone.

What are some objections to strategic thinking that you’ve heard?