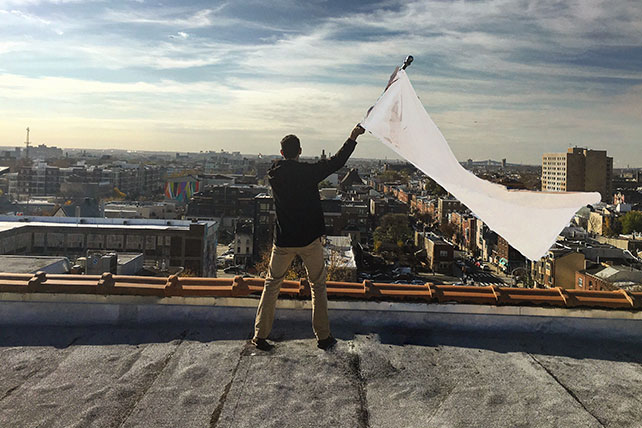 Surrendered to the Holy Spirit

Preachers are pretty good at asking rhetorical questions—questions that aren’t meant to be answered directly, but rather internalized for the purpose of making a point. Rhetorical questions have been used for thousands of years by people of various professions to drive home a thought or concept in an audience.

Think of this question in the context of a preacher’s sermon, at the end when he’s concluding: “Who is the Holy Spirit to you?” There might be soft music playing, an attitude of reverence and quiet reflection in the air. Some people are probably checking their watches to see what time they’ll get out. Others are praying, internalizing the question, asking the Holy Spirit to be real in their lives, and so on.

Now, consider the question under different circumstances, when it was asked a bit more pointedly, and with the expectation of an answer. Walter Lewis Wilson was a doctor in the beginning of the 20th century who was agonizing over his fruitless efforts at witnessing for Christ. One day in 1913, a French missionary was visiting in his home and asked the question posed above to him: “Who is the Holy Spirit to you?” Wilson gathered that it probably wasn’t a rhetorical question, judging by the way the missionary expected an answer. So he replied, “He’s one of the Persons of the Godhead…the teacher, guide and third person of the Trinity.” A textbook answer.

But his answer wasn’t what the missionary was looking for. “No, you haven’t answered my question,” this missionary responded. “Who is the Holy Spirit to you?” Wilson responded the only way he knew how: with honesty. “He is nothing to me. I have no contact with Him and could get along quite well without Him.”

At the beginning of the next year, on January 14, 1914, Wilson attended a message given by James M. Gray, a pastor and the future president of Moody Bible Institute. He was preaching from Romans 12:1. Gray stated, “Have you noticed that this verse does not tell us to whom we should give our bodies? It is not the Lord Jesus; He has His own body. It is not the Father; He remains on His throne. Another has come to earth without a body. God gives you the indescribable honor of presenting your bodies to the Holy Spirit, to be His dwelling place on earth.”

Wilson returned to his house and lay prostrate on the carpet. There in the late hours of night, he said, “My Lord, I have treated You like a servant. When I wanted You I called for You. Now I give You this body from my head to my feet. I give you my hands, my limbs, my eyes and lips, my brain. You may send this body to Africa, or lay it on a bed with cancer. It is Your body from this moment on.”

A Life Changed by God’s Spirit

Two ladies came to Wilson’s office the next morning selling their advertising services. He promptly led both of the ladies to Christ, an event that served as the beginning of an extraordinary life of evangelistic fruitfulness. He later founded Central Bible Church in Kansas City, Flagstaff Indian Mission and Calvary Bible College, along with writing a best-selling book. He wrote in his journal, “When I surrendered my life to the leading of the Holy Spirit on January 14, 1914, it was much greater than the change that took place when I was saved on December 21, 1896.”44 Think of the implications of this story for a moment and then consider the following:

It is essential to walk in the Spirit to produce God’s fruit. But don’t take my word for it. Present your own body to the Spirit to use as he will, and see what happens.

The above is an excerpt from Bearing Fruit: What Happens When God’s People Grow. You can learn more about the book on our website. You can also download a FREE copy of Chapter 1.