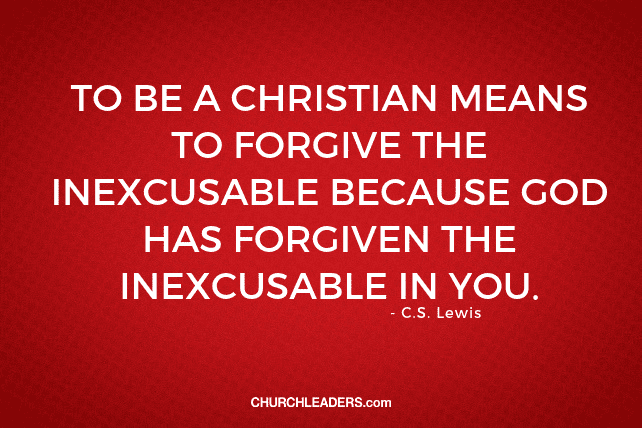 Forgiveness in leadership is absolutely critical to leading people.

“You hate me! You pick and choose which members you love!” Years ago, those words were screamed in my ear over the phone by a church member who felt like I had not greeted them well on Sunday morning. In fact, they went on to tell me in the conversation that I only gave them one hug instead of two on that day and then they hung up on me. Maybe the moral of the story is always give your members two hugs on Sunday.

These seven principles have helped me along the way when it comes to forgiveness in leadership.

1. Forgiveness in leadership requires so much energy that you can help yourself by having a soft heart and thick skin.

If you constantly take everything personally you won’t have any energy left to forgive in the situations that really hurt. Learn to let some stuff roll off your back. Focus on the people and issues that really need forgiveness.

2. Forgiveness in leadership is easier when you don’t define the person by what they have done to you.

The person that is hurting you is most likely a decent Christian who is caught up in the middle of a volatile situation. Don’t judge their whole life on what they are doing now to you. Take the kind of perspective on their life that you would want them to take on yours.

3. Forgiveness in leadership is a standard by which you can measure your Christian spiritual growth.

How often do you say I’m sorry? It shows humility toward God and love for others when we are quick to apologize. When we wait to say I’m sorry or we don’t grant forgiveness quickly we are living from a source of pride.

4. Forgiveness in leadership has a powerful way of taking the steam out of an argument.

How many conflicts become inflated because people won’t apologize? I’ve found that those people who are coming to the office for a big battle are disarmed by a prompt and sincere apology.

5. Forgiveness in leadership very rarely needs to be accompanied with an unsolicited explanation.

This is tough because we always want to make an excuse or give a rationale for our behavior. Just practice the discipline of asking for forgiveness and stopping. To be sure, sometimes the explanation is required but most often it’s not. Practicing this will help you even when you are the one who has been hurt. Because in ministry sometimes you can’t give the other party all the information you know.

6. Forgiveness in leadership is the natural overflow of a life saturated in the gospel.

This is more than a catchy statement, it’s true. Walk your thoughts through the components of the gospel concerning the situation. Remember God’s original intention was for us to live in constant dependence on him. Remember that the problem you are having is because both of you are sinners. Remember that Christ came to redeem the worst of us. Remember that we can be restored.

7. Forgiveness in leadership does not mean forgetting, it means releasing.

It’s not profitable to try and force yourself to not remember being hurt. What you can do is choose not to hold the offense against the person. This is not easy but it is the most Christ-like thing you can do in life and ministry.