Jennifer Garner on Why Church Is So Important to Her Family

Mourners Lined Up to Honor Late Televangelist Frederick K.C. Price at His FaithDome

Jesus’s words to the believers in Smyrna encouraged them in the face of coming persecution. “Be faithful, even to the point of death, and I will give you life as your victor’s crown” (Rev. 2:10 NIV). Indeed, not just in Smyrna but across the entire region, first-century believers who resisted the pressure of imperial cult worship endured persecution. Some scholars think this persecution was often economic, like the loss of a job or financial wealth (Fairchild, p. 146). Probably for this reason, Jesus reminded them they are spiritually rich even though materially poor. The ancient marketplace of Smyrna still features beautiful arches and running water, which had been collected into cisterns for city use in ancient times. Photo by Karrie Sparrow.

The early church father Polycarp was the bishop of Smyrna and a disciple of the apostle John. At the age of 86, he was burned at the stake for refusing to renounce his faith in Christ. Some of Polycarp’s last words were, “For 86 years I have been his servant, and he has done me no wrong. How can I blaspheme my King who saved me?” (Wilson, p. 311). 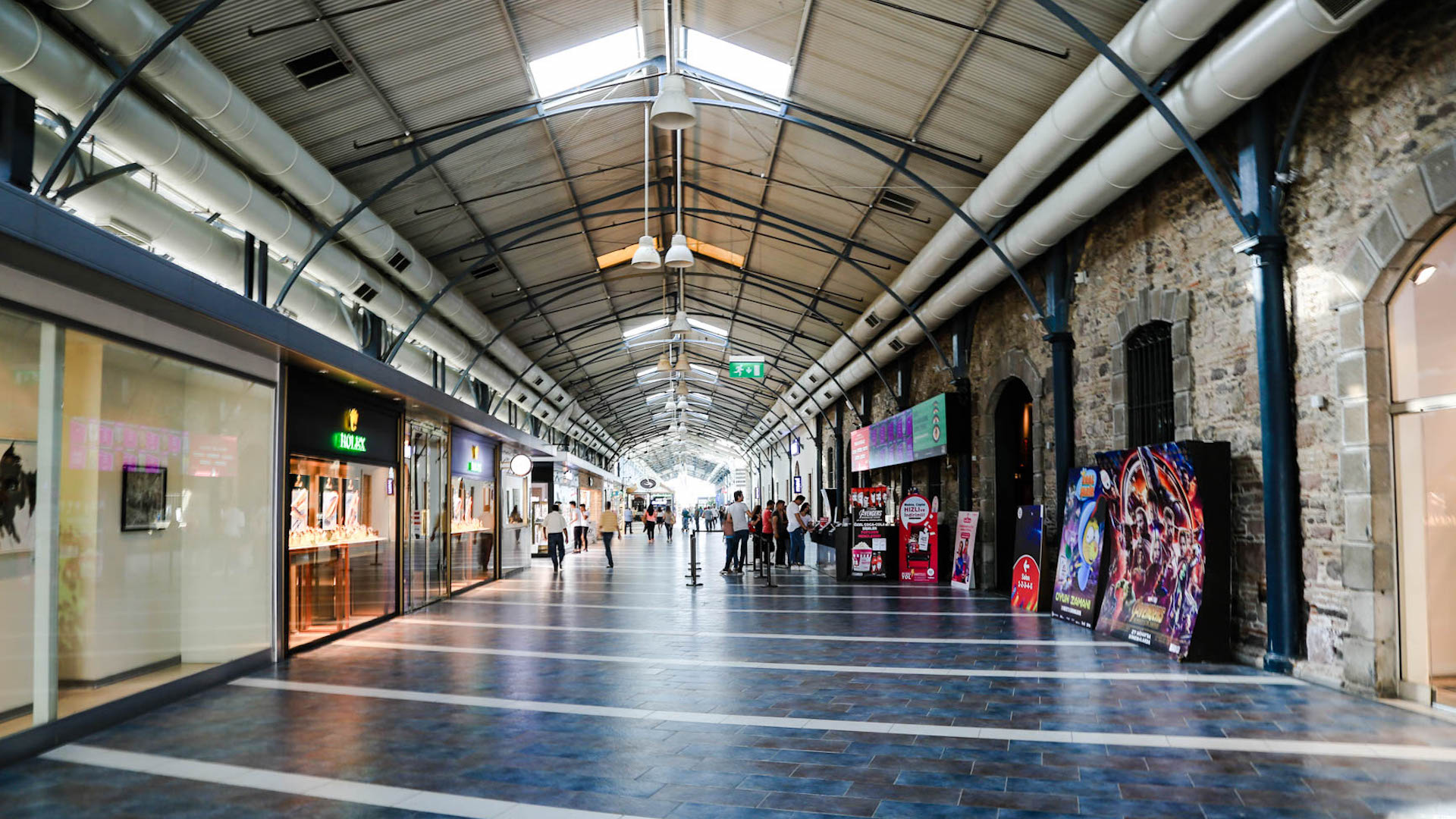 The modernity of Izmir’s shopping promenades stands in stark contrast to the arrangement of ancient Smyrna’s marketplaces. Photo by Karrie Sparrow.

The modern city of Izmir is filled with secular modernists—officially Muslim by name but sincerely disillusioned with Islam and the current political climate. They may know that Christians “used to” live in Izmir, but most are unaware of the thriving Christian community of up to 500 believers scattered among at least 12 churches. Although many of these churches are historically Catholic or Orthodox, there is a growing number of evangelical Protestant believers as well. The ruins of Pergamum sit atop a hill overlooking the modern-day city of Bergama. A state-of-the-art cable car carried us to the top of the hill where we viewed extensively excavated ruins. Pergamum was a principal city of the Roman empire in the first century. The most striking remnant is the steep theatre built into the side of the hill. The acropolis and an ancient amphitheater that seats 10,000 people overlook the city of Pergamum, now modern-day Bergama, Turkey. Photo by Karrie Sparrow.

But it was the ruins of the temple to Zeus that sobered me. Some think this temple is why Jesus called Pergamum the place where Satan has his throne. Jesus had some serious warnings toward Christians in Pergamum who had fallen away from his teaching to embrace sinful behaviors. If they did not repent, Jesus himself would come and fight against them. Jesus did, however, commend the few in Pergamum who stood strong and didn’t renounce their faith even when their friend Antipas was killed (Rev. 2:13). 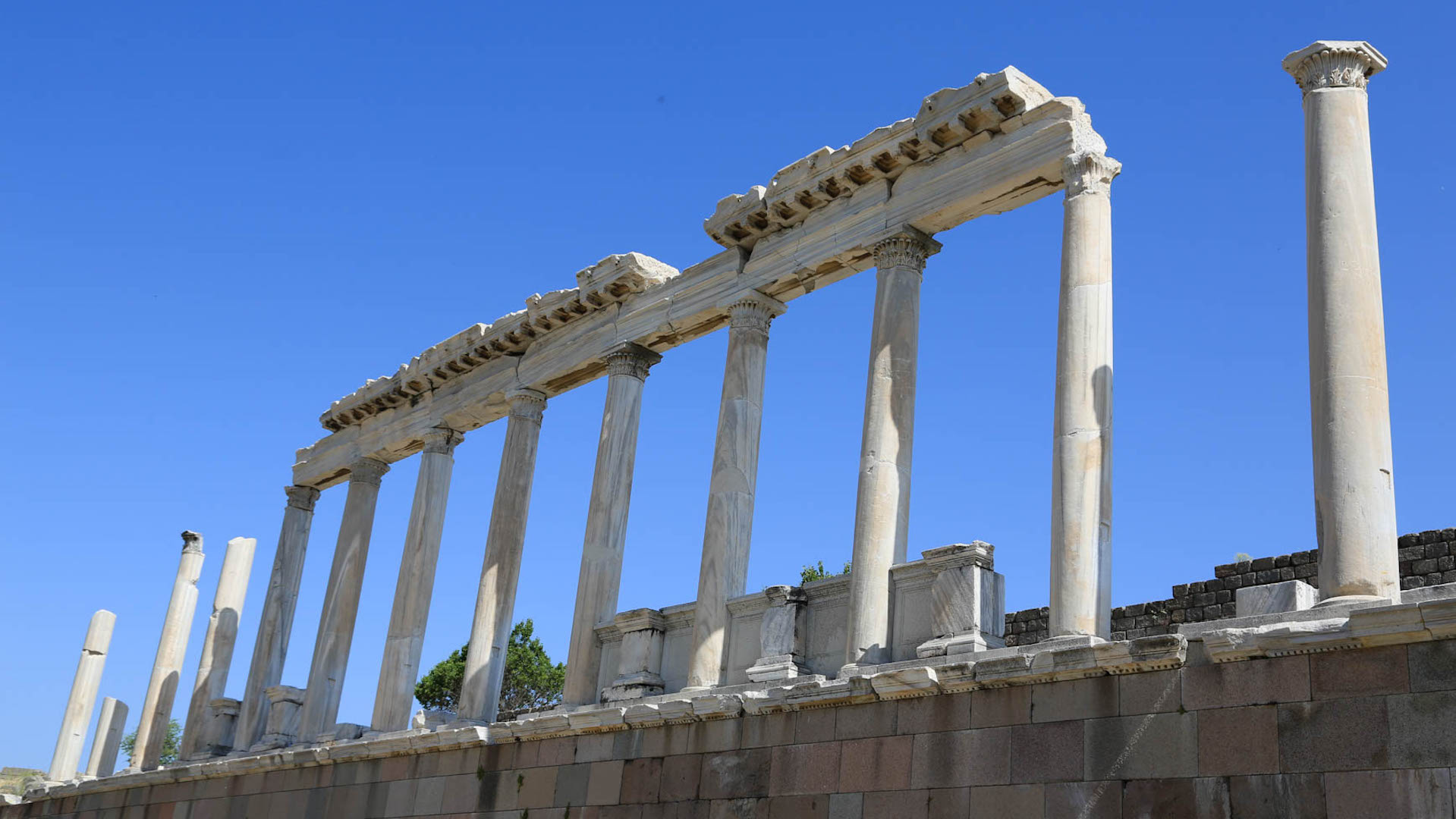 The temple of the Roman emperor Trajan was used for the worship of Zeus on the upper acropolis of Pergamum, Turkey. Photo by Karrie Sparrow.

Today, Bergama is made up of an “old city” of narrow, cobbled streets and a more modern city. The locals I interacted with didn’t disappoint as they extended their famous Turkish hospitality. Happy to offer information, one man told me Christians visit the seven churches like Muslims visit Mecca—to earn merit before God. My heart dropped to hear his misunderstanding of Christianity. Today, there are a few known believers around Bergama, but no churches. The way to the Asclepion of Pergamum, perhaps the ancient world’s most famous medical center. Photo by Karrie Sparrow.

In the book of Acts, Lydia was a wealthy benefactress and convert to Christianity. A seller of purple cloth, Lydia’s original home was the city of Thyatira. The ancient coins of Thyatira show a multitude of guilds including linen weavers, bronze workers, potters and bakers. Thyatira was the only city of the Seven Churches built on flat ground without natural defenses, making it vulnerable to attack. In John’s vision, Jesus is described with feet like burnished bronze—a metaphor Thyatira citizens would have easily grasped because of its bronze workers. Jesus warned those in Thyatira who were tolerating the deceptive teaching of “Jezebel,” an unrepentant influencer or perhaps a symbol for the licentiousness that led people into Satan’s “deep secrets” (Rev. 2:20, 24 NIV). Few in Thyatira had remained true to the faith, and Jesus encouraged them to “hold on” (Rev. 2:25 NIV). He promised authority over nations to those who persevere until the end. The scant ruins of Thyatira are unearthed in the modern city of Akhisar. Contemporary apartment buildings line streets teeming with busses and cars. There is no church in Akhisar and no known believers. Today, more than one hundred thousand people live in Akhisar. The city is well known for its olive and textile industries. Photo by Karrie Sparrow.

When Preaching Hurts More Than It Helps

Church in Canada Fined $83K for Meeting for In-Person Worship

6 Reasons Why Physical Fitness Is Important for Pastors

Is God Proud of You?

The Goal of Spiritual Practices