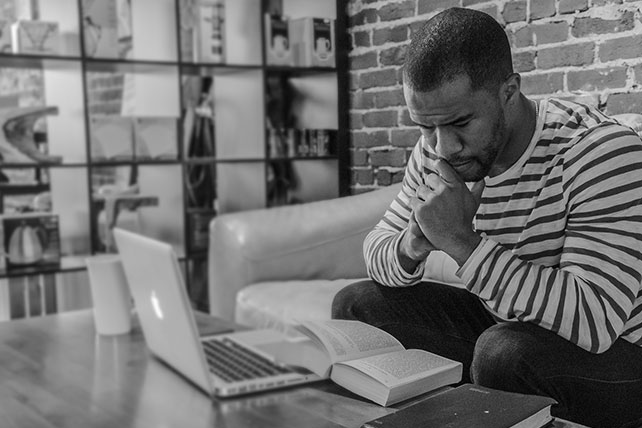 I remember a time when online dating was new; and people who met their spouse through a website would sheepishly explain how they first made the connection. Voices would lower, eyes would go to the floor, and bashfully they’d say, “we met online.” As if the medium itself made the now-blossoming relationship somehow less valid or somewhat less blessed. Nowadays, however, I no longer detect such embarrassment. The online platform has become part and parcel to our way of life—an element of the everyday providence the Lord sees fit to use in the routineness of our lives. “Online” is how business is conducted, the way people stay in touch (or meet for the first time), and perhaps most relevantly at our present juncture in history: how education happens. More and more schools this academic year will utilize a digital platform for education—and there is no sign of this trajectory being walked back anytime soon, even concerning theological education.

Online learning is here to stay.

But just as the stigma of online dating is dissipating, so too some of the controversy surrounding digital education is becoming a thing of the past. However, we should at least consider the theological legitimacy and underpinnings of conducting school via distance. As a seminary professor, this post primarily focuses upon theological education, but what biblically applies to a Divinity degree should certainly have application to other forms and subjects of instruction.

Apostolic Instruction and Authority from a Distance

Let us first consider the way in which the Apostles saw their authority and instruction from a distance. In the first century, the notion of instantaneous communication through fiberoptic wires which span the globe was nowhere in the Apostles’ minds. Instead, their means of “Distance Education” was handwritten letters, delivered via courier, through all kinds of weather, over various terrain, and hundreds of miles, to reach their intended recipients. From such a remote position, Jesus’ followers conveyed their understanding that they were instructing the church with Christ’s authority from a distance. They said via letters, things like:

“For I received from the Lord what I also delivered to you” (1 Cor. 11:23), and then Paul goes on to provide instruction for instituting the Lord’s Supper as properly conducted.

“I became a minister according to the stewardship from God that was given to me for you, to make the word of God fully known” (Col. 1:25), even as Paul is revealing such mysteries in an epistle.

“Confident of your obedience, I write to you, knowing you will do even more than I say” (Philemon 1:21), as the Apostle saw himself not only instructing via distance, but ensuring an effective response in the process.

We would very much call this concept: distance learning for theological education. The Apostles had this format going for the church thousands of years before the Reformed Presbyterian Theological Seminary ever considered it!

They go on to more strongly convey the importance and authority of such instruction:

“For though absent in body, I am present in spirit; and as if present, I have already pronounced judgment on the one who did such a thing” (1 Cor. 5:3). While this context is certainly formal church discipline, the distant, though authoritative presence of Christ’s Apostle must be appreciated here.

“Let such a person understand that what we say by letter when absent, we do when present” (2 Cor. 10:11), clearly communicates the connectedness between the Apostle at a distance and the Apostle face-to-face.

Is there not sufficient evidence in the Scriptures that the Apostles saw the legitimacy of theological instruction from a distance? And is it not clear that they believed their apostolic authority was communicated even through epistolary form? It is not very hard for us to make the leap from first century letters, then, to twenty-first century digital means of communication. If the early church conducted itself through distance education, certainly such a medium has its place in today’s educational landscape as well.

The Primacy of Embodied Local Instruction

And yet, let us not too hastily close this chapter on distance theological education, for the Apostles also had a very balanced perspective of the importance of embodied instruction and the primacy of locality.

“I mention you always in my prayers, asking that somehow by God’s will I may now at last succeed in coming to you” (Romans 1:10), that though Paul wrote, taught, and instructed the Roman church from a distance, his desire was still bodily presence with them.

Seeing the limitations of distance instruction, Paul elsewhere wrote, “I wish I could be present with you now and change my tone, for I am perplexed about you” (Gal. 4:20). There are times when absence falls far short of local presence.

And perhaps most poignantly: “Though I have much to write to you, I would rather not use paper and ink. Instead I hope to come to you and talk face to face, so that our joy may be complete” (2 John 1:12). The Apostle John obviously sees a connection of fullness of joy and being physically together in the same place.

While distance theological education is of value, is important, has its place within the church (as it has for millennia), and allows for authoritative Christ-ordained instruction to occur, there is still a priority placed upon being with the people of God in the flesh. God has fashioned us as embodied souls, and though there are providential blessings of adequately communicating from afar, it is at times (should I say, “most times”?) far superior to learn together in the same physical space.

Just as God can, has, and does instruct us via distance education (i.e. the Scriptures), we long for the day when he will instruct us “as face-to-face” (Exodus 33:11, 1 Cor. 13:12, Matt 5:8). Until then, let us use every legitimate means available to us in sufficiently raising up the next generation of his church!