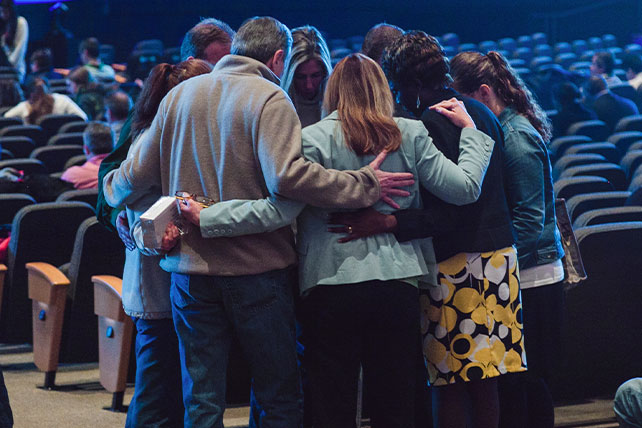 “We just want people to think of the church as their family.”

In our church’s membership process, one topic I always cover is the idea of formal membership. Some Christians instinctively resent any whiff of formality in the membership process. Having a class, interview, and official vote on their membership makes them feel like we’re suspicious of their commitment to the church or that our church is more about filling out the proper forms than it is about family.

Every church has a sense of membership. Every church has some kind of idea of who is a part of that congregation and who is not. But in some churches the distinction between the church and the world is blurry, while in others that distinction is more clearly defined. The life of the church may feel more natural and organic in church without formal membership—but it’s the organic relationships of a commune, not a family. Communes are just people who happen to live near one another, but a family is a web of organic relationships that develop within defined commitments and roles. If you want the church to be a family, commit to formal church membership.

The family is an organic set of relationships. The nature of these relationships are constantly moving, shifting, changing, and growing as a couple understands one another better, and as their children grow and mature. A healthy family’s relationships are defined by love. People relate to each other naturally—and naturally relate according to the proper structures within the family. Typically, a family doesn’t spend a lot of time repeatedly defining who’s in and out—those boundaries are clear.

Even in the most welcoming family—one whose dinner table is constantly crammed with extra chairs—everyone knows who is in the family and who isn’t. No one needs to delineate who needs to be there for family meetings. You might joke about adopting the neighbor’s kid, but there’s a clear difference in how you relate to him if he’s just in your house a lot or if you actually legally adopt him.

The family also has clear positions (can we say ‘offices’?) of authority in a healthy family. Clarity about who is in charge is good for the life of the family. As much as some parents may think their kids need them to “be their friend,” no family will thrive unless the parents are willing to exercise their parental authority. It’s also important for people to know who doesn’t have that authority. I spend a lot of time right now reminding my firstborn that she is not the parent. In other words, I’m teaching her the nature of her relationship to her younger sibling—and it isn’t the same as mine and her mother’s relation to the people smaller than us in the house.

Likewise, clarity on who is a part of a church and who is entrusted with what authority in a church is crucial to its health. A healthy, mature congregation likely won’t need to spend as much time defining those things because they’re already clear. But where they are unclear, definition and clarification are essential to a healthy family life. Formal structures are important tools for clarifying those dynamics in the relationships of the church.

Scripture commands us to submit to our leaders (Heb. 13:17). Scripture teaches us that elders will give an account to God for the flock he placed them among (Acts 20:28, 1 Pet. 5:4). Scripture teaches us that if a brother is in unrepentant sin, and will not listen even to the church, we ought to discipline him and put him out of our fellowship (Matt 18:17, 1 Cor. 5:1–2). To which relationships of yours do these commands apply? Your favorite pastor whose podcast you listen to, or whose sermons you watch on YouTube? To your Christian friend who lives in another city? Obviously not. Then who?

I remember when a college student began attending our church. All the college kids knew she was there because she was interested in a guy. After she had attended for about two months, the college pastor told her she needed to start serving. In his mind, if she was around this much, she was committed. But she hadn’t ever said she was committed to this congregation. So were we now committed to her? What was the church’s obligation to her? What was her obligation to us?

Clarity on membership marks out those to whom we’ve committed. It keeps us from overstepping our bounds with others. It clarifies whom we must give an account for before the Lord.

Along with clarity, formality also increases relational intimacy. Many prospective members intuitively suspect that a formal membership process creates relational distance. It can feel awkward, like being set up on a date—the fact that someone told you that you should like each other makes everything feel more stilted.

Even in TV shows where the characters have lived together for multiple seasons, everyone knows that getting married is meaningful, moving, and good for the relationship. Marriage is good for the depth of a couple’s relationship precisely because in it, the couple makes explicit and formal commitments to each other. The formally committed (covenanted) relationship provides meaningful, concrete assurance that the parties involved are there for the long haul.

Formality increases and improves intimacy. Just as the marriage covenant only increases intimacy between a husband and wife, clear formal commitment to a local church provides a context in which Christian love and care for brothers and sisters can best flourish.

FORMAL STRUCTURES HELP YOUR CHURCH FEEL LIKE A FAMILY

Allow me to shift metaphors right at the end, formal structures within the life of the church are like bones. You don’t want the entire body to be only bone. But bones are necessary for the health and flourishing of the body as a whole.