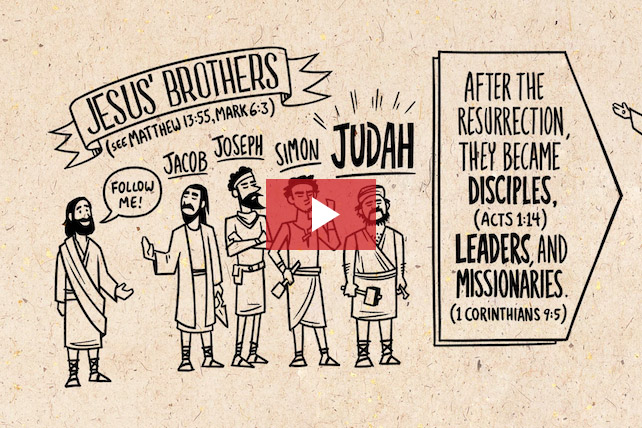 There is a book of the bible that seems easier to neglect than others. The reason for that neglect is not necessarily because of its content but because it’s so short. At only 25 verses and a little over 460 words long, the epistle of Jude is one of the shortest books of the entire Bible. Beware though of letting the shortness fool you into thinking that the Epistle of Jude is anything but hard-hitting. The creators behind the Bible Project provide the following video overview of this small but blunt letter.

Jude (Judah in Hebrew and Greek) was one of the four brothers of Jesus mentioned in the New Testament. Initially, the Lord’s brothers did not believe He was the Messiah but eventually did believe and became leaders and missionaries in the early church movement (Acts 1:14; 1 Cor 9:5). We are not sure what Christian community Jude was writing too, but the community seemed to be made up of Messianic Jews, due to the letter’s writing style, which assumes a deep knowledge of the Hebrew Scriptures as well as other sources of ancient Jewish literature.

Verses 1 through 4 finds Jude exhorting this Christian community to “contend for the faith” because corrupt teachers had infiltrated the church. Ironically, Jude does not attack their message but instead, attacks their way of life. Specifically, these teachers were distorting God’s grace as a license to sin and thereby rejecting the authority of Jesus. In verses 5 through 10, Jude provides more weight to his argument by reminding his audience of particular judgments of God located in the Old Testament such as the ones elicited by the pre-creation rebellion of angels, the nation of Israel’s rebellion, and Sodom and Gomorrah.

Jude provides more judgment examples in verses 11 through 13 to show how sin can corrupt other people. The rebellions of Cain, Balaam, and Korah must have been hard hitting examples for Jude’s audience because those rebellions caused massive amounts of human suffering. In verses 17 through 19, Jude cites popular Jewish literature that foretold God’s judgment and ties those pronouncements to the words of the apostles who predicted the arrival and danger of false teachers.

In the closing verses of 20 through 25, Jude explains what it means to “contend for the faith.” He gives us three action items: 1) build our lives on the holy faith; 2) build ourselves on the foundation of prayer and; 3) stay alert for the return of Jesus. Thankfully, Jude reminds his audience (and us) that it is Christ Himself who will enable the Christian community to stand in the midst of hardship.