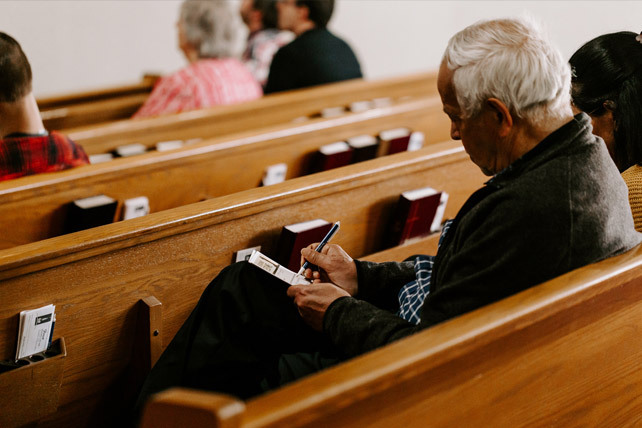 In the 1960s, someone who was not active in church might get up, go out to pick up the newspaper, and feel a little guilty watching neighbors heading off to worship. Today it would be just as uncommon for someone checking their news feed to feel any guilt about not attending church.

In Parts 1, 2, and 3 of this series we looked at biblical literacy and ways to communicate effectively. In this article I want to address one of the challenges pastors have to confront today: inconsistent church attendance. While the extent and pace of decline depends on who conducts the study and their metrics, the fact of the matter is that the majority of churches are experiencing a drop in weekly attendance.

The pandemic impacted church attendance like nothing in our lifetime, and most churches have not recovered fully from its impact. But even before the pandemic there were troubling statistics about attendance. In 2019, Lifeway Research reported, “Six in 10 Protestant churches are plateaued or declining in attendance and more than half saw fewer than 10 people become new Christians in the past 12 months.” A Pew research study from 2017 revealed several reasons U.S. adults who “attend religious services a few times a year or less” do not attend on a more consistent basis:

Today the perception of “regular attendance” has dropped from attending weekly to attending monthly. According to a Pew Research study in 2015, only 36% of U.S. adults “say they attend religious services at least once a week.” This tells us that there has been a marked shift in modern American priorities and cultural expectations. The pandemic only accelerated this trend. You can add to that what I call the Great Sort, where many people in 2020 changed churches—often churches they had attended for many years—because of disagreements over current issues from masks to political views. Others stopped attending altogether.

Our natural inclination may be to berate people for missing church, but instead, we should point people to the reason we attend church: God.

I appreciate how Eugene Peterson says it in A Long Obedience in the Same Direction:

One of the afflictions of pastoral work has been to listen with a straight face to all the reasons people give for not going to church…There was a time when I responded to such statements with simple arguments that exposed them as flimsy excuses. Then I noticed that it didn’t make any difference. If I showed the inadequacy of one excuse, three more would pop up in its place. So I don’t respond anymore. I listen (with a straight face) and go home and pray that person will one day find the one sufficient reason for going to church, which is God.

We know that you can’t love Jesus and despise his wife, the church. But the shift of people attending monthly rather than weekly greatly affects ministry in the church. Many children’s ministers find they need two people to staff what was previously a one-person role because of irregular attendance patterns due to travel, sports, or no particular reason at all. Many churches have started asking members to commit to serving two Sundays each month in response to this trend.

This shift brings implications for preaching as well. Scott Slayton writes, “We think we can change people by simply appealing to their wills. Let’s show them all, all the reasons why attending church less is bad for them.” He adds, “This type of approach might change people for a season, but it will not alter the love of their hearts and produce lasting change.” Think about eating healthy: we know it is good to eat well but many of us don’t regularly get that many servings of fruits and veggies.