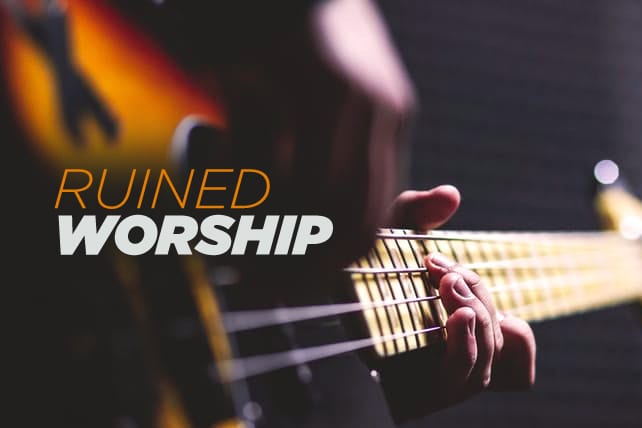 For most of my life I’ve been a huge advocate of contemporary worship. I nearly got thrown out of the church I grew up in because in my early 20s I formed an ensemble that sang the dangerous, worldly and mind-blowingly contemporary song called “Carry the Torch” for the Sunday night “special music” (here’s a Youtube video of the song from some church somewhere—our version probably didn’t sound much different). The pastor then had to preach a message about me the following week to assure the congregation I wasn’t of the devil.

Needless to say I’m thrilled that the nonsense of the traditional worship wars have died off. Isn’t it wonderful to have the freedom to do just about any music you want these days? (Yes, even dance-pop!)

So for most of the mid-’90s to the mid 2000s things were great—you still had spiritually minded worship directors who were doing the job because of a calling (certainly not for the salary, because there wasn’t much of one). According to my poll, less than 20 percent of church music directors are full time, even in this day and age.

But then something happened that has absolutely ruined contemporary worship: the CCM industry collapsed.

In CCM’s heyday, a young, hopeful artist would make her way to Nashville, get plugged into a church (probably Christ Community in Franklin,) make connections, stumble upon a record deal, make a CD and start touring with a more established CCM artist. Those days are over for the most part.

As the CCM industry started to die in the mid 2000s, young, hopeful artists would still move to Nashville looking for a deal. They’d even attend Belmont, make an independent CD since they couldn’t get a deal, fail and end up in a worship leader job.

Now a young, hopeful CCM artist who really has no interest in being a worship leader goes straight into a worship leading job so he can make a living in music—there are simply no record deals to be had. Incidentally, I just heard about a famous worship leader who has “made it” to the point that they no longer have to be tied to their church. So they’ve left their worship leading job, hoping to live the life of a ’90s CCM artist. We’ll see how long that lasts.

How does this happen? An article I posted this week says it succinctly:

To be thoroughly contemporary necessitates a slavish allegiance to the new, the current, the hip, the cool and the commercial.

Contemporary worship leaders aren’t leading worship—they’re performing it. That’s why they must have new songs every week. A friend of mine is a hipster guitarist in a megachurch and even he is sick and tired of the constant onslaught of new songs. But then again, his worship leader is … a failed CCM artist who has ended up in a worship leader job. The guitarist laughed: “Can we not repeat at least ONE song that’s six months old?” It’s a bizarre insecurity on the rock star worship leader’s part—he’s terrified of repeating a six-month-old song for fear of being dated and out of touch.

This also explains the ridiculous, unsingable keys of modern worship. The rock star worship leader, most likely a high tenor, must pitch the songs in the perfect key to fit his voice. And those keys unfortunately are not accessible by the mere mortals in the congregation (not that they could sing those songs anyway since they’re all new every week and nobody knows them).

Glenn Packiam urges us to not paint all megachurches with a broad brush. Glenn, I hear you, and I can imagine there are megachurches out there, somewhere, who are doing things right. But gee whiz—the megachurches I visit, all across the country, all seem to have this same rampant rock star problem. It’s not the songs—it’s the performers who are more interested in their hipness (how they look, how they sound and what they sing) than helping people connect to God in worship.

This problem is not exclusive to megachurches, either. However, if I’m visiting a megachurch, it’s usually one of the top 25 in the country—the ones hosting conferences and setting the precedents smaller churches are copying.

Is change in the air? From blogs and social media, I’ve read countless articles in the past few months where those mere mortals in the congregation are fed up—and speaking out. Change unfortunately won’t take place until pastors stop hiring those exciting rock stars and start hiring true worship leaders and directors who are called.