“That’s how to do it right there!” Fallon said enthusiastically as he greeted Daigle after she was finished singing.

Accompanied by a band and three backup singers, Daigle wowed the audience with her soulful voice. The song she performed conveys a conversation between a disheartened person and God. Although it doesn’t mention God by name, the implication is there that the songwriter is speaking to God and he is speaking back.

The lyrics for “Look Up Child” are as follows:

Daigle recently weathered criticism for appearing on The Ellen Show, which some construed as an endorsement of the host, Ellen Degeneres’, homosexual lifestyle. Daigle addressed the criticism by saying, “The second we start drawing lines around which people are able to be approached and which aren’t, we’ve already completely missed the heart of God.”

Daigle went on to comment, “I don’t have all the answers in life, but one thing I know is that I can’t choose who I’m supposed to be kind to and who I’m not, because that’s the mission, right? Be who Christ was to everyone as well.”

The reactions to her appearance on Jimmy Fallon’s show tell a different story, though. Several people are commenting on the fact that Daigle, an outspoken Christian, is being applauded for her songs, which speak about God, on a majorly popular secular show. A lot of people see this as progress for the cause of Christian music. 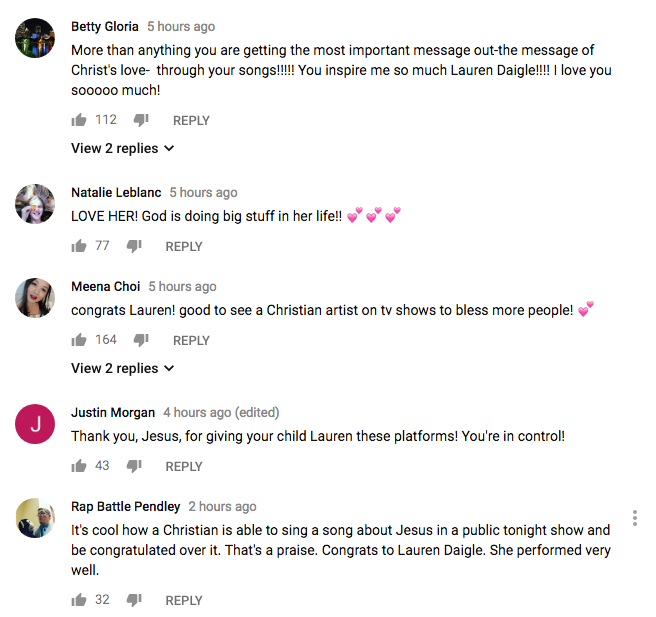 It will be exciting to see what Daigle does next. She has indicated that she would like to work on some cross-over music in an attempt to “reach people that might not have felt that [the Christian genre] was their home before.”