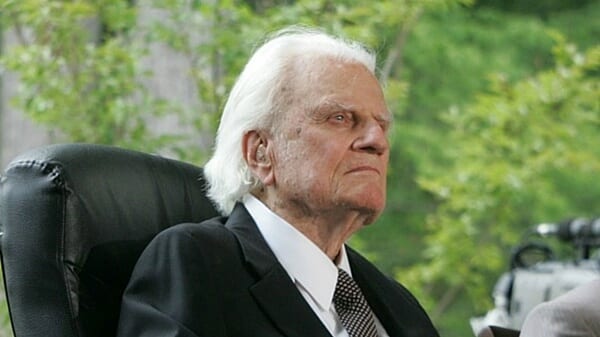 If you’ve ever wondered what angels look like, what they do, and if we can see them, Billy Graham has some thoughts for you. Last week, in a Q&A interview with The Kansas City Star, Graham shared his beliefs about angels.

“Yes, angels are real, just as real as you and I are. Although they are largely unseen by us, they exist in great numbers. The Bible speaks of ‘thousands upon thousands of angels in joyful assembly’ (Hebrews 12:22). When Jesus’ birth was announced to the shepherds outside Bethlehem, ‘a great company of the heavenly host appeared … praising God’ (Luke 2:13).”

Because angels are heavenly beings, they do not have physical bodies like we do, but that doesn’t stop us from seeing them. He said, “However, on occasion they can appear as ordinary humans, or even as glorious celestial beings that reflect the majesty of God. When God gave the prophet Isaiah a vision of his glory, his throne was surrounded by angels of great splendor and power: ‘At the sound of their voices the doorposts and thresholds shook’ (Isaiah 6:4).”

Angels were created to serve God and to protect God’s children, even when we don’t know it or can’t see it.

Graham said, “God created the angels for one purpose: to serve him. As such they work in hidden ways to carry out God’s will and protect God’s people. Even when we are unaware of them, they are still part of our lives. They also are part of a great unseen army that constantly fights against Satan and his servants of evil. God’s promise should bring comfort to every believer: ‘He will command his angels concerning you to guard you in all your ways’ (Psalm 91:11).”

Someday we’ll be able to fully grasp all that angels have done in our lives to influence and protect us, which is something to be celebrated, but not worshipped.

“We aren’t to worship the angels; God alone is worthy of our worship. But we can thank God for them, and some day in heaven we’ll realize just how much they’ve done for us, at God’s command. ‘Are not all angels ministering spirits sent to serve those who will inherit salvation?’ (Hebrews 1:14),” Graham said.