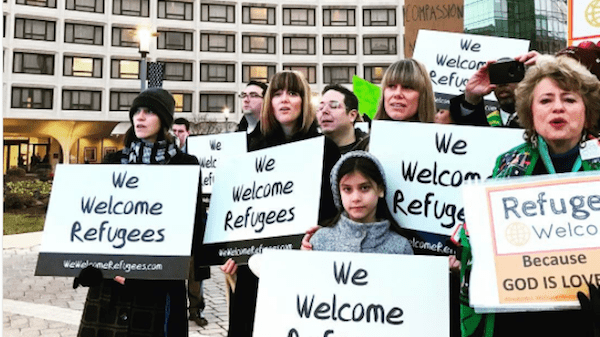 Yesterday, President Trump spoke to political and religious leaders at the annual National Prayer Breakfast at the Washington Hilton in Washington, D.C. While the President drew flack from both sides of the political aisle for his off-colored joke about using the time to pray for Arnold Schwarzenegger’s ratings, another group of critics was gathering outside the hotel to protest Trump’s recent immigration ban. Among those gathered were well-known evangelicals like Ann Voskamp and Bob Goff.

About 200 people gathered outside the to hold signs and pray for refugees. The intent was not to protest the President himself, but to voice concern over the recent refugee ban Trump’s administration has hastily put into place while they re-work the country’s immigration policies.

Voskamp was hesitant to speak against the President, but cautiously offered her thoughts on the issue of immigration: “I don’t think security negates compassion… We have to be motivated by compassion, not by fear.”

Voskamp and Vickie Reddy (also in attendance at the protest) co-founded the group We Welcome Refugees, which has garnered close to 20,000 signature on its “Stand in Solidarity With Refugees” online statement. We Welcome Refugees is one of a handful of evangelical organizations that are pushing back against the recent refugee ban. Scott Arbeiter, the president of World Relief, fears the church in America is missing an opportunity to share the gospel with people from closed-access nations by going along with the ban. “We are closing the doors to the very people that we say we want to share the gospel with,” he says.

Being interviewed by Yahoo News at the protest, Voskamp brought up another hot-button issue facing evangelicals today: “If we as Christians say we are pro-life, that means we have to be pro-refugee.” Coming less than a week after Vice President Pence spoke at the March for Life, these words are pointed.

Although Voskamp expects to be criticized by many evangelicals, she felt it was critical to make a statement about the issue of refugees. “I think once you look into the eyes of people who have fled war, who have left home because home has become the mouth of a monster, you realize that national security can’t ever negate compassion for people who need refuge. Jesus was a refugee. We’re called to love our neighbor without exception.”

Also in attendance was Michael Wear, former faith adviser to Obama. Giving a reason for attending the protest, Wear said “the refugee and immigration executive orders run contrary to our values and the values of many people of faith in this country. So we’re here to let refugees know that they’re welcome.”

Reddy said she hoped the group’s witness would give “moral courage to people walking in the room” to the prayer breakfast. Finally, Voskamp offered this challenge to the church: “I just think we’re called as the church right now to stand up and to be on the right side of history that says, ‘We will risk, we will open the doors for children who are starving.’”