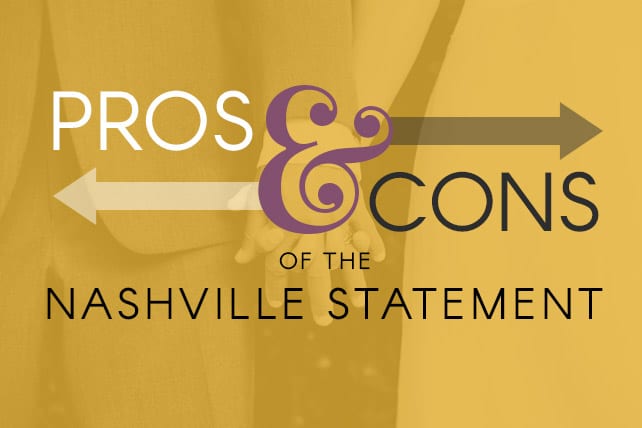 On Tuesday, August 29, 2017, the Council for Biblical Manhood and Womanhood (CBMW) published the Nashville Statement; it’s a kind of evangelical equivalent to the Catholic church’s theology of the body.

“The aim of The Nashville Statement is to shine a light into the darkness—to declare the goodness of God’s design in our sexuality and in creating us as male and female,” says Denny Burk, president of CBMW.

The statement, published on CBMW’s website and aggressively promoted on Twitter by the Council and by the numerous high-profile signers, has already made waves due to its definitive and conservative stance on sexuality.

What the Nashville Statement Says

The preamble to the statement revisits a common theme the CBMW articulates: Our “post-Christian” culture and the “secular spirit of our age” present “a great challenge to the Christian church.”

Specifically, the statement speaks about a troubling trajectory away from traditional gender roles. “It is common to think that human identity as male and female is not part of God’s beautiful plan, but is, rather, an expression of an individual’s autonomous preferences,” the statement reads.

Following the preamble, the statement lists 14 articles that clarify what the authors believe is a biblical interpretation of what God originally intended for sexuality. Each article contains a “We affirm” and “We deny” sentence or two to articulate the points.

The first article is likely to draw the most criticism from LGBTQ-affirming Christians and from the general culture outside church walls. While affirming marriage is a God-ordained covenant between a man and a woman, it denies “that God has designed marriage to be a homosexual, polygamous or polyamorous relationship.”

In Support of the Nashville Statement

The sentiment from CBMW is that they’ve been “overwhelmed” by the support they’ve seen for the statement.

We’ve been overwhelmed by the support we’ve received from those wishing to sign the #NashvilleStatment.

According to Russell Moore, president of the Ethics and Religious Liberty Commission, the statement serves as a kind of anchor in the midst of a very turbulent and confusing sexual culture. “The Sexual Revolution cannot keep its promises, and the church must stand ready to receive with compassion the many who are in need of a better hope,” Moore says.

In Opposition to the Nashville Statement

Not everyone is on board with the statement, however, including the mayor of Nashville, Megan Barry. She issued her own statement on Twitter, saying the document is “poorly named” and doesn’t represent the city.

Some Christians are also opposed to the statement, seeing it as yet another blanket statement with potentially ostracizing repercussions for those who choose not to sign it for one reason or another. Additionally, some feel it gives Christians license to further marginalize their LGBTQ neighbors.

I am only just now reading through the #NashvilleStatement from @CBMW and cronies. I’m sad and unsurprised, angry and protective all at once

Demonize the other and loving your own is the easy and natural thing to do. The broad path that leads to destruction.

Others have criticized the timing of the statement.

In the middle of a humanitarian crisis, in one of the most divisive years in memory @JohnPiper & co. chose to do harm. #NashvilleStatement

A group known as the Liturgists, who tend to lean on the progressive side of faith, have issued their own statement in response to CBMW’s. The counter-statement calls into question the timing of CBMW’s statement—a time of turmoil for the nation as we struggle to rescue people from the aftermath of Hurricane Harvey—and the motive behind it. “For far too long, the Christian Church has oppressed and marginalized people because of their gender and/or sexual orientation,” the counter-statement reads.

Wherever your stance on this issue, please comment on it and speak about it with grace and humility, understanding there are people—Christians and non-Christians—who are on both sides.