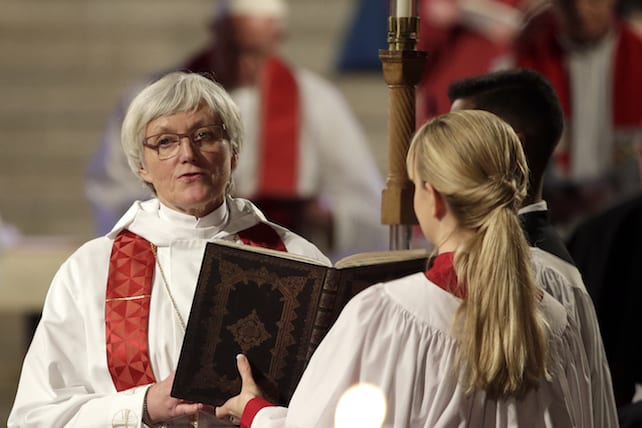 The Church of Sweden is in damage control mode after reports that it is instructing its clergy to stop calling God ‘He’ or ‘the Lord’ in an effort to crack down on gendered language.  One church spokesman called the reports “fake news” saying the language change in the denomination’s 31-year-old handbook was only a suggestion.

News of the change was met with a mountain of criticism.  Christer Pahlmblad, associate professor of theology at Sweden’s Lund University, lambasted the language, telling Kristeligt Dagblad “You cannot replace 2,000 years of theology” and that the move toward gender-neutral language was “undermining the doctrine of the Trinity and the community with the other Christian churches.”

Critics say the guidelines contradict both the Holy Bible and the Holy Trinity, the latter which refers to God as “the Father, the Son and the Holy Spirit.”

“So Jesus said, ‘When you lift up the Son of Man, then you will know that I am He, and I do nothing on My own initiative, but I speak these things as the Father taught Me,’” reads John 8:28 (NASB).

THESE WERE ONLY “SUGGESTIONS”

In spite of the fake news label, the change does appear to be in keeping with the direction of the church’s leader, Archbishop Antje Jackelen who was elected in 2013 on a progressive platform.  She championed the decision and said that the Church of Sweden had discussed having more “inclusive language” since 1986, according to Mirage News.

The use of gender-neutral words to identify God is not unique to the Church of Sweden.  There is a similar movement in the US, especially in mainstream seminaries.

The divinity schools at Duke and Vanderbilt Universities have instructed their professors to use more inclusive language as a way to “mitigate sexism” because of the belief that masculine pronouns “have served as a cornerstone of the patriarchy.”

And it’s not just university professors that the schools are hoping to influence.  Duke’s guidelines for students, faculty, administrators, and staff offers several suggestions for replacing “God” including “Godself” as in “God knew Godself to be great.”

The issue is also a longstanding area of debate for Bible publishers that bubbled to the surface again last June. The Southern Baptist Convention, a long time critic of gender neutrality in the Bible, came out with the Holman Christian Standard Bible.  In reporting on the release, The Atlantic wrote that the new offering contained many gender-neutral phrases that the SBC had previously condemned.

The article drew quick reaction from the SBC and many conservative pastors who said the Atlantic was confusing “gender-neutral” with “gender-inclusive.”   Trevin Wax, Bible and Reference Publisher for Holman Bibles, told the Atlantic, “It uses male pronouns for God, for pastors, and in places where it’s obviously male—and it uses male and female, where that’s what the author intended.”

What Bible translation controversies and this latest controversy with the Swedish church point to is an ongoing debate over how we should refer to God and our culture’s increasing desire to be gender-neutral.