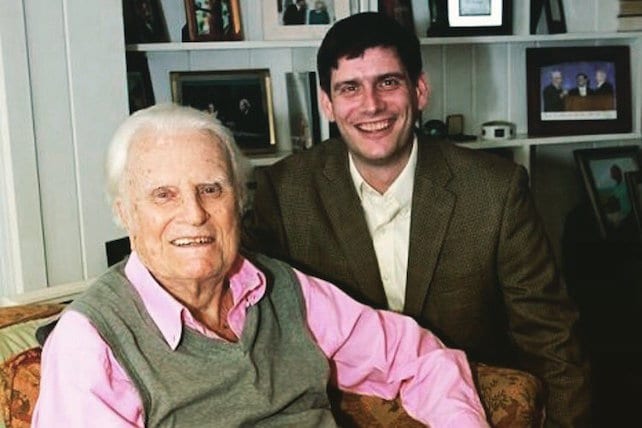 Undoubtedly, Billy Graham is one of the most influential preachers of our modern era. Billy Graham’s grandson, Will Graham, got to act as his grandfather in an upcoming film.

Will Graham is a preacher himself, although his familiarity with his grandfather’s line of work didn’t completely assuage the anxiety he felt over portraying the most famous member of his family. Speaking to Deadline, Will Graham said, “I’m a preacher, not an actor. I was only doing in the movie what I do in life, and I was praying that God would give me the ability to do it. I was definitely out of my comfort zone, but that just meant that I had to rely on God more.”

The Extraordinary Life of Louis Zamperini

The film is Unbroken: Path to Redemption and portrays another chapter in the life of Louis Zamperini, an Italian-American who fought in WWII and survived a plane crash in the Pacific ocean and internment in a Japanese prison camp before returning home. The original film about that time of Louie’s life, Unbroken, was released in 2014. Director Angelina Jolie faced criticism for not being more direct about Zamperini’s journey to Christianity. The new film picks up where the first left off, and goes into more of the details concerning that faith journey.

Upon returning to the U.S., Zamperini faced what society now understands to be post-traumatic stress disorder. The condition drove him to alcoholism and had a negative impact on his marriage. It was Zamperini’s wife who convinced him to attend a crusade led by Billy Graham in Los Angeles in 1949.

Will Graham explains Zamperini “hated everything he heard, and walked out the back,” the first time he attended the crusade. However, he remembered a promise he made to God while drifting on the Pacific after his wartime plane crash. Zamperini had told God that if he would save him, Zamperini would serve him forever. This thought compelled him to return to the crusade a second time. Will Graham explains that second time something happened. “When he got up to leave, he felt like he couldn’t physically leave and then he gave his life to Christ. His nightmares stopped. He got his Bible that he got when he first joined the Army and started to read it and he stopped drinking.”

The crusade Zamperini attended started September 25, 1949, and was only supposed to last a few weeks. Will Graham explains the incredible events that transpired to keep the crusade going:

“The campaign went longer after an ‘impossible’ convert—a popular Los Angeles radio personality who was an alcoholic named Stuart Hamblen was converted. The campaign kept being extended—and the tent kept being enlarged—when people like Jim Vaus Jr., the wiretapper for mobster Mickey Cohen, also was converted. It lasted for eight weeks—until Sunday, November 20, right past my grandfather’s 31st birthday on November 7.”

It’s a good thing the crusade was extended, not only for the famous converts who came to Christ, but also for Zamperini, who didn’t attend until long after it was originally scheduled to conclude.

Preparing for His Role

Will Graham was instructed not to try and imitate his grandfather for the movie, but instead, preach as he normally would. “I don’t know how he preached the way he did,” Will Graham says. “He never took a breath! His text was all over the place; he was not an expository preacher.”

Although his assignment wasn’t to exactly imitate his grandfather, Will Graham did prepare for shooting by reading Laura Hillenbrand’s book Unbroken, which the movie was based off of. Will also listened to audio recordings of his grandfather preaching. The sermon Will was asked to portray was Billy Graham’s “Why Does God Allow Communism,” which addressed a question a lot of Americans were considering in 1949, on the heels of the Cold War breaking out.

When he’s not shooting movies, Will Graham serves as vice president of the Billy Graham Evangelistic Association and as executive director of the Billy Graham Training Center at The Cove in Asheville, N.C. The son of Jane and Franklin Graham, Will is known for leading his own brand of crusades known as “Celebrations.”

The new Unbroken film will be produced by the Christian film company Pure Flix. Shooting for the film has been completed, and a fall 2018 release date is expected.