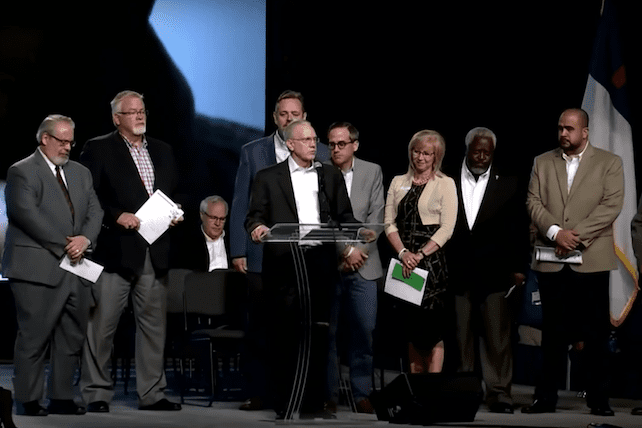 For far too long, we’ve been wrong. We were wrong about slavery. We were wrong about Civil Rights. Now many of us are wrong about the #MeToo movement. The Southern Baptist Convention has been wrong about horrifying sins. Obvious sins. Massive sins affecting generations. Right now, we’re a dumpster fire, and we keep fueling it with shovels of manure. We’re full of it, and the world is watching. That’s not hyperbole.

We need repentance, not excuses. God’s wrath is upon us. Our God is a consuming fire. Excuses will work like tiny strands of straw standing against a raging wildfire. There should be no sermon at this year’s annual convention. Leave the pulpit vacant. Let the room be silent and call the messengers to prostrate themselves in repentance.

We need humility, not charisma. Our convention has wrongly elevated charisma over humility. The bold leaders with pithy lines tend to get the most attention. It’s time we submit to humility instead of charisma.

There are thousands of no-name pastors out there faithfully serving the bride of Christ. They get no attention—no book deals, no blog views, no Twitter followers, no positions of power. We need more pedestrian pastors like my wife’s grandfather. He toiled in obscurity among the rolling fields of Kentucky farms, shepherding in poverty without any glory or recognition. He preached the gospel until he died, then was forgotten. Give us more like him.

We need to care about character as much as we do about doctrine. We fought battles over doctrine, and the spoils of war went to power barons who lacked integrity. The conservative resurgence has not even brought about an increase in baptisms, much less revival. Instead, we are now flooded with the moral failures of former foot soldiers.

God is purging us. We need a new era—one defined by character as much as doctrine. Before you label me with assumptions, let me say I’m neither a liberal nor part of any Calvinist conspiracy. I led our church to rework our doctrinal statement to include the word inerrancy and make it a requirement for membership. And I’m a happy three-pointer who can make friends with just about anyone along the sliding scale of Reformed theology.

We need new earthly heroes. We have our heavenly Hero. Jesus is turning our tables of power right now. He’s driving out some of us with a whip of cords. The supreme place is for Jesus, and He will take it one way or the other. But we also need some new earthly heroes. How about the courageous women who have come forward to share their stories of abuse? How about the people of color who have stuck with us despite our gross legacy of slavery and racism? They are the true heroes of the SBC.

The prophet Hosea called for repentance. In order to return to God, the people had to be torn to heal.

We should be appalled. Horrified. Sick. No more “break her down.” We need God to break us down.

The good Lord may just rip us apart to heal us.