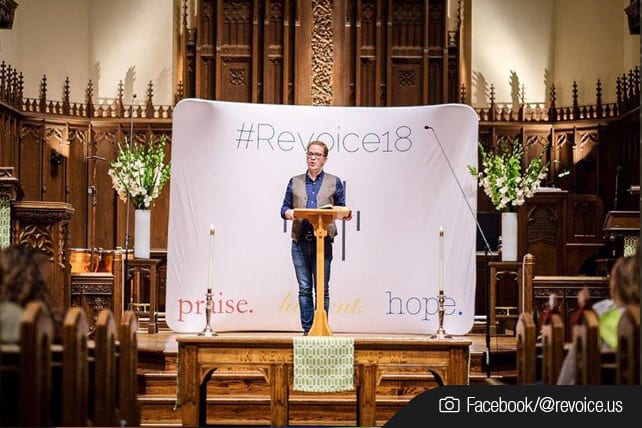 The controversial Revoice conference garnered a lot of attention before it even began. Now that it’s over, what actually was said at the gathering?

The conference’s three general sessions are available on YouTube. The theme for session two was “lament.”

After seminary, Low served for three weeks as a youth pastor before being fired when another church in the area publicized his homosexuality. Low said although he is attracted to men, he is committed to a life of obedience and agrees with the church’s teaching about sexuality.

Still, he lost his job when church members spread rumors about him being a pedophile. Although he told other staff members about his homosexuality, “the church saw me as a liability,” Low told Revoice attendees. “I would challenge the church in a new way and force the church to confront the issue and not run from it.”

Low said he is celibate but doesn’t see anything wrong with his same-sex attraction. “Everyone is called by God to a purpose. That purpose was taken away,” Low said of his firing. “It’s hard for us to fit in without being judged, given a litmus test regarding our beliefs.”

Low was followed by conference organizer Nate Collins who lamented “the way the church treats homosexuals.”

In his message, Collins likened LGBTQ Christians to prophets, pastors who refuse to hire homosexuals to “false teachers,” and the nuclear family to idolatrous “sexual pleasure.”

“Is it possible that gay people today are being sent by God like Jeremiah to find God’s words for the church to eat them and make them our own? To shed light on contemporary false teachings and even idolatries, not just the false teachings of the progressive sexual ethic but other more subtle forms of false teaching? Is it possible that gender and sexual minorities who have lived lives of costly obedience are themselves a prophetic call to the church to abandon idolatrous attitudes toward the nuclear family, toward sexual pleasure? If so, then we are prophets.

“But to embrace this calling, we also embrace the lament. For we will be persecuted… We have suffering and injustice to endure… Jeremiah’s primary ministry was to call Judah to repentance. Jeremiah experienced enormous suffering as a result of faithfulness to his calling.”

So, Nate Collins considers himself, & other “Gay Christians,” to be modern day prophets to the church to call us to repentance for our idolatry of the “nuclear family?” It’s somehow “idolatrous” for the church to embrace & uplift God’s created design of the nuclear family?