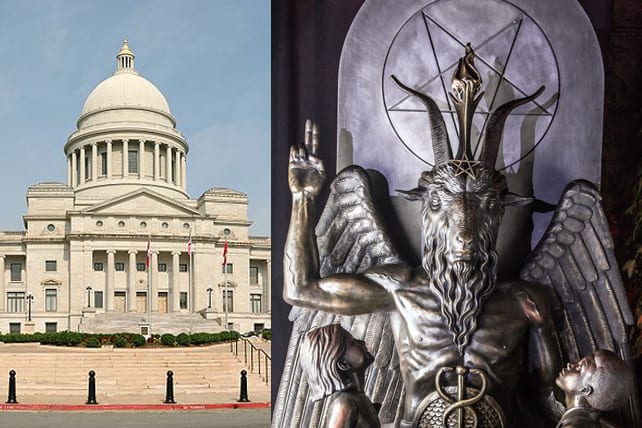 The Satanic Temple unveiled a statue of Baphomet, a goat-headed winged creature, on Thursday August 16, 2018, on the grounds of the State Capitol building in Arkansas. The figure is accompanied by two smiling children looking up at him.

More an attempt at a power struggle than an act of devotion to Satan, the monument’s presence was intended to protest the Ten Commandments monument that was installed at the Capitol in 2017. Satanists, atheists and even Christians came to the First Amendment rally where the eight and a half foot monument was unveiled.

According to CBS News, “The monument arrived on a flatbed truck and was unveiled at the bottom of the capitol steps, CBS affiliate KTHV reports. Meanwhile, the Ten Commandments stood behind a screened fence surrounded by caution tape… The Satanist group removed the statue later Thursday.”

“If you’re going to have one religious monument up then it should be open to others, and if you don’t agree with that then let’s just not have any at all,” Ivy Forrester, Satanic Arkansas cofounder and one of the organizers of the rally, said.

Speaking of the Baphomet statue, Rapert called the protestors “extremists” and said “it will be a very cold day in hell before an offensive statue will be forced upon us to be permanently erected on the grounds of the Arkansas State Capitol.”

On Thursday in Arkansas, the rally drew about 150 people in attendance. A smaller group of Christians stood nearby counter-protesting with signs with Scripture on them, but the situation remained peaceful.

What Is the Satanic Temple?

The Satanic Temple describes itself as a group whose mission it is to “encourage benevolence and empathy among all people, reject tyrannical authority, advocate practical common sense and justice, and be directed by the human conscience to undertake noble pursuits guided by the individual will.”

Confusingly, the group tries hard to distinguish itself from Satanic cults or the Church of Satan, which worship Satan. In contrast, the Satanic Temple does not “worship a personal Satan” and concerns itself with the public sphere. The group has done things like oppose Westboro Baptist Church and offered clubs for children in schools as an alternative to religious after-school clubs.