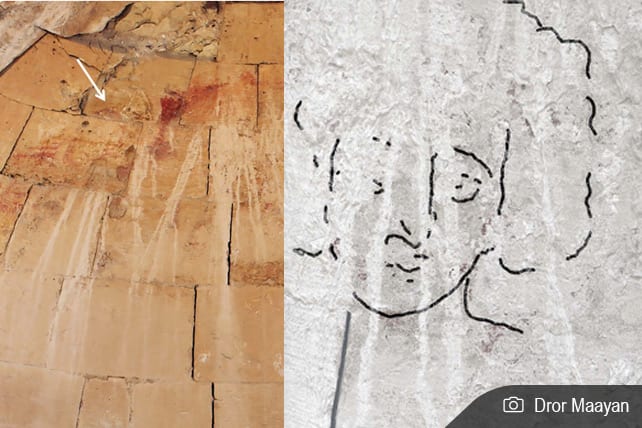 Archaeologists have uncovered a painting of Jesus Christ at the ruins of a Byzantine church in Israel’s Negev desert. The painting portrays a youthful Jesus with “short curly hair, a prolonged face, large eyes and an elongated nose.”

Experts believe the scene the painting portrays is the baptism of Christ due, in part, to its location in the Baptistery chamber inside the church.

The painting was found in Shivta, which is about 43 kilometers southwest of Beersheba in Israel’s southern district. Shivta peeked into a large village during the Byzantine period (5th and 6th century A.D.). Shivta was abandoned during the Islamic period (the 7th to late 9th centuries A.D.), then the ruins were discovered in the 19th century. Experts from Israel’s University of Haifa believe the church was constructed in the 5th century A.D.

This Kind of Painting of Jesus Is Rare

An excerpt from the article announcing the discovery in Antiquity Magazine gives a description of the painting and its surroundings:

Due to poor preservation, the painting was only briefly noted in the late 1920s. Despite its fragmentary condition, it reveals a youth’s face depicted on the apse’s upper section. The figure has short curly hair, a prolonged face, large eyes and an elongated nose. The neck and upper portion are also observable. To the left of the figure, another, much larger face surrounded by a halo is visible. Paint traces throughout the apse suggest that these faces were part of a wider scene, which could contain additional figures. The location of the scene—above the crucifix-shaped Baptist font—suggests its identification as the baptism of Christ. Thus, this face portrays the youthful Christ, while the face on the left is most probably of John the Baptist.

The face of John the Baptist next to Jesus is larger and therefore implies John is older. As the article explains, this is in line with depictions of baptisms from that time period. “Following the scene’s Early Christian iconographic convention, John the Baptist is clearly proportionally larger than Christ, whose painted figure is much smaller and younger. Christ’s depiction as a youth corresponds to the symbolic notion of baptism as a rebirth,” the article states.

According to Antiquity, the image of a short-haired Christ was “especially widespread in Egypt and Syro-Palestine, but gone from later Byzantine art.” For this reason, the experts believe the painting dates to the 6th Century A.D. If this estimate is accurate, the painting is about 1,500 years old.

The archaeologists working on the painting are determined to preserve it and continue studying it to see what else they may be able to uncover.

Home City of Peter, Andrew and Philip Uncovered by Archaeologists