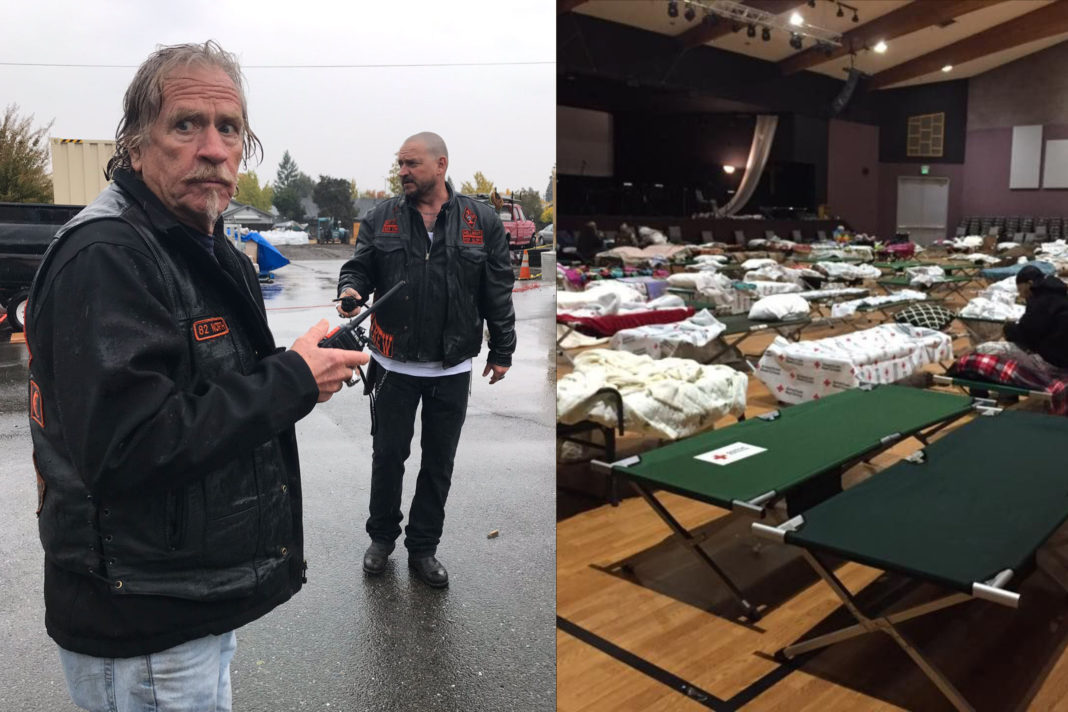 The 823 Hellbent Motorcycle Club of Chico, California, has been providing the victims of California’s deadly Camp Fire an unusual service: protection against looters and troublemakers.

This year has been the worst fire season California has experienced in the past 15 years. Tens of thousands of people have been displaced. With over 85 dead, CNN calls the recently contained Camp Fire the state’s “deadliest fire,” noting, “Since it began November 8, the fire has destroyed almost 14,000 homes, 514 businesses and 4,265 other buildings. It has covered more than 153,000 acres, roughly the size of Chicago.”

Many churches have stepped up to provide aid to the fire victims. Chico’s East Avenue Church, despite not being an official evacuation center, has offered shelter to around 250 evacuees. With only minimal assistance from the government, volunteers have supplied meals, clothing and medical care.

The Greatest Need Was Not What You’d Think

However, in the initial days after refugees started arriving at East Avenue, the biggest need, according to Pastor Ron Zimmer, was not for material goods, but for security. Speaking to the Paradise Post, Zimmer said that evacuees needed “someone to keep an eye on their families, to protect their traumatized children, cast a watchful eye over what belongings they still had and to defend the elderly.”

It was not the fire victims themselves who were causing problems. Hellbent 823 chapter President Matthew “Straws” Strausbaugh says that the issue was “the local transient population.” The disruptions were more than the local police could handle—after responding to the church’s calls several times, the police stopped coming by.

One of the attendees of East Avenue Church is friends with Strausbaugh and asked if he and his club could help. Less than an hour after arriving, the bikers got rid of around 60 troublemakers. Strausbaugh says, “There was drugs, shooting galleries going on in the back where the tents are…there was a bag of needles that was found near the children’s center.”

It turns out that the situation was even more than the members of Hellbent 823 could handle on their own. So they called for help from other biker clubs, including the Sons of Hell, the Street Outlaws and the Hells Angels. The Resurrection Motorcycle Club of Paradise also joined in aiding the evacuees, even though the club members’ entire town had recently been destroyed.

The bikers have not had to use violence to enforce security, but instead have relied on their “street savvy” and intimidating demeanors. Says Strausbaugh, “What we do best is to stand there and look ugly… We look hard and we are hard, and if pushed we can push back in a way that isn’t pleasant. But we also have a soft spot for the little guys.”

Hellbent 82 North member Craig Dunbar says that offering such services is common for biker clubs, even though they don’t necessarily broadcast their charitable work. Pastor Zimmer says that the club members have brought peace and order to the shelter and describes the service the men have provided as “terrific, outstanding, remarkable.”