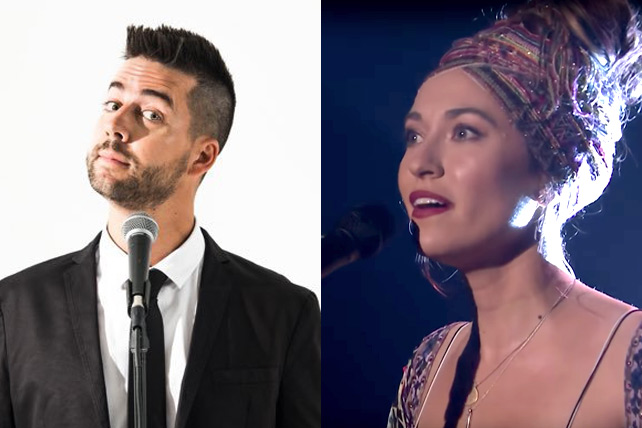 John Crist is known for making bold statements (veiled in comedy most of the time) on controversial issues in the church. Crist just made another statement, but this time he didn’t bother to sugarcoat the heart of his message. Speaking of the backlash Christian artist Lauren Daigle has received for her recent comments on homosexuality, Crist has a succinct message for her nay-sayers: “get out” and “shut up.”

Lauren Daigle “has done more for the kingdom in a year than you will do in five lifetimes,” the comedian says in a video posted to his Instagram account.

Crist takes issue with critics of Daigle who heard about or listened to a recent interview the artist did with radio host Domenick Nati. In the interview, Nati asks Daigle if she believes homosexuality is a sin. Daigle responded she can’t “honestly answer” because many people she loves are gay. “I can’t say one way or the other. I’m not God,” she went on. When people ask her that question, she usually encourages them to study the Bible and come to their own conclusions. Daigle added, “And when you find out, let me know, ‘cause I’m learning too.”

Critics of Daigle believe she should have explicitly called homosexuality a sin. Some are asking others to stop listening to Daigle’s music. Some, as Crist points out in his video, are making the “shallow” argument that Daigle might not be a Christian based on this response. They are also questioning whether Daigle should have appeared on The Ellen Show since the host is homosexual.

Who Are We to Question Whether Lauren Daigle Is a Christian or Not?

Crist says, “I probably did 27 things yesterday that if you had witnessed, you would be like, ‘Wow. I thought he was a Christian.’” He then lists things such as scrolling through Instagram instead of reading his Bible and cutting someone off to get into the Taco Bell drive through. His point is we all do things that others can point to and consequently question our standing with God. Daigle is no different.

In the meantime, Crist believes Daigle has done much to advance God’s kingdom. “Lauren Daigle—I’m sorry, like hundreds of songs lifting up the name of the Lord and led people to the Kingdom and articles and stories,” he continued, “and one time she doesn’t say something that isn’t how you liked it? Get out.”

The comedian says he understands holding people to higher standards, but “if you have a negative opinion about another person that you don’t know personally, just like have it, and then just like throw it away.”

Crist gets visibly upset a couple of times in the 1:32-video. At one point he places his Snapple-laden hand over his eyes and cuts the video. The words “I’m legit heated” appear over the video at this point.

The comedian also refers to the flack Pastor John Gray has received recently for purchasing his wife a luxury vehicle. Lumping the controversial actions of Daigle and Gray together, Crist says, “If you’re going to come out with your pious John Gray or Lauren Daigle trash talk, then every Tweet, every song that gets played, every post, every Instagram that glorifies the name of the Lord should just be celebrated…and if you’re not, then shut up.”

To hear Crist’s full “rant” (that does include more of Crist’s quintessential humor), you can watch the video on his Instagram page.