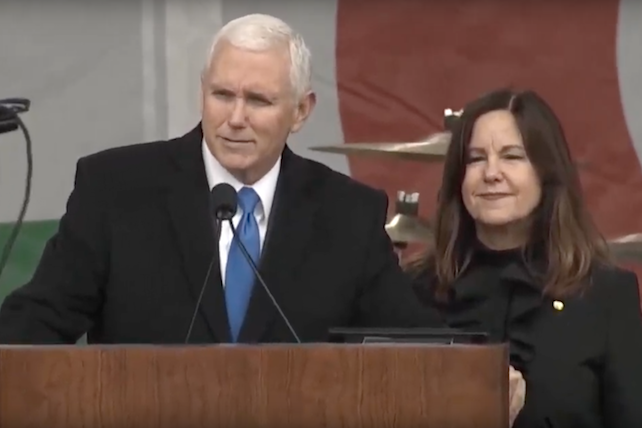 The 46th annual March for Life rally is currently taking place in Washington D.C. and thousands have flocked to the nation’s capital to show their support for the movement. This year, a number of high-profile pro-lifers spoke to the attendees, including Vice President Mike Pence and his wife, Karen.

“Life is winning in America once again,” the Vice President told the attendees.

Mike Pence’s speech turned spiritual when he paraphrased Scripture to encourage attendees to be bold in their support for life. “Be prepared to give a reason for the hope you have. Be prepared to stand for life,” he said. He also warned attendees that others will attack them and try to silence them, but they should not be discouraged by that. He admonished pro-lifers to push back with gentleness and to remember that the one who said “before I formed you in the womb I knew you” also said he would never leave or forsake you.

The Vice President, who became the first Vice President in office to attend the March for Life in 2017, did not give up the opportunity to sing the praises of the administration he represents, though. Giving a brief recap of the things the Trump administration has accomplished related to abortion, Pence reminded the crowd of the following:

According to Pence, Trump has “appointed more conservative men and women to our federal courts of appeals than any president in American history.”

Karen Pence introduced her husband as “a very pro-life person” while the Vice President used his opportunity on the platform to introduce the “most pro-life president in American history,” President Donald Trump. In a pre-recorded message, Trump addressed the crowd and outlined the things he had accomplished for the pro-life movement. He also thanked the young people who showed up to the rally, saying their presence gives “hope for the future.”

The theme of the march this year is “unique from day one,” although March for Life president Jeanne Mancini has also used the phrase “pro-life is pro-science” multiple times during her commentary throughout the rally. The issue of science is a point of contention between march leaders and non-supporters, including some of the medical field.

One speaker for the rally this year, popular podcaster and outspoken conservative Ben Shapiro, leaned on scientific fact during his speech. He gave a timeline for a baby developing in the womb, with vital functions developing early on in gestation. When Shapiro, an Orthodox Jew, makes pro-life arguments, he tends to steer clear of religion. “I always speak in terms of logic and science. I’ve never cited the Bible,” Shapiro told The Washington Post.

The ongoing debate continues between the majority of health professionals and pro-lifers who define the start of life differently. While those who take a pro-life view believe life starts at conception, Sarah Horvath speaks for 90 percent of the ob/gyns in the United States when she says, “I think that’s a gross exaggeration of an incredibly complex topic. There are many fertilized eggs that never implant, that implant in the wrong place…that become miscarriages, that in fact can become a type of cancer.”

In addition to science, Mancini also brought up human rights and social justice in one of her speeches. She called abortion a great “human rights abuse of today” and a “social injustice.”