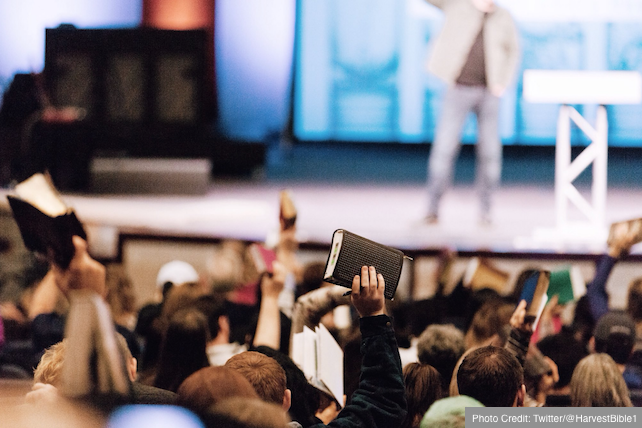 Admitting they had “made mistakes,” members of the elder board spoke to Harvest Bible Chapel’s congregation and promised big changes are coming to the Chicago area megachurch. In the wake of a lengthy and complicated controversy with founding Pastor James MacDonald at the center, a whole lot of people are going to be resigning from positions of leadership—including all five members of the executive committee of the elder board.

Acknowledging the board’s failures in “direction, discipline and response time,” elder William Sperling told the congregation the leadership is “truly sorry and ask for your forgiveness.”

Sperling went on to recap the announcement the elders made last week, when they terminated MacDonald from his position as senior pastor and member of the elder board’s Executive Committee. Saying it had been “without question one of the most difficult weeks in the history of the church,” Sperling said the elders looked at MacDonald’s “old and new” behavior and determined he was “not above reproach,” referencing 1 Timothy 3, where the qualifications for leaders in a church are outlined.

Many have been critical of the elder board for taking so long to fire MacDonald, feeling as if they should have let him go a long time ago—seven years ago, in fact—when the first complaints about him were brought up. Perhaps as a way to address this criticism, Sperling explained the decision wasn’t as easy as it seemed because MacDonald was “occasionally willing to submit to increased accountability” from elders. Even in this announcement, Sperling said he wanted to acknowledge the 30 years MacDonald and his wife, Kathy, had put into the church they founded. However, after their review of MacDonald’s behavior, Sperling said the board came to the conclusion MacDonald displayed a “sinful pattern” of “inappropriate language, anger, domineering behavior.”

Sperling said the entire executive committee of the elder board, which consists of five people, will be resigning over the next few months, as soon as replacements can be found for each of them.

The size of the elder board was mentioned as a potential log jam in the elder’s ability to make “decisions in times of adversity.” The board includes 34 members, a fact which Sperling believes contributes to slow decisions. The implication is in the future, the elder board will be smaller.

The elders and staff of the Naples, Florida, campus will be given the management of their congregation back, Sperling says. It is unclear whether fired pastor John Secrest will be given a chance to return, although last week the Naples campus announced it had hired Russell Taylor to serve as interim pastor until a replacement for Secrest could be found.

Finally, Sperling said the plans for a new campus in Hinsdale, Illinois, will not move forward until the church can straighten out its governance and the way it does ministry.

Of course, it could hardly have qualified as a church meeting without the announcement of a new committee. Sperling said Harvest 2020 is designed to be a small group composed of “congregants, staff, outside professionals and elders” whose job it is to review the church in an effort to improve its oversight, accountability and transparency.

Harvest 2020 will be led by Rick Korte, who has experience as a corporate CEO. Korte will serve as a volunteer. Displaying to the congregation he was grieving with them, Korte spoke tearfully, as “a congregant” first. He said he believed the church could turn around and then pleaded with the crowd to give the committee some time to fix the problems at the church. Korte admitted he had considered leaving himself, but told the group looking for another church is “the easy path.”

More Issues Behind the Scenes

This may all sound right and proper on the surface, but how the congregation responded is another matter. Based on their comments, both Korte and the pastor of Counseling Ministry, Dave Learned, were clearly concerned about people leaving the church.