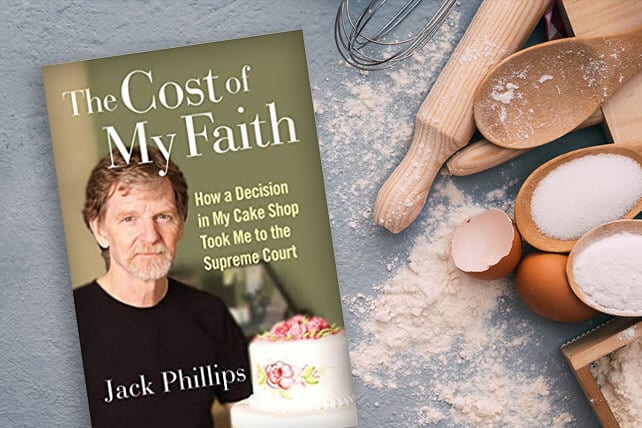 UPDATED April 23, 2021: “Why not just make the cake?” people may wonder after Jack Phillips declined making a wedding cake for a gay couple. And now Phillips is answering that question with his new book: The Cost of My Faith: How a Decision in My Cake Shop Took Me to the Supreme Court.

In his memoir, Phillips explains that there are deeper principles at stake—principles too precious to abandon for the sake of convenience and safety. In his inspiring book, Phillips hopes his story will inspire and strengthen the many who will encounter challenges, however fearsome, to living out their faith.

In a recent interview with Christian Post, Phillips explained that while some may think he had a particular agenda with homosexuals, that is not the case at all. He blames the media that portrays “me as somebody who’s intolerant and somebody who won’t serve different groups of society.”

Phillips says he will not create any cakes he cannot support or be part of because of his faith. Phillips says, “I also don’t create cakes that celebrate Halloween or cakes with alcohol in them or cakes that denigrate other people, including the people who identify as LGBT.”

Embattled baker Jack Phillips has secured another legal victory in his years-long fight to protect his right to refuse service for certain LGBTQ+ celebratory events due to his religious beliefs. On Tuesday, March 5, 2019, the Colorado Civil Rights Commission voted unanimously to drop its second case against Phillips. Phillips, in turn, dropped his federal case against the Commission.

“While [the State of Colorado] finally appears to be getting the message that its anti-religious hostility has no place in our country, the state’s decision to target Jack has cost him more than six-and-a-half years of his life, forcing him to spend that time tied up in legal proceedings,” says Kristen Waggoner, who represented Phillips in court.

You are likely familiar with Phillips because of Colorado’s initial case against him. In 2012, at his Lakewood, Colorado-based Masterpiece Cakeshop, Phillips refused to make a wedding cake for a same-sex couple. The State of Colorado filed charges against Phillips, stating he was in violation of the Colorado Anti-Discrimination Act. When the State of Colorado found him guilty, Phillips appealed, bringing his case all the way to the Supreme Court. In July 2018, the Supreme Court ruled in Phillips’ favor, stating that the Colorado Civil Rights Commission demonstrated hostility to religion.

Phillips wasn’t done with his legal troubles after that ruling, unfortunately. On the very same day the Supreme Court agreed to hear Phillips’ case, June 26, 2017, Autumn Scardina, a man who transitioned to being a woman, asked Phillips to create a cake that would celebrate the seven-year anniversary of the transition. The cake would be blue on the outside and pink on the inside. When Phillips refused, Scardina, who is a family law attorney, filed another complaint with the Colorado Civil Rights Commission.

The Alliance Defending Freedom filed a lawsuit against the Commission and on behalf of Phillips, saying the Commission was violating Phillips’ constitutional right to live out his religious beliefs and his right to due process under the law.

After this incident, Phillips was met with a barrage of requests for cakes that ranged from sexually explicit themes to featuring Satanic symbols to promoting marijuana use.

Waggoner claimed the state was purposefully targeting Phillips. “Neither Jack nor any other creative professionals should be targeted by the government for living consistently with their religious beliefs,” she said. Representatives for Phillips used their time in court for the case dubbed “Masterpiece II” to point to the Commission’s anti-religious bias.

Phillips’ representatives went back to the court record of the original case, in which one person on the Commission, Diann Rice, indicated Phillips’ refusal to back the cake was akin to other forms of discrimination present throughout history.  Rice said “[f]reedom of religion and religion has been used to justify all kinds of discrimination throughout history, whether it be slavery, whether it be the Holocaust.” They also gave evidence that some members currently on the Commission agreed with Rice’s sentiments.

Eventually, both sides agreed “it was not in anyone’s best interest to move forward with these cases,” Colorado Attorney General Phil Weiser said. Weiser also emphasized the state will make decisions based on the core value of “equal justice for all.” However, Weiser’s office did note that if Autumn Scardina wanted to pursue a claim on her own, the decision today would not prohibit her from doing so.

One can only hope that Phillips is done with legal trouble for a while.