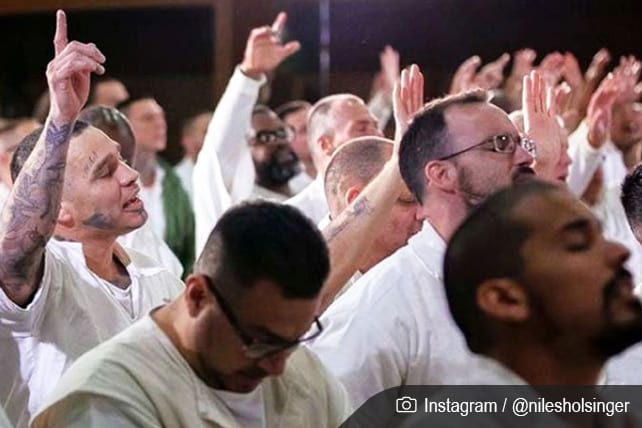 What if giving your life to Christ and being baptized meant facing imminent death? That’s not the case for most of us in the U.S., but it was the reality for five men baptized last week at Coffield Unit, a maximum security men’s prison in the Dallas/Fort Worth area.

“These men are all active gang members,” said Niles Holsinger in a video update on Facebook. “And not only were they making a decision to be baptized and to commit their lives to Christ, they knew that this decision meant, to some of them, certain death.”

Holsinger, who is a pastor with Gateway Church in Dallas/Fort Worth, said that guards led the men, who were shackled hand and foot, into the gym where the baptisms were held and placed them at opposite sides of the room in case of violence. The men are members of two rival gangs. According to Fox News, a guard explained that death is the only way for the men to leave their gangs. The guards did not let go of the men’s arms until the men were in the baptismal tank.

But these men, said Holsinger, “professed the same Lord yesterday, were baptized in the same water, and they walked out together in a line, guards not holding onto their arms any more, because God had done something in their life.”

The men are housed in Administrative Segregation (Ad Seg), that is, solitary confinement. This means they spend 23 hours a day in their cells and are not even allowed to see their friends and family members. Holsinger toured the Ad Seg area of prison prior to the baptism and wrote in an Instagram post, “Most of these men are dangerous, some are considered the most dangerous men in Texas.”

He also said he had a strong sense of spiritual oppression during his tour: “It’s hard to describe what this section of the prison is like. It was the darkest, most oppressively evil place I have ever been. Even the sunlight coming in the windows of the corridors seemed darker.”

But the light of Christ is shining through the darkness. One of the prisoners being baptized told Holsinger, “I have tried it my way my whole life and it’s gotten me here. I want to try it God’s way…we’re going to come out of the water as new men.”

While the whole situation was “mind-blowing” to Holsinger, something else that shocked him was the fact that after the men left the water, they were shaking with fear. “These guys literally know they’re putting their life at risk and they’re doing it anyway,” Holsinger told Fox News. “Never one time in my life have I felt like my decision to follow Christ has put me in danger or discomfort.”

Gateway Church launched a campus in Coffield last fall and made an announcement about it in January. Pastor Stephen Wilson, who is a former inmate, said that launching a church campus in Coffield had been in the works for seven years before it finally happened. The first service was held on November 28, 2018, and over 650 offenders attended it. The Ad Seg inmates could not of course be among them since they are in solitary confinement for almost every hour of the day.

That’s why baptizing men imprisoned under such tight restrictions is so unusual. In fact, it is something that has never been done before in Coffield’s history. But Gateway got the opportunity to baptize the believers in Ad Seg at the invitation of the prison’s warden. The church plans to baptize 14 more Ad Seg inmates in July.

It’s clear that God is doing incredible work at Coffield, both in and outside of solitary confinement. Holsinger wrote in an Instagram post in April, “Last week I met a man who told me God used going to PRISON to set him free.”