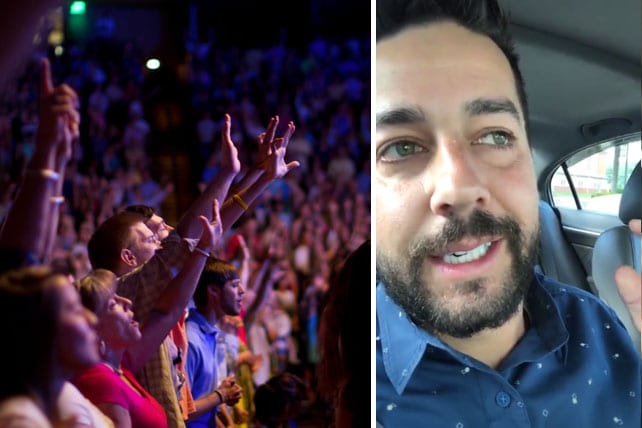 It’s easy for us to point out the faults of consumer Christianity. But John Crist thinks it’s time to stop criticizing churches and church leaders and instead reflect on how we’re contributing to the problem.

Crist, whose father was a pastor, is well-known for poking fun at the church’s quirks and has specifically critiqued churches for being consumer-driven–that is, more concerned with catering to people’s “needs” than with following God.

For example, in his video, “Virtual Reality Church,” Crist depicts Christians so focused on themselves that they don’t even want to deal with the annoyance of leaving their bedrooms to attend a Sunday church service. And they don’t have to because VR church is available to cater to their every whim, customizing services based on people’s denominations, worship style preferences, and whether or not they are introverted.

While this scenario might seem extreme, it’s possibly not too far removed from how some of us approach church. Author David Manner says that a characteristic of modern consumerism is that people are seeking unique experiences. Because of this focus on experience, some people attend church expecting worship to make them feel a certain way. And some worship leaders plan each service to be a worship experience tailored to what appeals to the church members. But Manner says this is misunderstanding what worship is: “an experience is something that is done to us or for us. Worship is something we do.”

Who Is at Fault?

In his Facebook video, Crist says a lot of people tell him about churches that make decisions that seem superficial or extravagant, such as hiring a helicopter to drop candy for kids around Easter or setting up a church stage to look like an NCAA tournament court.

Despite the fact that he often makes light of churches, Crist says, “I think I want to change my stance because…you know why all these churches do all these things? For us.” He says, “I don’t blame the pastors or the church leaders, like all these churches that do these types of things are the biggest churches in America, so we’ve obviously created the demand.”

Crist says he remembers that one time when he was growing up, a family left his dad’s church because there was no children’s drama program. They didn’t care that God was moving or that the church was serving those in poverty. They were entirely focused on the lack of a drama program.

Another point Crist makes is that when people take issue with consumer-driven churches, they often direct some criticism toward pastors for watering down their messages. But when it comes to “light” sermons, Crist says, “You know why they do that? Because if they told you the truth, you would leave.”

What do you think? Do churches bear most of the responsibility for cultivating a consumerist mindset, or do you agree more with John Crist when he says, “I think I’m over the days of blaming the churches or blaming the pastors. It’s time for us to maybe start looking [at] ourselves in the mirror.”

OPINION: Why churches are so consumer driven…

OPINION: Why churches are so consumer driven…