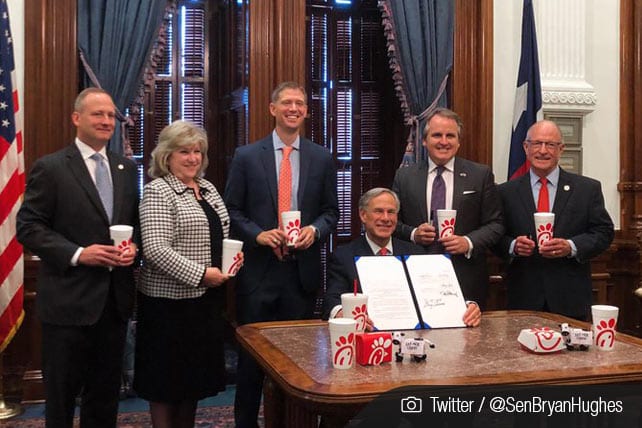 After the city of San Antonio blocked Chick-fil-A from opening a location in the airport due to the company’s leaders’ traditional stance on marriage, a new law in Texas aims to protect the rights of companies and their owners to hold their moral convictions without fear of retaliation. The “Save Chick-fil-A” bill was recently signed into law after an expedited trip through Texas’ legislative process.

“No business should lose a government contract because of their religious beliefs,” Governor Greg Abbott said during a signing ceremony for the bill.

The bill specifically states government entities may not take “adverse action” against an individual based on their “religious beliefs and moral convictions, including beliefs and convictions regarding marriage.”

Abbott put the bill’s purpose in layman’s terms on Monday, when he signed it, explaining “Discrimination is not tolerated in Texas. No business should be discriminated against simply because its owners gave to a church, the Salvation Army, or any other religious organization.” The governor also called the bill’s passing “a victory for religious freedom in Texas.”

While the bill itself (S.B. 1978) does not mention Chick-fil-A by name, it’s nickname makes no secret of the fact that the bill came into being in response to the city of San Antonio blocking the fast-food chain from opening a location inside the airport in March of this year. At the time, city council member Roberto Trevino said the city did “not have room in our public facilities for a business with a legacy of anti-LGBTQ behavior.” In addition to this snub, a Christian college in Texas, Trinity University, also blocked the popular chain from opening a location on its campus. The college cited Chick-fil-A charitable giving as the reason for its hesitation. Some believe the company’s giving to “‘anti-LGBT+’ organizations” implicates them in discrimination.

The bill’s lead author is Bryan Hughes, a Republican who serves in the Texas Senate. Hughes is also the author of S.B. 784, which would prohibit a school district from proving human sexuality instruction unless the school provides parents with “a summary of the basic content” of the curriculum. The bill appears to be stalled. Nevertheless, S.B. 784 and the Chick-fil-A bill have garnered Hughes a lot of support from conservatives in the state.

Abbott made no qualms about the fact that he enjoyed signing the bill into law. The Republican governor posted a video to his Twitter account in which he, Hughes, and several of the lawmakers key in bringing the law to pass are seen with Chick-fil-A cups and sandwiches.

Today I signed the ⁦@ChickfilA⁩ law in Texas.

And, had a great lunch.

No business should be discriminated against simply because its owners donate to a church, the Salvation Army, or other religious organization.

Earlier in the year, when the bill hit his desk, Abbott posted a picture with a cup from the fast-food chain balancing on his computer. The caption reads “What are the odds I’ll sign the Chick-fil-A bill? I’ll let you know after dinner.”

So. What are the odds I’ll sign the Chick-fil-A bill?

I’ll let you know after dinner.