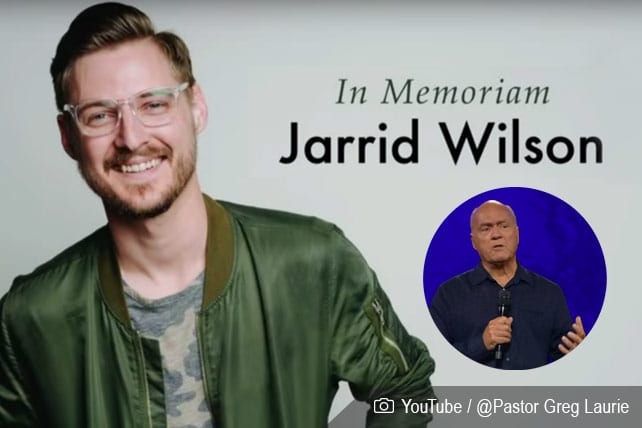 Pastor Greg Laurie of Harvest Christian Fellowship in Riverside, California, delivered a message Thursday at a special service remembering the life of Jarrid Wilson. Wilson was an associate pastor at the church and died by suicide on Monday.

“I’ll be honest with you that this is one of the hardest messages I’ve ever had to write,” Laurie told the congregation, “but it’s one I have to give to you tonight.”

“When I heard the news that Jarrid was gone, I just couldn’t believe it,” Laurie said. When he heard about the tragedy in the early hours of the morning, he screamed, “No!” waking his wife, Cathe.

Laurie described Jarrid as full of excitement and energy, hard-working, and someone who went out of his way to serve others. “He also dealt with very deep depression,” a struggle, said Laurie, that went back to Jarrid’s childhood. Jarrid had also been under the care of a doctor. Part of his legacy is Anthem of Hope, a faith-based organization he founded with his wife, Juli, with the purpose of helping people who are “battling brokenness, depression, anxiety, self-harm, addiction and suicide.”

Laurie said he’d had an opportunity to pray with Juli, who told him that in the midst of her grief she has felt God’s supernatural peace. He took the title of his message, “Hope Gets the Last Word,” from an Instagram post Juli wrote after her husband’s passing.

Laurie said that news of a pastor taking his own life “comes as a shock to people because people think that we as pastors and spiritual leaders are somehow above the pain and struggles of everyday life. We’re supposed to be the ones that have all the answers, but we don’t. At the end of the day, we’re people, just like you.”

But it is still confusing. “We don’t know what was going on in his mind in that night when this event happened,” said Laurie. “He was dealing with challenges, medical challenges and other extenuating circumstances we know nothing of.” Therefore, it’s not our place to pass judgment on Jarrid. Instead, “This is a time for compassion.”

Even though Jarrid died by suicide, Laurie was clear throughout his message that he believes the father of two is in God’s presence:  “Jarrid had put his faith in Christ, and that is why I believe right now, he is in the presence of the Lord in heaven.” People don’t go to heaven because of their own works, but because of Jesus’ sacrifice. “One dark moment in a Christian’s life cannot undo what Christ did for us on the cross,” said Laurie. He acknowledged that suicide is a wrong choice, but emphasized that we all have made wrong choices, and Jesus died for every sinner.

Laurie also observed that people in scripture dealt with severe depression. Job, Jeremiah and Elijah all wanted to die at different times in their lives. This was true, despite their faithfulness to God and despite their great works that include, in the case of the prophet Elijah, calling down fire from heaven and raising someone from the dead.

To people who wonder why Jarrid could not “snap out” of his mental health struggles, Laurie asked if they would have that reaction if Jarrid had been diagnosed with cancer. People don’t survive cancer because it’s powerful and because sometimes treatments don’t work. Mental illness is no different, he said.

If Jarrid Fell, How Can We Stand?

Laurie said that some of the people in Harvest’s young adult group, which Jarrid had pastored, had asked him how they were supposed to overcome suicidal thoughts if Jarrid hadn’t been able to. The answer, Laurie said, is that God will give them strength to persevere and that persevering is what Jarrid would want them to do. He urged his listeners not to trade what they do know for what they don’t know. We don’t know why Jarrid took his life, said Laurie, but we do know that God is good and faithful.

He urged anyone dealing with anxiety to cast their cares on God as 1 Peter 5:7 instructs us, and he encouraged those struggling to reach out to people they trust. “God cares for you,” said Laurie, so ask for help and don’t be ashamed.

Laurie said that when his son Christopher died 11 years ago, he thought his life was ruined: “Getting to sleep at night was the hardest thing imaginable.” One of the ways he and his wife survived that time was by memorizing scripture (Phil. 4:8), something he encouraged his listeners to do. “Hope has the last word,” he said, “Not suicide, not cancer, not depression, not even death. When that hopeless thought comes knocking on the door, reject it.”