The results of a Pew Research survey released today reveal that Christianity in America is continuing on its declining trend. While the study concludes “the U.S. is steadily becoming less Christian and less religiously observant as the share of adults who are not religious grows,” there are a couple of silver linings to look out for within the Protestant church.

The data was collected from political polls conducted by Pew Research, which asked respondents “What is your present religion, if any? Are you Protestant, Roman Catholic, Mormon, Orthodox such as Greek or Russian Orthodox, Jewish, Muslim, Buddhist, Hindu, atheist, agnostic, something else, or nothing in particular?”

Christianity in America Is Declining

The percentage of American adults who describe themselves as Christian has gone from 77 percent to 65 percent, representing a 12 percentage point decrease over the last 10 years. Not only has the number of those who identify as Christians decreased, the number of people who identify as either atheist, agnostic, or “nothing in particular” has risen from 17 percent to 26 percent over the past decade.

Breaking those groups down, the survey revealed that both the Catholic church and Protestant denominations have lost members. Protestants are down to 43 percent of the population (compared to 51 percent in 2009), while Catholics are down to 20 percent (compared to 2009’s 23 percent).

Additionally, within the religiously unaffiliated group (or “nones” as they are called these days), there are three groups: Atheists, agnostics, and “nothing in particular”. Atheists now account for four percent of those surveyed (up from two percent in 2009); agnostics have gone from three percent to five percent over the last ten years; and “nones” have jumped from 12 percent of the population to 17 percent today. 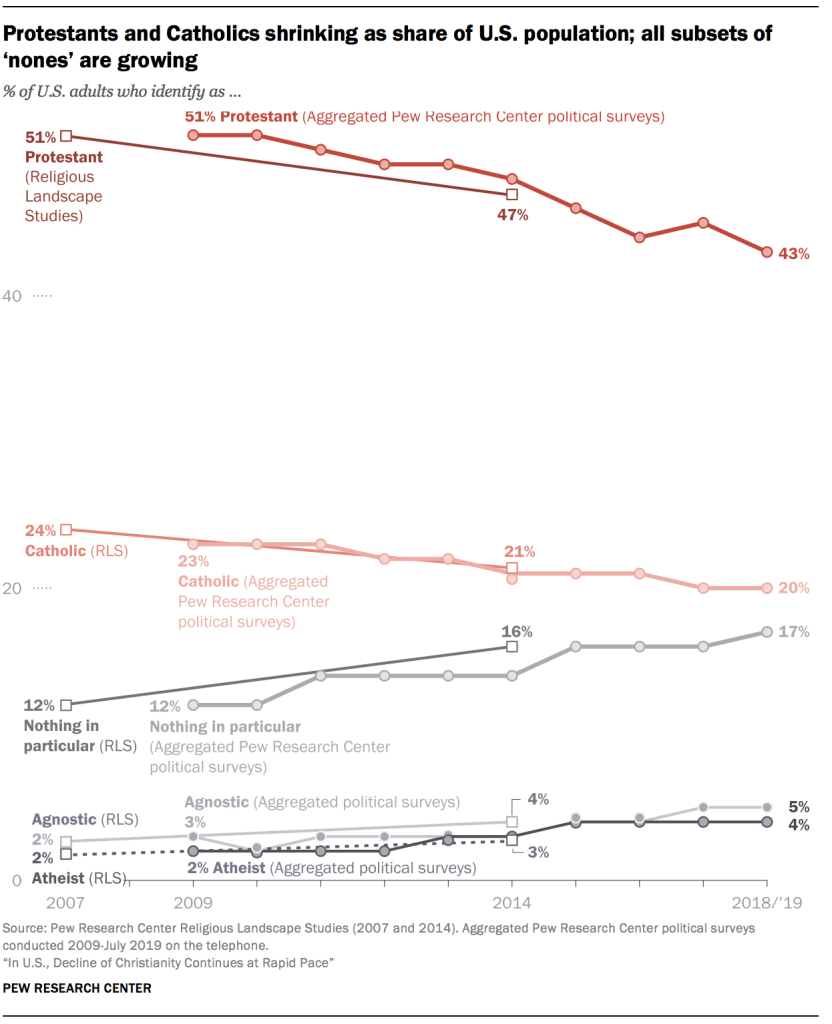 The data also suggest these declines in Christian affiliation are affecting all demographics and regions of the country. From the silent generation to Millennials, college graduates to non-college graduates, Americans are not identifying themselves as Christian as much as they used to. However, two groups of people stand out as losing the most: Millennials and those who identify as Democrat. 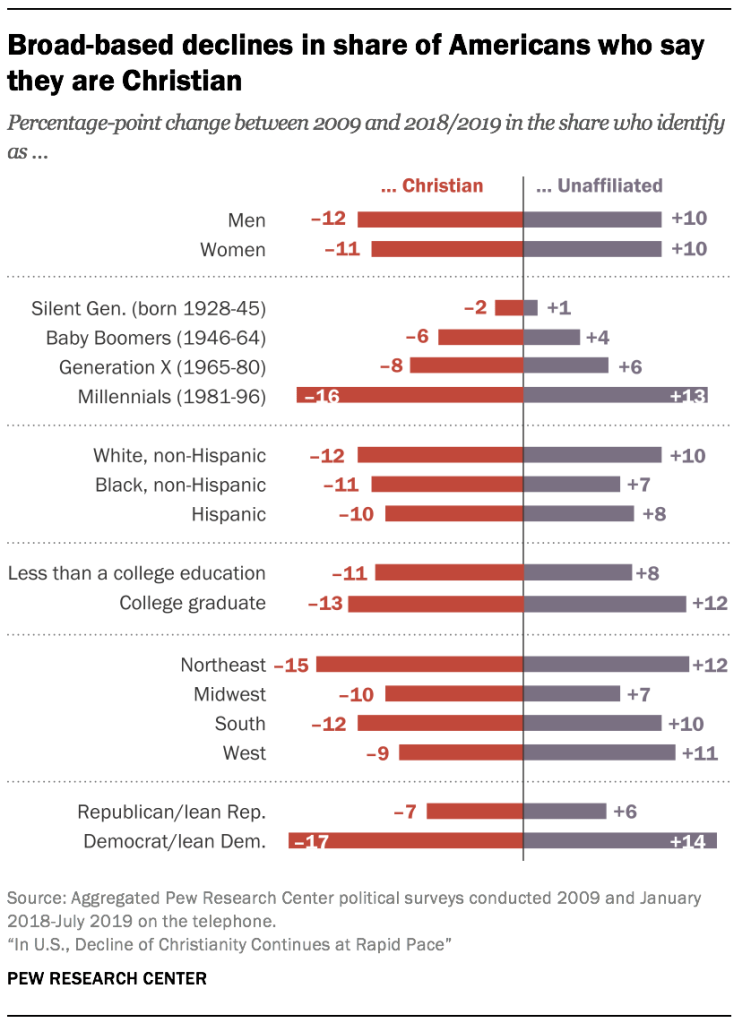 As one drills down into the broad stroke of people represented by the phrase “Protestant”, however, there appears to be a group that is maintaining its share of the Protestant pie (even as the pie itself is getting smaller). While the numbers of the general population suggest that those who belong to evangelical or “born again” circles are declining along with all other Christians, if one just looks at the Protestant population, the share that is evangelical or born again is actually comparable to the 2009 percentage. 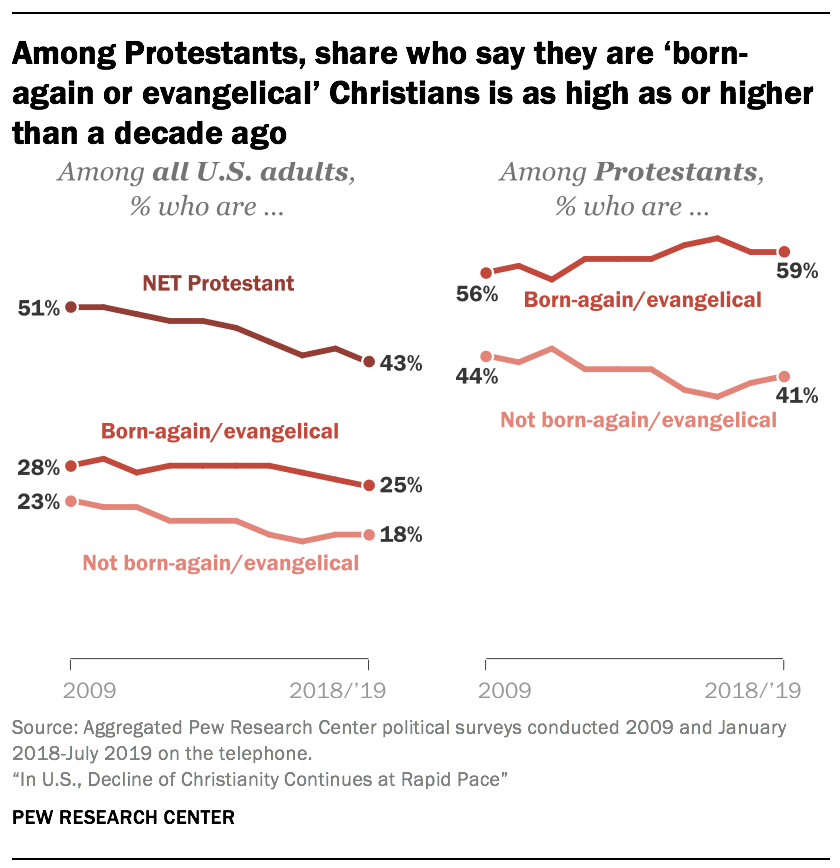 In 2009, regular worship attenders (those who attend religious services at least once or twice a month) outnumbered those who attend services only occasionally or not at all by a 52 percent-to-47 percent margin. Today those figures are reversed; more Americans now say they attend religious services a few times a year or less (54 percent) than say they attend at least monthly (45 percent). 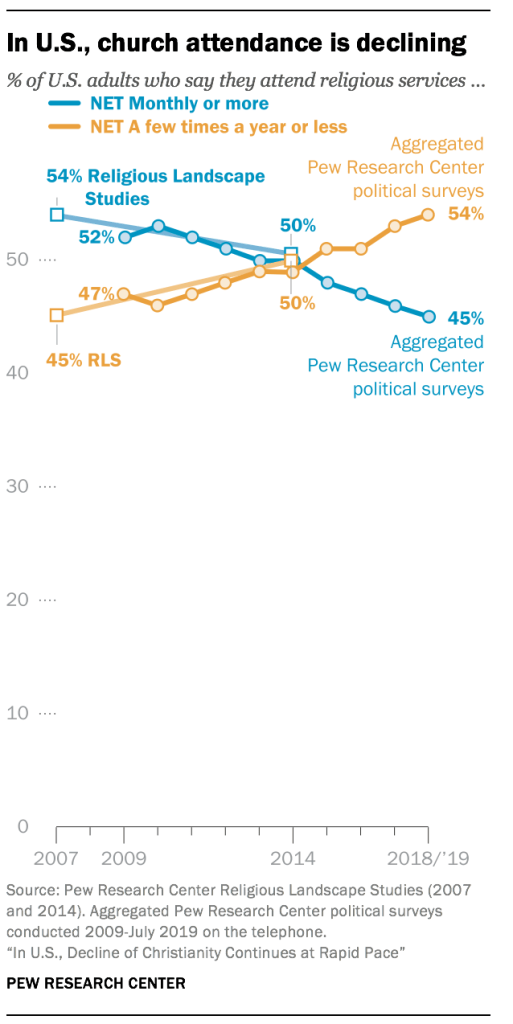 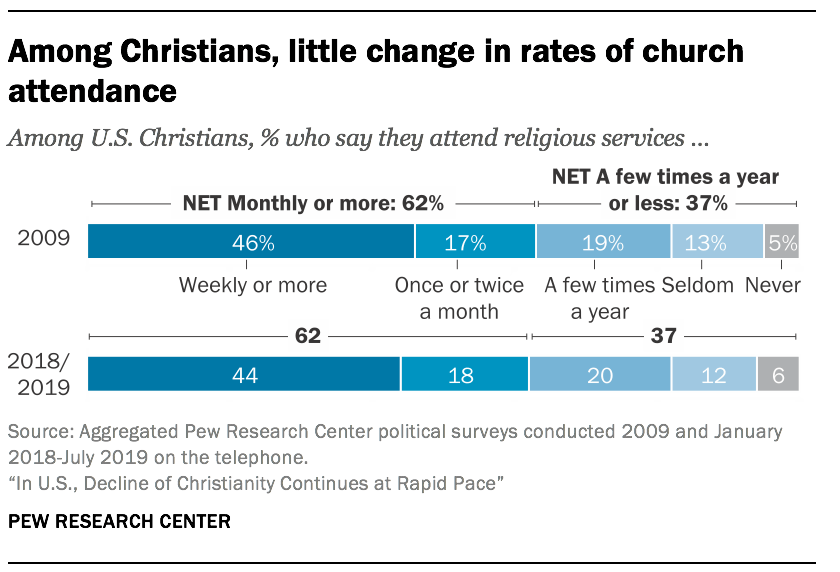 Differences in How Previous Surveys Were Conducted

Pew has had to use alternate methods to gather current data compared to how it conducted its Religious Landscape Studies in 2007 and 2014. For those years, Pew spoke to over 35,000 respondents on the telephone and asked “dozens of detailed questions about their religious identities, beliefs, and practices.”

Chinese Churches’ Right to Reopen Being Held for Ransom