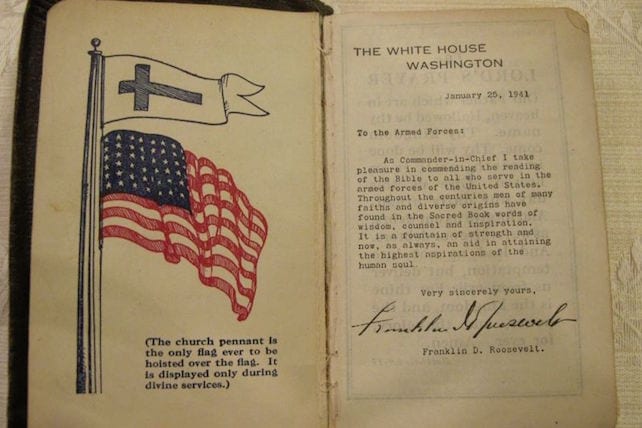 In Wisconsin this week, lawmakers are expected to pass a resolution officially recognizing the week of November 24 as National Bible Week. The resolution credits Bible-reading with giving “great comfort and encouragement” to many people and contributing to the “spiritual, moral, and social fiber of our citizenry.” It also notes that America “continues to observe Sunday to Sunday of the week of Thanksgiving as National Bible Week.”

The resolution, which acts more as a symbolic statement than an official law, draws attention to an observance that dates back to 1941. Julaine Appling, president of Wisconsin Family Action, says the designation is an appropriate way to recognize Christianity’s influence on America as well as on the Thanksgiving holiday.

But the Freedom From Religion Foundation (FFRF), based in Madison, Wisconsin, feels differently, calling the state’s National Bible Week resolution “highly inappropriate.” In a statement, FFRF says, “It’s a fundamental American principle that the government may not take sides over religion.” The group adds, “Unfortunately, over the years theocrats have opportunistically picked the period around Thanksgiving as a time to demand the government adopt religious resolutions.”

The History of National Bible Week

As war spread throughout Europe in 1940, some concerned American business leaders formed the Laymen’s Bible Association, which became the National Bible Association. Their goal was to remind Americans to trust in God and read the Bible during a time of global uncertainty.

President Franklin D. Roosevelt invited some of these leaders to the White House to mark the first National Bible Week, and NBC Radio invited them to read the Bible all day on the radio. The chosen date for the reading turned out to be Sunday, December 7, 1941—when the Japanese attacked the United States at Pearl Harbor.

Instead of canceling the on-air Bible-reading plans, NBC asked the Bible association’s leaders if they would read Scripture in between the network’s news reports. Throughout America that day, radio stations relied on NBC’s coverage about Pearl Harbor and FDR’s declaration of war. So millions of people ended up hearing the good news of God’s Word on one of the country’s darkest days.

From that turbulent start, every president since FDR has declared the week of Thanksgiving to be National Bible Week. This year’s 78th commemoration is sponsored by the National Bible Association and the U.S. Catholic Council of Bishops. For Catholics, the week also commemorates the anniversary of the Second Vatican Council document Dei Verbum (Dogmatic Constitution on Divine Revelation).

Throughout the United States, governors and mayors also make proclamations about National Bible Week. And in Washington, D.C., lawmakers read celebratory speeches about Scripture into the Congressional Record. The National Bible Association, which consists of members of the Protestant, Catholic, and Jewish faith traditions, also holds an annual awards ceremony in New York City.

The first day of National Bible Week—which occurs this year on Sunday, November 24—is known as the International Day of the Bible. This year marks the 10th observance of this global celebration. People throughout the world are encouraged to pause at noon local time to read, pray, or sing Scripture. Event sponsors include the American Bible Society, Bible Gateway, Museum of the Bible, Scripture Union, the U.S. Catholic Council of Bishops, and YouVersion the Bible App.

Ambassador Gilbert Robinson (ret.), chairman emeritus of the National Bible Association, says the annual observance of National Bible Week is the best kind of civic endorsement: “to be kind to your fellow man and follow love wherever.” People aren’t being forced to encourage Bible-reading, he notes, adding that doing so is certainly “a positive in civic life.”

As part of its outreach efforts, the National Bible Association uses media campaigns to “encourage reading of the Bible…whatever version.” It’s also aiming to print and distribute 20,000 copies of Bible Wisdom for Better Living, a new book by U.S. Senate Chaplain Barry Black. The association believes Black’s book will be especially beneficial for military members, so it’s seeking donations to “Help Us Combat #PTSD and #Suicide.”

The Bible is the biggest-selling book in history, with an estimated 5 billion to 6 billion copies sold. A wave of Bible-related bills has been making its way through America lately, with several states passing laws that allow Bible-literacy electives in public schools.