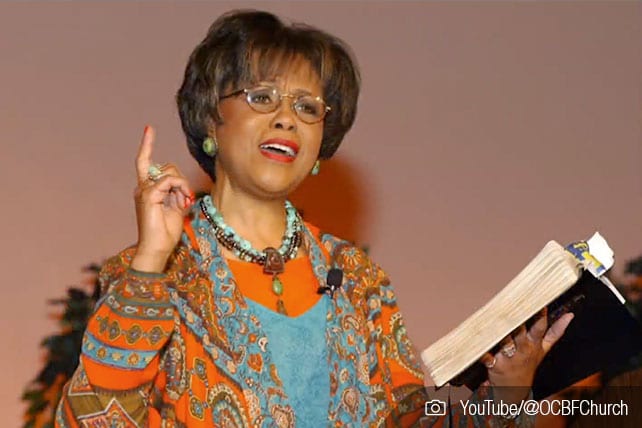 On Monday, January 6, 2020, Lois Evans, wife of Tony Evans, was laid to rest. The impact of Lois’ work as a mother, pastor’s wife, and co-founder of the Urban Alternative came up repeatedly throughout the four-hour-long service. The somber service included plenty of levity and celebration, including a couple of running jokes sprinkled throughout the touching tributes.

“Everyone who knew Lois knew that the Word was her first love. Her husband was her second. Her family was her priority and her church was her assignment,” Devi Titus, a friend of Lois’, said in tribute.

Kirk Franklin led a musical prelude to the funeral, which was held at Oak Cliff Bible Fellowship in Dallas, Texas. Lead Associate Pastor Bobby Gibson officiated the service, which the Rev. Martin E. Hawkin called a “celebration of a life well-lived.”

Pastors John and Trina Jenkins kicked off a series of comments from couples in ministry who have been friends with Lois and Tony Evans for several years. Here is where the first running joke of the funeral debuted. John mentioned that he and Tony bonded while their wives went shopping and spent “all their money.”

Sonny and Christie Acho remembered Lois for “her grace in handling ministry difficulties.” Sonny talked about the numerous deaths the Evans family has faced recently. So many, in fact, that Sonny thinks Tony should change his name to “Dr. Through It All Evans.”

Jim Cymbala from Brooklyn Tabernacle spoke at the service while his wife, Carol, was not able to attend due to illness. “Lois had this wonderful trait, this wonderful grace from God which was she was humble,” Cymbala said. “Wasn’t she about the kindest person who walked on the face of this earth?” he asked, to which the crowd applauded enthusiastically.

The City of Dallas also acknowledged Lois’ passing, noting her many contributions to the Christian community and greater community of Dallas, Texas. The resolution, which was read by a member of Oak Cliff Bible Fellowship, was signed by Dallas Mayor Eric Johnson.

Several personal friends of Lois spoke about the impact her ministry to pastor’s wives had on them and the communities of faith which they represent. Lois held annual First Ladies Conferences for pastor’s wives from 1999-2011.

Titus said Lois had a “unique calling to women, and especially pastor’s wives.” She “caused them to love their homes, their husbands, and their families.”

Rhoda Gonzales said Lois made an “indelible” mark on Gonzales’ life. She encouraged pastor’s wives to create fellowships in their cities, Gonzales explained. She invited pastors’ wives in attendance at the funeral to meet for a brief reception after the service where they could connect and network.

Dr. Paul Cannings spoke on behalf of Lois’ siblings, who stood holding hands behind Cannings as he spoke from the podium. Cannings attributed Lois’ character to their parents. “Who you are honoring today is the legacy that was placed into the heart of our sisters is our mom and dad.” Cannings said their mother would gather all the kids together at 6:00 am every morning to teach them the word of God. He also remembered Lois as a person who loved to sing. Again the running joke about Lois loving to shop and dress well came up, as he recalled her always being dressed well for every occasion. Cannings worked under Lois as a national director of Urban Alternative. He concluded his short speech by saying, “We have to stop saying that people die. We have to say that He lives.”