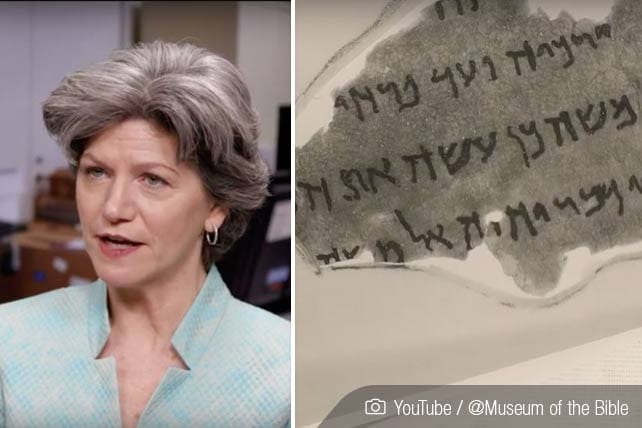 A team of independent investigators has found that the 16 alleged Dead Sea Scroll fragments at the Museum of the Bible in Washington D.C. are forgeries. On March 13, Art Fraud Insights released a report over 200 pages long that it completed at the request of the Bible museum. The report detailed the inconsistencies found by the Art Fraud Insights team, which was headed by company founder and director Colette Loll.

“After an exhaustive review of all the imaging and scientific analysis results, it is the unanimous conclusion of the Advisory Team that none of the textual fragments in the Museum of the Bible’s Dead Sea Scroll collection are authentic,” said Loll in her executive summary of the report. “Moreover, each exhibits characteristics that suggest they are deliberate forgeries created in the twentieth century with the intent to mimic authentic Dead Sea Scroll fragments.”

The Museum of the Bible opened to the public in 2017 in Washington D.C. and describes itself as “an innovative, global, educational institution whose purpose is to invite all people to engage with the Bible.”

Hobby Lobby president Steve Green founded the museum and is also one of its main funders. Between 2009 and 2014, reports National Geographic, Green purchased many biblical artifacts and manuscripts, including 16 out of an estimated 70 alleged Dead Sea Scroll fragments that appeared on the antiquities market after 2002. The forgeries initially fooled biblical scholars, some of whom published a book on some of the fragments the museum bought. However, beginning in 2016, certain experts began to express doubt about the authenticity of the fragments, which had not been subjected to a detailed evaluation at that point.

In April 2017, the museum requested that experts in Germany test five of the 16 fragments. Those experts concluded that the five fragments showed enough inconsistencies to call their authenticity into question, and the museum pulled them from display in October 2018. The museum then sought help from Loll’s company in order to determine whether or not any of the fragments were authentic.

“To that end,” wrote Loll in her executive summary about her team’s findings, “comprehensive imaging and scientific analysis were conducted on the collection between May and October 2019.” Loll’s team was comprised of scientists, conservators and imaging experts, and she said, “We now know that there was much to be gained by studying the fragments under different wavelengths of light, under high magnification, identifying the materials from which they were made, and analyzing the materials deposited on their surfaces.”

Among the inconsistencies Loll’s team discovered was that the fragments were made of leather instead of the “tanned and untanned parchment” of the original scrolls. The team found evidence that modern writing had been applied to the fragments and that the forgers had applied animal glue to their surfaces to “simulate the gelatinization” of the originals. Loll noted, “In all of the fragments that contained writing, we observed examples where modern ink was applied atop preexisting surface deposits and across cracks and areas of delamination already present on the repurposed material.” She described additional techniques the forgers used to create the fragments and said, “It is our opinion that all of these methods were utilized with an express intent to deceive.”

Even though Green purchased the fragments from four different people, the fact they have similar characteristics, says National Geographic, “strongly suggests that the forged fragments share a common source. However, the identity of the forger or forgers remains unknown.” The findings of Loll’s team do not mean that the people who sold the fragments to Green necessarily knew they were fakes, and the report does not call into question the genuineness of the original Dead Sea Scroll fragments.

Loll concluded her summary of the team’s findings by noting that one result of the project was that she and her team have developed a new procedure for determining whether or not ancient texts are authentic. “The extensive research sponsored by the Museum of the Bible,” she said, “has resulted in the creation of a rigorous and reproducible protocol for the scientific interrogation of questioned ancient textual artifacts.”

The Museum of the Bible has had other difficulties with its artifacts in the past. In 2017, the Green family was fined for buying stolen artifacts from Iraq. In 2018, it was discovered the museum had a stolen medieval manuscript in its possession, and in October 2019, the Bible museum again landed in hot water for unwittingly having 11 stolen biblical artifacts.

Loll emphasized, however, that when the museum requested her to conduct a study, they gave her the full independence she asked for, including allowing her to publicly publish the results. She said “I’ve never worked with a museum that was so up-front.” The Bible museum’s leadership told National Geographic they hoped their experience would be helpful to Dead Sea Scroll scholars, and they are also re-evaluating the origin of everything in their collection.

Despite the fact he believes the museum has made some grave mistakes in the past, Semitic text specialist Christopher Rollston says its leaders have shown integrity in how they have tried to fix those mistakes. “If there’s any theme that’s present in the Bible, it’s the theme of forgiveness and the possibility of redemption, after someone finally comes clean,” said Rollston. “There’s true penitence there.”