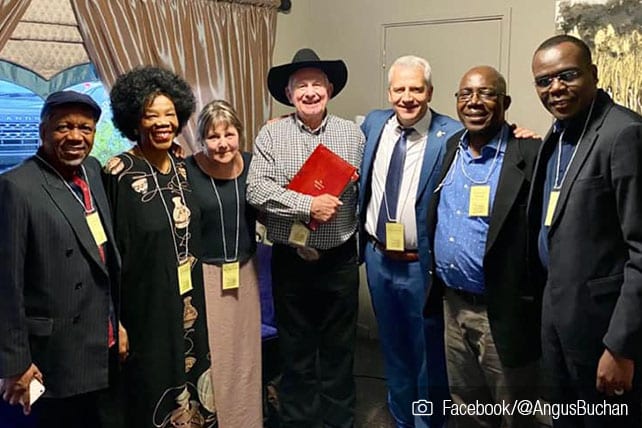 An international prayer gathering held at a church in Bloemfontein, South Africa is responsible for the spread of several cases of COVID-19 within that country’s Free State, the South African Health Minister, Dr. Zweli Mkhize, announced last week. Among those attendees infected by the virus are well-known evangelist Angus Buchan, two politicians, and an elderly pastor who has since died from COVID-19.

“The majority of the 61 patients [in the Free State] come from the church meeting,” Mkhize told reporters on Sunday. Additionally, the Health Minister indicated “Church leaders who attended the meeting, put their congregation in contact with the virus.”

The elderly pastor who died, John Hlangeni, was 85 and served Global Reconciliation Church in Bloemfontein.

The gathering, Jerusalem Prayer Breakfast (JPB) was held March 9-11 at the Divine Restoration Ministries in Bloemfontein. According to Divine Restoration, 270 people were in attendance at the event. Angus Buchan was a guest speaker.

Five international visitors, two from the United States, one from Fance, and two from Israel, are believed to be the carriers of the virus, which then spread to several of the attendees. According to Pastor Elisée Yao, the international guests were not showing symptoms during the prayer event. All five had been screened at the airport upon entering South Africa. In fact, the only reason they were tested on March 16th was because of the President’s order to have all international visitors tested before leaving the country. When those results came back positive for all five visitors, they entered isolation.

The Department of Health indicated Divine Restoration shared a contact list for the event with them and church leaders have encouraged church members to come forward for screening. “Surely, we wouldn’t have reached the high numbers of screening and testing that we reached had we done this on our own and without their cooperation,” a spokesperson for the Department of Health wrote.

As of the writing of this article, the Free State has 72 confirmed cases of COVID-19. According to City Press News, over 300 Divine Restoration members have been tested as of Sunday.

Politicians Present at the Event

There were two politicians present at the prayer gathering, the Reverend Kenneth Meshoe, leader of the African Christian Democratic Party (ACDP) and Steve Swart, an ACDP member of Parliament. These two have since tested positive for Covid-19, and Meshoe has been in contact with other high-ranking South African politicians, including President Cyril Ramaphosa. President Ramaphosa has since been tested for the virus, and has tested negative, while other politicians who have recently come into contact with Meshoe are undergoing testing.

Angus Buchan and his wife, Jill, traveled home to their farm in Greytown in Kwa-Zulu Natal province. According to the couple’s daughter, they have been self-isolating. The evangelist, who is known for holding massive revival gatherings and prayer events, posted an update on March 26th to his Instagram account that has since been deleted. The Times Live was able to capture some of the words that were shared: