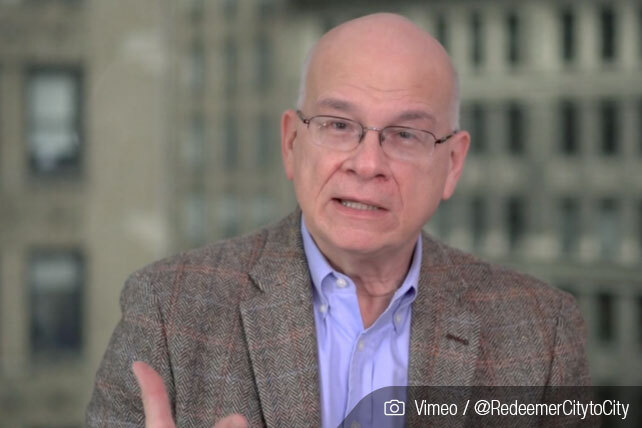 Timothy Keller knows how to pastor diverse groups of people. He’s pastored a church in the heart of liberal Manhattan and a church in Hopewell, Virginia, a blue collar, southern town now favorable to President Trump, as he describes it. Keller has over 50 years of ministry experience, including experience planting churches and co-founding the Redeemer City to City church planting movement. You could say Keller has experience with a wide breadth of the American evangelical church. And while he describes himself as a political “amateur”, Keller observes a problem of political polarization that is plaguing the church right now.

“I would say our biggest problem right now is political disunity, not doctrinal,” Keller told us in a recent interview on the ChurchLeaders podcast. “It’s pretty remarkable. Nobody’s arguing about baptism or tongues or things like that anymore. They’re arguing about politics.”

We’re not the only ones Keller has spoken to about this crisis of political polarization in the evangelical church. In a 2018 interview with Maina Mwaura, Keller expressed his concern over some Christians growing more radicalized on both sides of the political aisle—but most noticeably the growing trend toward nationalism. He also described political polarization as one of the three main challenges the church is currently facing in an interview on the Faith Angle Forum podcast. Keller also recently published a book, Uncommon Ground, toward the end of helping Christians live faithfully in an increasingly pluralistic world.

How Did the Church Get Here?

Keller believes a shift has taken place in the last handful of decades among the liberal left that has alienated the blue collar workers they used to champion. “When the left was mainly about economic issues—it was mainly about lifting up the poor and the working class and unions and that sort of thing—there wasn’t as much of a bifurcation, I think, between your average real blue collar person and the intelligentsia who was a left-wing person.” However, Keller explains in his interview with Faith Angle Forum, “when the left moved into saying, ‘if you’re an Orthodox Jew or Muslim or Catholic or evangelical Christian, your social values are stupid,’” they crossed a line they have yet to recover from, Keller speculates.

In essence, Keller believes the left moved away from their platform based on economic issues and move toward “lifting up sexual issues and sex and gender and that sort of thing.” As blue collar people tend to be religious, Keller points out, this alienated many of them and contributed to the rift we are currently witnessing between the left and some religious people.

Another factor Keller mentions in this whole political polarization crisis is the media. He recalls pastoring in Hopewell during the 1970s and 80s when his congregants only had access to a few sources for national news and one Christian radio station that aired a lot of Bible exposition content. A pastor during this time, he explained, had more influence over what his or her congregants believed about social and political issues like sex, gender, and race.

Now, however, Keller says it’s “crazy, utterly crazy” how many different voices your average church-goer will be exposed to on these topics. Keller admits he’s not sure how the church should adapt to the deluge of information and opinions most people are exposed to on a daily basis. And the voices chiming in about these sensitive issues aren’t just coming from secular sources, either. Whereas Christian radio in the 70s and 80s concerned itself with Bible exposition mainly, today it’s a different story. Keller says he noticed a change in the Reagan era where Christian radio started to talk more about political issues.

What Is This Political Polarization Doing to the Church?

Keller believes political polarizations are undermining the church’s ability both to form people and to reach people. It is, in short, a “crisis” for the church. Again, Keller believes Christians are ending up in ditches on both the right and left sides of the narrow road we’ve instructed to walk. In the interview with ChurchLeaders, Keller painted the picture this way:

When I went to [Hopewell], I realized the Bible doesn’t just talk about sex and gender, it also talks about race and poverty, racial justice and economic justice, and when I got into conservative Christian circles down there, I found out that they were all combative about sex and gender but they basically looked the other way when it came to issues of racism and poverty and they said ‘that’s not our job–our job is to save souls.’ And that’s not what the Bible says…When we look at what the Bible says, we should be concerned about racial justice and poverty and we should be against same-sex marriage and we should be against abortion…Here’s Christians who are being sucked into either a secular liberal or a secular conservative direction.

In places like Washington D.C. and New York City, for instance, Keller notices younger evangelicals are moving toward sources of information like MSNBC whereas evangelicals in other parts of the country rely more on Fox News. Both of these sources, Keller points out, are secular. The implication that Keller is making here is that there is a “blue evangelicalism and a red evangelicalism coming up” that represents a crisis of disunity in the church.

And while some may be quick to point fingers across political aisles and blame the “other side” for our current polarization, Keller warns us not to be so quick to point. There are “conservative operatives doing everything they can to alienate evangelicals from the liberals. And liberal operatives doing everything they can to alienate the rest of the country from evangelicals. We’re constantly being pummeled over certain things,” Keller explains.

In fact, a book Keller is reading at the moment points out that American evangelicals represent a significant voting bloc not seen in other English-speaking countries like Canada, Australia, or the U.K. and therefore find themselves the object of an unfortunate tug-of-war. The book is called The Politics of Evangelical Identity by Baylor University Professor Lydia Bean and compares two American churches (a Baptist and Pentecostal church) in Buffalo, New York, with two Canadian churches (also Baptist and Pentecostal) in Hamilton, Ontario. While the four churches are geographically very close to one another and share virtually the same theology and “conservative moral attitudes”, they differ significantly when it comes to politics. Keller explains this is because in Canada, evangelicals represent a relatively small voting bloc and implies they are not targeted by politically motivated people in the same way American evangelicals are.