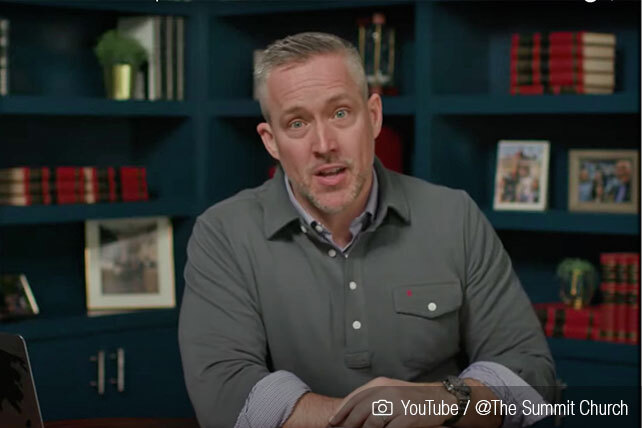 Is the coronavirus a result of God’s wrath against individuals or nations? Is it ever valid to see the virus as a judgment from God? On his latest Ask Me Anything podcast, Pastor J.D. Greear not only explained why it is dangerous to try to answer these questions but also said there is a far more productive question we should be asking.

“I want to say this very, very clearly,” said Greear. Trying to determine if a circumstance is a judgment from God “is a level of interpretation about an event that the Bible does not encourage us to exercise in specific situations. In fact, more often than not, in the life of Jesus himself, he’s actually pointing people away from that conclusion.”

Does the Coronavirus Have Anything to Do with God’s Wrath?

“Let’s just state the theological obvious,” said Greear. “All of misery, all devastation, it comes as a result of the Curse, and it’s part of God’s generalized curse on sin.”

When God created the earth, he made it good, and there were no diseases. But when Adam and Eve sinned, God cursed the world he had made. So in one sense, sin is tied to the coronavirus or any evil or suffering any one of us experiences. That’s worth acknowledging, but what about the question of whether God ever uses physical suffering to judge people for specific sins? The first part of Greear’s answer might surprise you.

“Clearly, even in the New Testament, the Bible teaches that yes, there are specific times that God judges somebody physically because of a sin,” said the pastor. One example of this is in Acts 12 when a group of people compare King Herod to God and Herod accepts this praise instead of giving God the glory. The writer tells us that as a consequence, an angel of the Lord strikes Herod so that he dies from being eaten by worms. In John 5, when Jesus heals an invalid, he warns the man to stop sinning so that “nothing worse” happens to him. When writing to the Corinthian church on how to properly observe Communion, the Apostle Paul tells believers that some of them are sick and have even died because they are taking the Lord’s supper in “an unworthy manner.”

But assuming that we can figure out when God is judging someone for a specific sin is dangerous, said Greear, and Jesus himself discouraged that way of thinking. For example, in John 9 Jesus’ disciples ask him whether a man who was born blind is blind because of his own sin or that of his parents. Jesus responds that the man’s blindness is not because of the man’s sin or his parents’ sin, but rather, “this happened so that the works of God might be displayed in him.”

Job is perhaps the ultimate example the Bible provides that shows us extreme suffering is not necessarily a consequence of sin. While Greear does not fault Job’s friends for thinking he might need to repent of some sin, the pastor does think they were wrong for concluding that sin had to be the reason for Job’s suffering.

It is simply not for us to know whether God is judging people for their wrongdoings. Greear added, “I think that’s especially problematic to do right now with the coronavirus.” The reason why is that some communities, such as communities of color, are suffering more than others because of the virus. “Sometimes that’s because of unjust situations that they’ve been put in,” said the pastor. “So then to turn around and say, ‘Now you’re suffering more because of your sin,’ when it’s actually because of the sins of others that they’re suffering, that would seem especially grievous.”

“I would just be very, very cautious in this,” said Greear. And beyond simply being cautious in our discussions about how God is judging others, it is much more helpful to ask how God is using the coronavirus and other challenges in our own lives. It could be that God is trying to get our attention about something we need to change.

In Luke 13:1-6, Jesus addresses a situation where 18 people died because a tower fell on them. Instead of saying their sin was to blame for that misfortune, Jesus says, “unless you repent, you too will all perish.” This response, said Greear, is “surprising and jolting.” Jesus is directing us to consider the impact of our own sin instead of worrying about how God’s wrath is impacting other people for their sins. This does not necessarily mean that if we are suffering, it is because we are experiencing God’s wrath for something specific. Greear said that if God is trying to get his attention about something, “like a good heavenly Father, God will let me know quickly because he’s not going to hide that from me.” But if God does not reveal anything particular that Greear needs to change, the pastor then assumes he is going through a situation similar to Job’s.

Greear concluded, “So when I look at something like the coronavirus, my assumption is not supposed to be, ‘What was God doing in that person’s life who was suffering from it?’ The question is, ‘What is God trying to say to me?’”