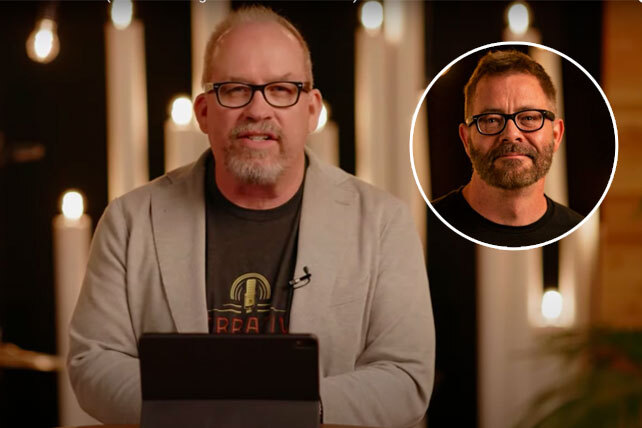 This past Sunday, Seacoast Church in South Carolina posted a video in remembrance of Pastor Darrin Patrick, who died suddenly on May 7. Seacoast’s founding pastor, Greg Surratt, gave the message, during which he shared part of Patrick’s story and explored what the Bible says about how to respond when we lose a friend.

Greg Surratt: Our Hearts Are Broken

“A week ago Thursday, we lost a friend,” said Surratt. Surratt first met Darrin Patrick at a gathering of church planting organizations. Patrick was an impressive communicator who had written books and was a featured speaker at major conferences worldwide. The two agreed to exchange numbers, and Surratt was surprised when Patrick asked, “Are you going to answer me when I call?”

At first, Surratt thought this was an arrogant question. “But later,” he said, “I found that it was a sincere question of an orphan looking for a spiritual father.” The pastors kept up a friendship throughout the years and spoke at each other’s churches. Patrick was pastoring at The Journey Church in St. Louis, Missouri, during that time. Then about four years ago, he called Surratt with sobering news. “He was in trouble,” said Surratt. He had made some poor decisions that, taken as a whole, were “very troubling.”

Journey ended up letting Patrick go, although Surratt made it clear that the church was very supportive of Patrick through that experience. Then, said Surratt, Patrick “entered into a deeply flawed recovery process of which I was a part…I thought it was destructive at times.” Surratt said he talked to Patrick about his concerns, but the pastor responded, “I want to stick it out.”

“The landscape was littered at that point with leaders who fell and chose not to submit to a process of restoration,” said Surratt. “And he didn’t want that.”

Patrick slowly recovered. Surratt eventually asked him to share his story with Seacoast and then with more people, including other pastors. “Pastors just gravitated toward Darrin,” said Surratt, “especially those who were hurting.” Darrin Patrick came on staff with Seacoast, and he and Surratt started The Pastors Collective to give church leaders a safe place to process their challenges. Said Surratt, “We dreamed of helping leaders lead in a healthy way, and I believe we were making a difference in many, many lives.”

Then Surratt got a call from Patrick’s wife with the news that he was gone. Patrick was out shooting and his gun went off and took his life. Was it intentional? “I’m going to be honest,” said Surratt. “We don’t know yet.”

“The bottom line is that our friend is gone and our hearts are broken,” he said. “The circumstances are complicated. There’s an ongoing investigation. We may know soon, or we may never know. We’re learning to trust God. And we will be honest with you in the process.”

We can learn a lot, said Surratt, about how to respond when we lose a friend by looking at how Jesus responds to the death of his friend Lazarus in John 11. Jesus deliberately stays away when his good friend is sick and only comes after Lazarus dies because the plan is for God to be glorified through Lazarus’s resurrection. Yet when Jesus arrives and sees everyone mourning, he grieves with them. Said Surratt, “You need to know that when you hurt, God weeps.” Even though Jesus knew “the end of the story,” that he was going to raise Lazarus from the dead, he still wept over death and the pain it caused.