After Drew Brees openly disagreed with anyone disrespecting our flag, the NFL star issued an apology for what many considered racially “insensitive” comments.

“I will never agree with anybody disrespecting the flag of the United States of America, or our country,” said Brees, in part. “In many cases, it brings me to tears thinking about all that has been sacrificed – and not just those in the military, but for that matter, those throughout the Civil Rights movements of the 60s, and all that has been endured by so many people up until this point.”

“Is everything right with our country right now? No, it’s not,” the New Orleans Saints QB continued. “We still have a long way to go. But I think what you do by standing there and showing respect to the flag with your hand over your heart is it shows unity. It shows that we are all in this together, we can all do better, and that we are all part of the solution.”

Highlight: @readdanwrite asks @drewbrees what the star NFL quarterback thinks about "players kneeling again when the NFL season starts."@drewbrees: “I will never agree with anybody disrespecting the flag of the United States of America or our country.”

The quarterback received massive backlash for his comments made in a brief interview posted on Twitter that has now been viewed nearly 12 million times. Many of those comments even came from fellow NFL players.

Brees quickly apologized, and even publicly replied to Donald Trump who called him out for backing down.

“We can no longer use the flag to turn people away or distract them from the real issues that face our black communities,” Brees wrote to Trump on Instagram. “We did this back in 2017, and regretfully I brought it back with my comments this week. We must stop talking about the flag and shift our attention to the real issues of systemic racial injustice, economic oppression, police brutality, and judicial & prison reform.”

Just one day after her husband publicly apologized, Drew Brees’ wife, Brittany, issued her own apology on Instagram, emphasizing that ‘we are the problem.’

“WE ARE THE PROBLEM. I write this with tears in my eyes and I hope you all hear our hearts,” Brittany wrote on an Instagram post shared on the “Brees Dream Foundation” page.

“I have read these quotes and scripture 1000 times and every time I read it and the words sink into my heart. I think yes this is what it’s all about,” she explained, referencing a picture featuring powerful quotes from Martin Luther King Jr. and Micah 6:8. 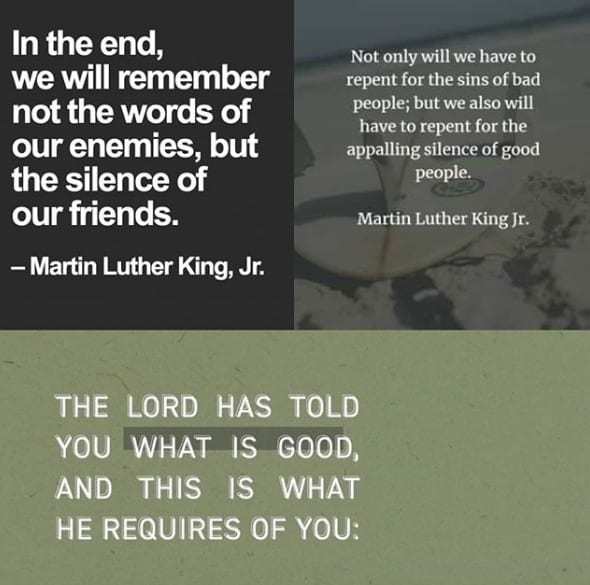 The scripture verse in full, reads “No, O people, the Lord has told you what is good, and this is what he requires of you: to do what is right, to love mercy, and to walk humbly with your God.”

Brittany vulnerably shared the sobering realization she came to after the couple started to get death threats for her husband’s comments:

Only until the last few days, until we experienced the death threats we experienced the hate, did I realize that these words were speaking directly to us… how could anyone who knows us or has had interactions with us think that Drew or I have a racist bone in our body? But that’s the whole point. Somehow we as white America, we can feel good about not being racist, feel good about loving one another as God loves us.

We can feel good about educating our children about the horrors of slavery and history. We can read books to our children about Martin Luther King, Malcolm X., Hank Aaron, Barack Obama, Rosa Parks, Harriet Tubman… and feel like we are doing our part to raise our children to love , be unbiased and with no prejudice. To teach them about all of the African Americans that have fought for and risked their lives against racial injustice. Somehow as white Americans we feel like that checks the box of doing the right thing. Not until this week did Drew and I realize THAT THIS IS THE PROBLEM.

Brittany elaborated that saying “I don’t agree with disrespecting the flag” was also implicitly saying that they don’t understand what the problem really is.

It says, “I don’t understand what you’re fighting for, and I’m not willing to hear you because of our preconceived notions of what that flag means to us,” she wrote.

“That’s the problem we are not listening, white America is not hearing. We’re not actively LOOKING for racial prejudice,” Brittany continued. “We have heard stories from men and women we have known and loved for years about the racism that occurred in their lives … stories that were never shared or talked about because somehow they were considered normal.”

She concluded with a heartfelt apology to anybody who was hurt or offended by the comments:

“To all of our friends and anyone we hurt … we will do better. We want to do better, we want to HEAR you, and we will fight for you because thinking we are not part of the problem … is checking the box it means we are are not doing enough.”

“It’s our job to educate ourselves,” she charged. “We are sorry.”