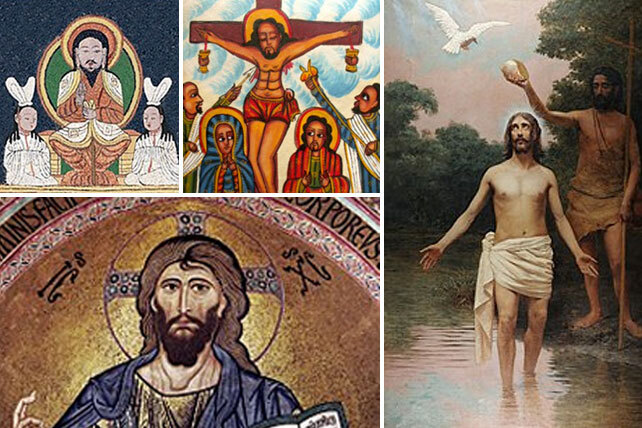 If you looked at Twitter today, you might have noticed the hashtag #Christianity and #CancelChristianity trending on that platform. On the best of days, Twitter can be a mixed bag. But when the world is in the throes of a pandemic and mass protests resulting from racial tension, Twitter feels more like a war zone. Shots have been fired lately over “white Jesus” or the depiction of Jesus as a white man, and the debate has sparked the #CancelChristianity trend. Some are using the hashtags to point out how Christianity has been used as a crutch for white supremacist ideologies while others don’t agree and feel like their religious beliefs are being attacked.

The hashtag, and the subsequent debate, seems to have evolved from a tweet by Shaun King, a social activist and former pastor. King said he thinks “statues of the white European they claim is Jesus should also come down,” referring to the recent moves across the country to take down monuments to Confederate leaders. King says the fact that these icons portray Jesus as a white person are “a form of white supremacy.”

Additionally, King said “All murals and stained glass windows of white Jesus, and his European mother, and their white friends should also come down. They are a gross form white supremacy. Created as tools of oppression. Racist propaganda. They should all come down.”

Yes, I think the statues of the white European they claim is Jesus should also come down.

They are a form of white supremacy.

In the Bible, when the family of Jesus wanted to hide, and blend in, guess where they went?

Several people responded to King’s tweet, countering his opinion by pointing out different cultures portray Jesus in different ways, with a variety of skin colors. Some cultures, like the Ethiopian Orthodox Church, depict him as having dark skin and more African features, whereas Syrian portrayals of Jesus make him look more Middle-Eastern than African. Others have pointed out that while Jesus’s parents may have taken him to Egypt, it may not have been to “blend in” so much as to live outside the realm of Herod’s reign. Still others say that Egypt itself has historically had so many different ethnicities and shades of humanity, so to speak, that the holy family could, in theory, have fit in among fair-skinned people there.

Still, King isn’t wrong in saying that a white portrayal of Jesus has been used by white, colonizing cultures as a means of elevating their own culture and justification to dominate other ethnicities. (For a more in-depth discussion on this topic, check out this video.) In an article King wrote some years ago in which he offers more explanation for his views than Twitter allows, he writes, “When the man who is deemed the central figure of a religion and indeed the savior of the entire world is consistently portrayed to look like a Scandinavian sailor when he more likely resembled a Syrian refugee, it’s being done to advance an Anglo-Saxon, white supremacist agenda.”

Since posting his opinion about the murals on Monday, King says he has received death threats and a barrage of messages from irate people. King believes the fact that some people are so upset over the notion that white portrayals of Jesus are tied to white supremacy “pretty much proves my point. Your religion is actually whiteness with a Christian patina.” He goes on to explain that he is a Christian himself, implying that he wouldn’t jump on the #CancelChristianity bandwagon that became associated with his comment.

I am a practicing Christian.

I am an ordained minister and was a Senior Pastor for many years.

If my critiques of the white supremacy within the Christian world bother you to the point of wanting to kill me, you are the problem.

Christian whiteness has ALWAYS been dangerous.

Some have taken the opportunity in the heated discussion to link Christianity with patriotism. That seems to be the case with Jenna Ellis’ tweet.

On Christ the solid Rock I stand.

And I’m proud to be an American.

Kristian A. Smith, pastor of Faith Community in Atlanta, Georgia, said that a problem he sees is that protesting white supremacy has been tied to trying to cancel Christianity.

This is a moment for everyone who says they follow Christ to connect to or strengthen our connection to the love, teachings and example of Christ.

When someone replying to her tweet linked what she was saying with Shaun King’s comments on white Jesus, she said her comments weren’t in reference to Shaun’s, although the two seem to be saying the same thing about Christianity being co-opted by white supremacy.

Do We Need to Re-Think White Jesus?

The debate raging on Twitter reminds me of the #metoo movement and its church iteration, #churchtoo. As our culture in America (and abroad as well) grapples with its racist history, we shouldn’t be surprised that the broader culture is holding a magnifying glass over the church as well. The question is, though, whether the church will take the opportunity to examine ourselves or ignore the relevant points brought up by our critics. And especially when that criticism is voiced by one (or many) of our own, how will we respond?

Perhaps what King’s comments show is that just as the broader culture is being asked to reevaluate its monuments and effigies, the western church also needs to reevaluate the images that we associate with Jesus and the disciples. Do our portrayals of him reflect who he is, or are they more indicative of who we think we are?

At the same time, instead of cancelling Christianity, perhaps a better, more accurate description of what is needed right now is #redeemChristianity or #reformChristianity, a trend many have been championing well…as far back as Martin Luther or even the time Paul rebuked Peter in Galatians.