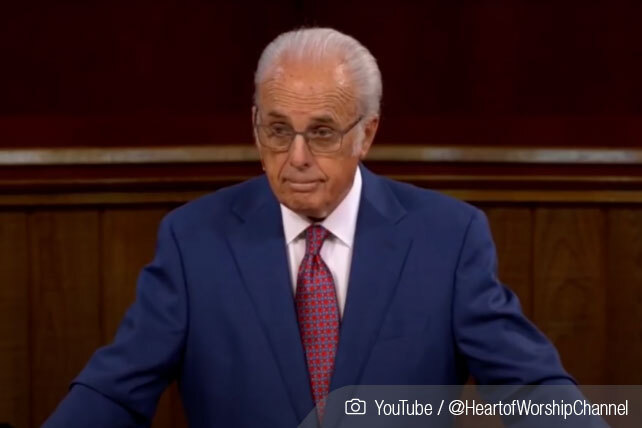 While church leaders such as Rick Warren, J.D. Greear, and Andy Stanley announced they will not reopen their churches for in-person services anytime soon, John MacArthur’s Grace Community Church in Sun Valley, California is staying open. This despite California Governor Gavin Newsom’s direction that houses of worship discontinue meeting indoors until the number of cases in California go down. MacArthur believes staying open is a “duty” mandated by Scripture.

“In response to the recent state order requiring churches in California to limit or suspend all meetings indefinitely, we, the pastors and elders of Grace Community Church, respectfully inform our civic leaders that they have exceeded their legitimate jurisdiction, and faithfulness to Christ prohibits us from observing the restrictions they want to impose on our corporate worship services,” MacArthur wrote in an article titled “Christ, not Caesar, Is Head of the Church.”

Grace Community Church is located in Sun Valley, California, in Los Angeles County, which is on the state’s watch list. Los Angeles county is the most populous county in the state (and the country, incidentally) and accounts for nearly half of the state’s COVID-19 cases.

For MacArthur, staying open is a matter of theology, not necessarily a matter of safety, as other leaders have cited in their reasoning to remain online-only. In fact, MacArthur doesn’t address health or safety in his article, simply what he believes Scripture has to say about congregating.

MacArthur says that Scripture instructs us to obey earthly authorities (Romans 13 and 1 Peter 2) so long as those authorities do not interfere the church’s obedience to God’s law: “Insofar as government authorities do not attempt to assert ecclesiastical authority or issue orders that forbid our obedience to God’s law, their authority is to be obeyed whether we agree with their rulings or not.” However, when those authorities’ commands reach over into the polity of the church, “compliance would be disobedience to our Lord’s clear commands,” MacArthur writes.

MacArthur goes on to say that “God has established three institutions within human society: the family, the state, and the church.” Those three institutions have their own “sphere of authority with jurisdictional limits that must be respected.” MacArthur believes it is the duty of each institution to maintain its own boundaries and ensure that the other institutions aren’t encroaching them:

When any one of the three institutions exceeds the bounds of its jurisdiction it is the duty of the other institutions to curtail that overreach. Therefore, when any government official issues orders regulating worship (such as bans on singing, caps on attendance, or prohibitions against gatherings and services), he steps outside the legitimate bounds of his God-ordained authority as a civic official and arrogates to himself authority that God expressly grants only to the Lord Jesus Christ as sovereign over His Kingdom, which is the church. His rule is mediated to local churches through those pastors and elders who teach His Word (Matthew 16:18–19; 2 Timothy 3:16–4:2).

As far as the church is concerned, Christ is its head, MacArthur states. Therefore, when Jesus said “Render to Caesar the things that are Caesar’s, and to God the things that are God’s” (Mark 12:17), he was making a delineation between the church and the state. According to MacArthur, since Christ has given pastors and elders the “duty and the right to exercise His spiritual authority in the church,” it is up to pastors and elders to mitigate what he sees as the current state overreach:

As pastors and elders, we cannot hand over to earthly authorities any privilege or power that belongs solely to Christ as head of His church. Pastors and elders are the ones to whom Christ has given the duty and the right to exercise His spiritual authority in the church (1 Peter 5:1–4; Hebrews 13:7, 17)—and Scripture alone defines how and whom they are to serve (1 Corinthians 4:1–4). They have no duty to follow orders from a civil government attempting to regulate the worship or governance of the church. In fact, pastors who cede their Christ-delegated authority in the church to a civil ruler have abdicated their responsibility before their Lord and violated the God-ordained spheres of authority as much as the secular official who illegitimately imposes his authority upon the church.

MacArthur makes it clear that he is not hinging his argument for remaining open on the Constitution of the United States (as some other ministry leaders have done):

Notice that we are not making a constitutional argument, even though the First Amendment of the United States Constitution expressly affirms this principle in its opening words: “Congress shall make no law respecting an establishment of religion, or prohibiting the free exercise thereof.” The right we are appealing to was not created by the Constitution. It is one of those unalienable rights granted solely by God, who ordained human government and establishes both the extent and the limitations of the state’s authority (Romans 13:1–7). Our argument therefore is purposely not grounded in the First Amendment; it is based on the same biblical principles that the Amendment itself is founded upon. The exercise of true religion is a divine duty given to men and women created in God’s image (Genesis 1:26–27; Acts 4:18–20; 5:29; cf. Matthew 22:16–22). In other words, freedom of worship is a command of God, not a privilege granted by the state.