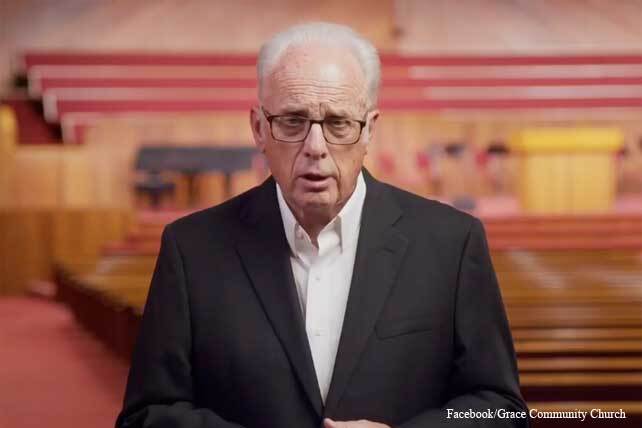 John MacArthur, lead pastor of Grace Community Church Sun Valley, California, recently made waves by announcing his church would remain open despite the second round of closures ordered by the state government of California. Over the weekend, MacArthur doubled down on his position and said he’s not “nervous” about the situation the church is in. Rather, he sees the whole thing as an “incredible opportunity” to be the church during this trying time.

“What is disappointing to me is how few churches are standing up. How few large churches or even Christian leaders are willing to say ‘We’re not going to bow to Caesar. We’re going to serve our Lord,'” MacArthur said during an update video posted to the church’s account.

“Large churches are shutting down until—they say January,” MacArthur said incredulously. “They don’t know what a church is and they don’t shepherd their people,” MacArthur added. “Significant leaders aren’t giving any strength and courage to the church. They’re not standing up…rising up…and calling on Christians to be the church in the world,” he lamented.

While it’s not clear which churches MacArthur was talking about, some big churches such as J.D. Greear’s Summit Church in North Carolina and Andy Stanley’s North Point Church in Atlanta, Georgia have recently announced they won’t be opening for in-person services until next year.

MacArthur stated that for 51 years, Grace Community Church has remained faithful to the preaching and teaching of God’s Word and because of that they have seen God’s divine providence.

The church isn’t unsympathetic to those members who don’t feel safe gathering just yet, though. MacArthur emphasized members can continue to stay home and watch the live stream if, for instance, they have compromised immune systems. Additionally, the church is adding outdoor seating starting this coming Sunday to accommodate around 1,000 people who may still be concerned about being in closed areas with others. MacArthur said, “we want to make people feel welcomed.” The church will provide hand sanitizer, masks, and water to those choosing to sit outside.

The Church May Face Legal Problems

Franklin Graham posted on Twitter shortly after Grace Community Church published the update from MacArthur. Graham wrote, “After Pastor @JohnMacArthur announced that his congregation at @GraceComChurch in Sun Valley, CA, would be assembling in obedience to God’s Word, he received a letter from LA county officials threatening repercussions such as fines & possible arrest.”

After Pastor @JohnMacArthur announced that his congregation at @GraceComChurch in Sun Valley, CA, would be assembling in obedience to God’s Word, he received a letter from LA county officials threatening repercussions such as fines & possible arrest. https://t.co/IKX2FSmdyc

This isn’t the first time that Grace Community Church has gone through legal trials. The church was sued back in the 70’s and 80’s for clergy malpractice. After ten years, the Supreme Court upheld the ruling of California’s Supreme Court and found Grace Community Church not guilty of clergy malpractice. MacArthur claims the suit was an attempt to stop them from teaching Scripture.

During his update, MacArthur addressed another point of controversy that has come up recently. MacArthur said some people are talking about the church receiving stimulus money from the federal government earlier this spring. The church did receive a check, however MacArthur says they sent the money back.

John MacArthur’s and Grace Community Church’s statement “Christ, not Caesar, Is Head of the Church” has garnered over 21 thousand signatures, with several thousand of those being pastors and churches, MacArthur said.

An Important Update From Our Pastor

An important update from Pastor John about what’s happening on our church campus on Sundays.