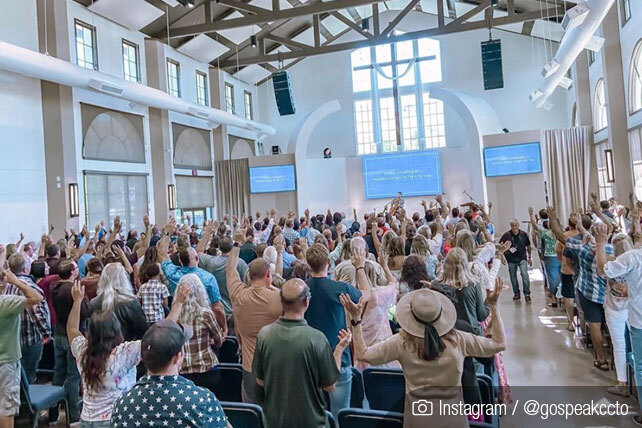 Pastor Rob McCoy and the congregation he shepherds at Godspeak Calvary Chapel in Newbury Park, California were sued by Ventura County and issued a two-week temporary restraining order barring them from worshiping indoors. A trial is set for August 31st. However, the church has decided not to heed the restraining order. Pastor McCoy said, “I wish it didn’t have to come to this, I really do, but we will be violating the judge’s order. We will be open this Sunday.” The church proceeded to host three live worship services this weekend.

In an interview Friday, Pastor McCoy told his congregation “Come to church, and if you’re one of the first thousand, you win a prize. You will get a citation. It will be a misdemeanor, it’ll go on your record; be mindful of that.”

According to KABC, Godspeak Calvary Chapel drew counter-protestors as they gathered on Sunday. One man attempted to rip the sign out of a lady’s hands who was there because the church was not requiring face covering or physically distancing. The lady was thrown to the ground, but not hurt. The church’s security said the man who initiated the attack does not attend the church.

Before the services on Sunday, Ventura County Sheriff’s Capt. Shane Matthews was reached on Saturday and he indicated the sheriff’s department was not planning on enforcing the restraining order. “We’re not going to take a proactive stance and disrupt the church service,” he said.

McCoy said there has been no members of Godspeak Calvary Chapel that have tested positive for COVID-19.

Why the Legal Action?

The Associated Press reported last week that Ventura County (which is located just outside of Los Angeles) leaders have approved the use of restraining orders and “other enforcement actions” against businesses and those that defy the state’s mandated social distancing orders.

On Wednesday, August 6, 2020, neighboring Los Angeles Mayor Eric Garcetti held a press conference saying that he has authorized water and power departments to shut off utilities for houses, businesses, and ‘large gatherings’ that violate health orders given to the state due to the spread of COVID-19.

The term “large gatherings” in the past has referred to churches (houses of worship).

“Starting on Friday night, if LAPD responds and verifies that a large gathering is occurring at a property, and we see these properties offending time and time again, they will provide notice and initiate the process to request that DWP shut off service within the next 48 hours.”

Garcetti put the rule in place for those “people determined to break the rules, posing significant public dangers and a threat to all of us.” The mayor called these gatherings of people unsafe and said they could “cost Angelenos people their lives.”

Mayor Garcetti made the same threat back in April when similar state restrictions were put in place. As to our knowledge no churches (houses of worship) were affected by the Mayor’s threat during that time.