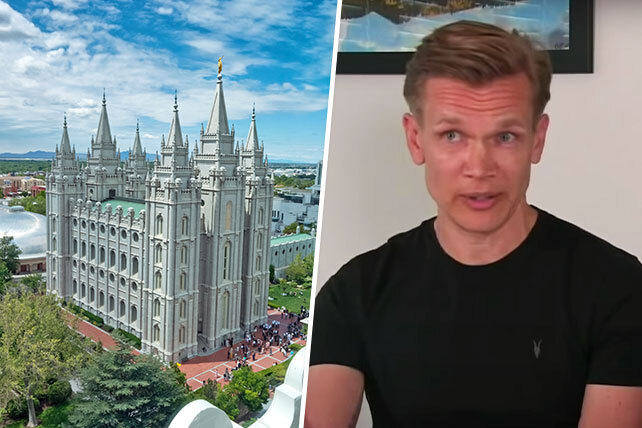 Accusing his former religious group of fraud and “corporate greed,” a member of a prominent Mormon family now seeks the return of more than $5 million in tithes. In a federal lawsuit filed this week, James Huntsman charges that the Church of Jesus Christ of Latter-day Saints (LDS) funneled members’ donations into commercial ventures and “repeatedly and publicly lied” about its financial dealings.

Huntsman says he has “repeatedly” asked the “LDS Corporation” to return his donations, without success. His plan, he says, is to give the money instead to “organizations and communities whose members have been marginalized by the Church’s teachings and doctrines, including by donating to charities supporting LGBTQ, African-American, and women’s rights.”

Huntsman, who left the LDS last year, runs a film-distribution company in California. He’s the brother of former Utah governor and U.S. presidential candidate Jon Huntsman Jr. But the lawsuit is “not a family issue,” says David Jonelis, James Huntsman’s lawyer. The suit also maintains that Huntsman has “the utmost respect” for LDS members and beliefs; however, it says the “Corporation failed to treat Mr. Huntsman with the same respect.”

Though James Huntsman says the financial damage he suffered isn’t “yet fully ascertained,” it is “in excess of” $5 million. “Make no mistake,” states the lawsuit, “the Church’s status as a religious organization does not give its corporate arm carte blanche to defraud the Church’s members and the general public.”

Huntsman alleges that instead of using monetary donations “for the promised purposes”— to fund missions work, infrastructure needs, and education—“the LDS Corporation secretly lined its own pockets by using the funds to develop a multibillion-dollar commercial real estate and insurance empire that had nothing to do with charity.” The suit adds that faith isn’t the issue; instead, “it is a case about fraud and corporate greed.”

Huntsman’s suit references a 2019 whistleblower complaint from David Nielsen, a former investment manager for the LDS who raised concerns with the IRS about the body’s $100 billion “rainy day” fund. Nielsen claimed that $2 billion of that went toward private ventures, including a Salt Lake City shopping mall. Through that complaint, states Huntsman’s lawsuit, Nielsen “bravely lifted the veil on the LDS Corporation’s fraudulent financial activity.”

When Huntsman demanded that his offerings be returned, according to his lawsuit, LDS leaders refused, “effectively taking the position that it could do whatever it wanted with tithing funds.” The court filing notes, “Hopefully this lawsuit will put an end to the LDS Corporation’s lies and deceit once and for all so that the church can refocus its attention and efforts on following the path of righteousness and honesty paved by its former leaders.”

In its reporting on Huntsman’s lawsuit, The Washington Post states, “Mormonism, like some other faith groups, requires members to tithe 10% of their incomes but is more organized and deliberate about collecting it and understanding why members cannot pay.” LDS reportedly receives more than $7 billion in donations annually.

LDS spokesman Eric Hawkins issued a statement calling Huntsman’s claims “baseless,” adding, “Tithing funds are voluntary contributions” by LDS members that are given “as an expression of their faith in God. They are used for a broad array of religious purposes, including missionary work, education, humanitarian causes, and the construction of meetinghouses, temples, and other buildings important in the work of the Church, as reflected in scripture and determined by Church leaders.”

Hawkins also reiterates comments from former LDS president Gordon B. Hinckley, who said as early as 2003 that the Salt Lake City mall was funded through “commercial entities owned by the Church” and “earnings of invested reserve funds.” LDS officials also deny being engaged in talks with the IRS about Nielsen’s complaint, which he filed with his twin brother, Lars.